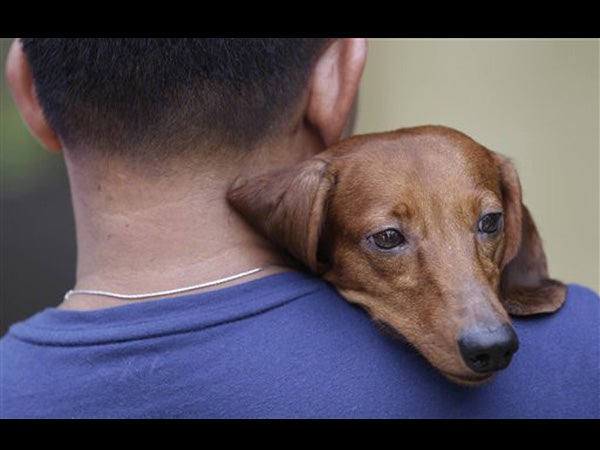 PHILADELPHIA — After a fire broke out at Dorothy Phillips’ apartment in Philadelphia, the Red Cross gave her a temporary place to stay. Unfortunately, the shelter would not accept her beloved dog, Max.

Who would care for him while she looked for a new home?

“As far as I’m concerned, he’s one of my grandbabies,” Phillips said.

Max is now being boarded in a kennel in a Philadelphia suburb thanks to Red Paw, an animal rescue group that has a unique partnership with the southeastern Pennsylvania chapter of the American Red Cross.

The nearly 2-year-old Philadelphia-area agency uses a network of volunteers, foster homes and other animal welfare groups to care for pets whose owners are struggling to rebuild their lives. Help includes veterinary care, pet supplies and temporary boarding — all free of charge.

“We don’t want to see anyone lose their pet because of something completely out of their control,” Red Paw founder Jen Leary said.

Leary started the nonprofit after seeing the heartbreak and confusion of too many pet owners during her work as a city firefighter and Red Cross volunteer. Red Paw then teamed up with the local Red Cross about 18 months ago.

Before Red Paw, the Red Cross had no uniform approach to handling displaced animals — each case depended on the location of the disaster and the available responders, Red Cross spokesman Dave Schrader said.

Red Paw is now the go-to group whenever Red Cross clients need help with their animals. It’s a model that Leary hopes to replicate in other states.

“Knowing that their pets will be cared for certainly reduces the trauma,” he said.

Red Paw volunteer Kat Nania recalled going out one snowy night in January after a fire had destroyed a house in southwest Philadelphia. A cat was missing, and its owner said the feline had just birthed a litter of kittens.

Nania feared the worst when she entered the ruins of the house — its ceiling fallen in, broken glass everywhere, the interior staircase more like a hill than steps. But there, hiding behind a mirror, was a still-pregnant Tabitha.

“She was just so frightened, she let me scoop her up and put her in the carrier,” Nania said. “When I felt her pregnant belly, I was just like, ‘Yes!'”

Tabitha gave birth within a day of the rescue. But she and her kittens need a permanent home now; their owner could no longer care for them and surrendered the animals to Red Paw to put up for adoption.

“The goal is always to reunite people with their pets,” Leary said. “But sometimes after losing everything they had, it’s hard to do that.”

Red Paw aims for reunification within a month, but Leary conceded it can take much longer. The agency was able to reunite 86 families with their pets last year; an additional three dozen animals were surrendered and re-adopted.

Max, the German shepherd-pit bull mix owned by Phillips, remains in the group’s care while Phillips looks for a new home. She isn’t sure when she’ll have one, but she calls constantly to check on her dog.

In Philadelphia, the city’s animal control organization will also respond to animals left homeless by disasters, executive director Susan Cosby said. But Red Paw’s capacity for crisis response is valuable because it eases the burden on her agency, which deals with more than 32,000 stray and surrendered animals per year.

“They’re able to work in a far more specialized way with the animals and families that they’re helping,” Cosby said, later adding: “We can’t do it alone. There’s just too much work to be done.”