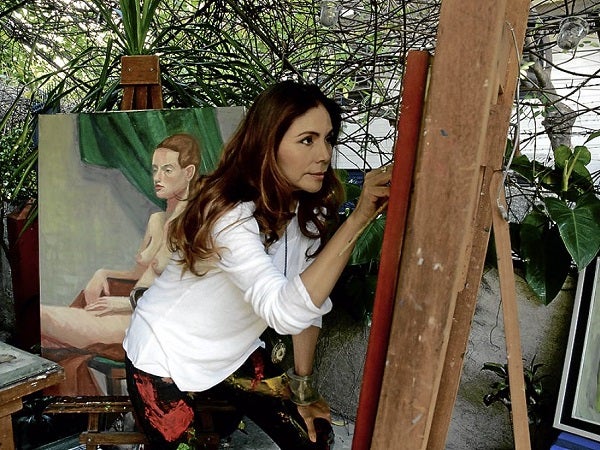 Artist Mariko Jacinto is a ‘Partee’ girl and a Buddhist 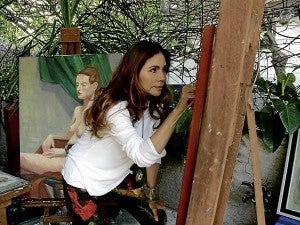 Leaning over a large canvas, artist Mariko Jacinto was a picture of serene concentration as she spread white amalgam with a small palette knife. The tool made a soft scraping sound as she explained how the surface must first be primed before a single brushstroke is made.

Like a blank canvas, Jacinto continues to seek new knowledge and experience as primers for her evolution as an artist. “I’m not into routine—everything changes,” she said.

Those changes are seen from as far back as her early pieces featuring classic themes such as cityscapes and still-lifes, to more recent works showing interest in expressionism.

For the past four years, Jacinto has been studying abstract painting at the Art Students League in New York City, where she spends half the year visiting her daughter. “I love the philosophy behind it,” she said about abstract art. But it has not supplanted her love for figurative painting. “To be able to capture the invisible in a subject is the most challenging and exciting for me. It’s what I sense to be the message.”

Jacinto’s figurative and portrait paintings display a mix of realism and expressionism, at once depicting snapshots of real people while interpreting the intangible spirit of the moment. Her “Club” series exemplifies this approach and she credited her immersion in Manila’s vibrant social scene for imbuing her work with palpable energy.

“I believe that when you paint what is in your current environment, you are able to get more of the essence of it,” she explained. “Without even analyzing what to paint when I start the next day after a party, it just all comes out.”

She continued: “What I am able to capture is not really what people look like, but the (mood)—this is how they enjoy themselves and have fun.”

Her portraits are not meant to be like painted photos, but rather something ephemeral captured on canvas. Nothing pleases Jacinto more than when the subjects of her portraits tell her that her vision is spot on. “It is the greatest feeling as an artist when I paint in the middle of 20 other artists and the model says (of her work), ‘This is me!’”

For subject matter, Jacinto draws primarily from personal experiences, but she has also done commissioned works, such as a portrait of Chuchu Madrigal Eduque’s daughters, Michaela and Alexandra.

The painting shows the two young girls relaxing in a scene that brings to mind the work of the great American portrait artist John Singer Sargent, who painted the children of New York’s elite society during the late 19th and early 20th centuries.

Jacinto cites Sargent, Vincent Van Gogh and R.B. Kitaj as artistic influences. Admiration, however, does not mean emulation of their styles. “I don’t paint like Van Gogh, but his passion and emotions are so strong that it really affects me,” she explained. “And I like Kitaj because I see a lot of freedom in his work.”

Freedom is an apt word to describe Jacinto’s style, even as she demurs from categorizing herself. “I do what I please and I don’t think about the direction (my work is going). But other artists say (about my work), ‘Oh, that’s a Mariko,’” she recalled with a laugh. “What is really important to me is that I’m happy painting.”

Her happiness and contentment with life at the moment are evident in her bearing. Like her paintings, the half-Japanese, half-Filipino Jacinto embodies a similar contrast of quietude and passion. Her soft-spoken demeanor is often punctuated by bright laughter and bursts of energy as she springs up to find a particular canvas under discussion.

With her flawless complexion and petite figure, dressed in a simple white top and skinny black jeans artfully splashed with bright color that she created herself, it is easy to picture her in a kinetic club scene and not even realize that she is, in fact, already a grandmother.

Jacinto emphasized that although she has been out of the art scene for a few years, she hasn’t been idle. Having finished her “Club” series, she is now painting a new collection inspired by her travels in Tibet. It was an enlightening experience for Jacinto, a practising Buddhist.

“Even before [the trip], I was so affected by Tibetan monks [who committed self-immolation]. It made me think about what makes a person do that—the cost is just so deep,” she said.

Now, she returns to the art scene with an exhibit entitled “Partee” at the Pinto Art Museum and Gallery, featuring works depicting the whirlwind gatherings of New York and Manila societies.

As she prepared for the show, to run from April 7-21, Jacinto continues to paint in her Paco, Manila, home, where she spends hours either in her studio tucked behind the house or on her front porch, shaded under a canopy of trailing vines.

As content as she is with her life at the moment, Jacinto has weathered difficult periods in her life, but she counts those trying times as part of her evolution.

“It’s like being a lotus flower,” she said, evoking the familiar symbol of Buddhism. “Even if it grows in a muddy pond, a beautiful flower still comes out—something good and enlightened is created.”