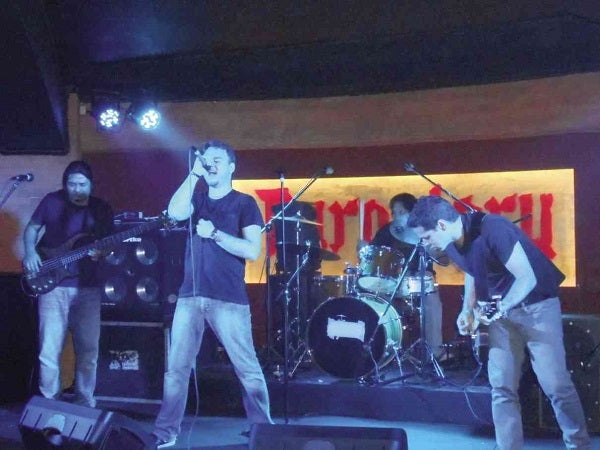 ‘Strumming my pain, killing me softly’

It is 7 p.m. on a Saturday, and at the hotel’s veranda behind the lobby, an acoustic pop quartet called Brownskin is playing soft ballads—Carole King’s “It’s Too Late,” D’Sound’s “Tattooed on My Mind,” and the Petula Clark hit “Call Me.”

It’s the kind of music that can soothe frayed nerves and put you to sleep, like an aural equivalent of Prozac. But our interest is piqued when Brownskin proceeds to perform Toto’s “Georgy Porgy,” which not a lot of local groups care to cover; in fact this is the first time we hear this ’70s jazz-R&B classic rendered live in a hotel club setting.

Brownskin’s vocalists, Mylene Madrelejos and her husband, Lito Baroga (who also plays lead guitar), are not conscious of the fact that they sing the song’s lyrics in a hard Filipino accent: “Georgy Porgy, pudding pie/Keezed the girls and made them cry…” A snooty type of audience would have made fun of it or smirked, at least, but tonight the sprinkling of Caucasians watching while sipping their beers are nodding their heads to the beat.

We are surprised when the tune segues to Roberta Flack’s “Killing Me Softly”—Madrelejos looking serious, if a bit nervous. Again we notice her Pinoy accent stressing the song’s sense of anxiety and dread: “Keeling me softly with his song…”

Somehow it’s not laughable anymore, this thing about having to pronounce English lyrics the way Americans did, because we’re simply not like them. It’s like listening to how Italians speak naturally with their accents, without them bothering to distinguish between the long and short “i” or “e.”

In any case, what’s apparent is that Brownskin has been around for quite some time, probably as a hotel or a cruise liner act, judging by its repertoire which includes Spanish (“Besame Mucho”) and Brazilian Portuguese (“Mas Que Nada”) standards.

Which turns out to be true, as Madrelejos tells us during a break. She has been to China, Japan, and other countries as a singer with other hotel-based groups. Baroga, on the other hand, has been playing in a luxury cruise liner for the past nine years.

Brownskin’s other members, guitarist Korina de la Cruz and percussionist Maverill Madrelejos, are newbies who are being trained for future gigs here or abroad.

There’s just one thing that bothers us: Why does Madrelejos stand stiff like a tree when singing, not even swaying a bit during upbeat moments, as if we’re still watching those black-and-white Pinoy musical movies of the ’60s where the star performer and the band look like they’re frozen in time?

But we don’t want to force her to change her style if she’s not comfortable. What matters most is that Brownskin does not bore us to death, especially when it sneaks in Michael Franks’ “Antonio’s Song” and The Cure’s “Lovesong” just before we leave, after finishing two San Miguel Pale Pilsens (less than P100 each, inclusive of taxes).

The beer, by the way, needs more cooling. It doesn’t taste good when ice is added.

In direct contrast, a bar called Purgatory (2/F, Concorde Bldg., Salcedo cor. Benavidez St., Legaspi Village) in Makati flares with the passion and ferocity of a band whose sound fits the character of the place—dark, foreboding, a bit creepy, but all in the spirit of fun.

It is past 10 p.m. on a Friday, and Wolfgang is onstage, whipping up a storm of raging rock tunes as if its members  never grew old. The band has been around since 1992; it has released eight albums—the latest, “Ang Bagong Dugo sa Lumang Ugat: Unang Kabanata” came out only last year.

As the band plays on, we are reminded of Metallica as well as Led Zeppelin and all the great heavy metal pioneers from which Wolfgang crafted its sound. The angry, sometimes despondent views that Artadi expresses in Wolfgang’s songs find catharsis in Legarda’s exhilarating licks. In fact, this is what the whole ruckus is about: releasing one’s hang-ups or frustrations through the power of heavy rock.

When a male fan shouts out a request for “Halik ni Hudas,” Artadi retorts with a cuss word, admonishing the overeager guy because the band has not even finished playing. The crowd breaks into laughter.

We notice that there’s a mix of young and old in the audience; they’re here because they like Wolfgang and intense rock music. They all look like happy souls in Purgatory.

Near the gig’s end, Legarda improvises with passages from Jeff Beck’s live guitar version of The Beatles’ “A Day in the Life.” We savor it as we drink San Mig Light straight from the bottle.

The bar chow of bagnet tastes fine with the soy sauce-and-vinegar dip.

To which Lizza replies: “Ah, yes, but that paunch will be gone when the band resumes its Tanduay tour soon. This is a warm-up gig.”

Lizza’s in a good mood. We used to see her raising hell back in the days when she was handling Rivermaya. Or maybe she has mellowed down, even as listening to Wolfgang can be agitating.

We ask Artadi: “Why are you still at it? What keeps you going?”

He pauses, before answering: “I’m still having fun!”