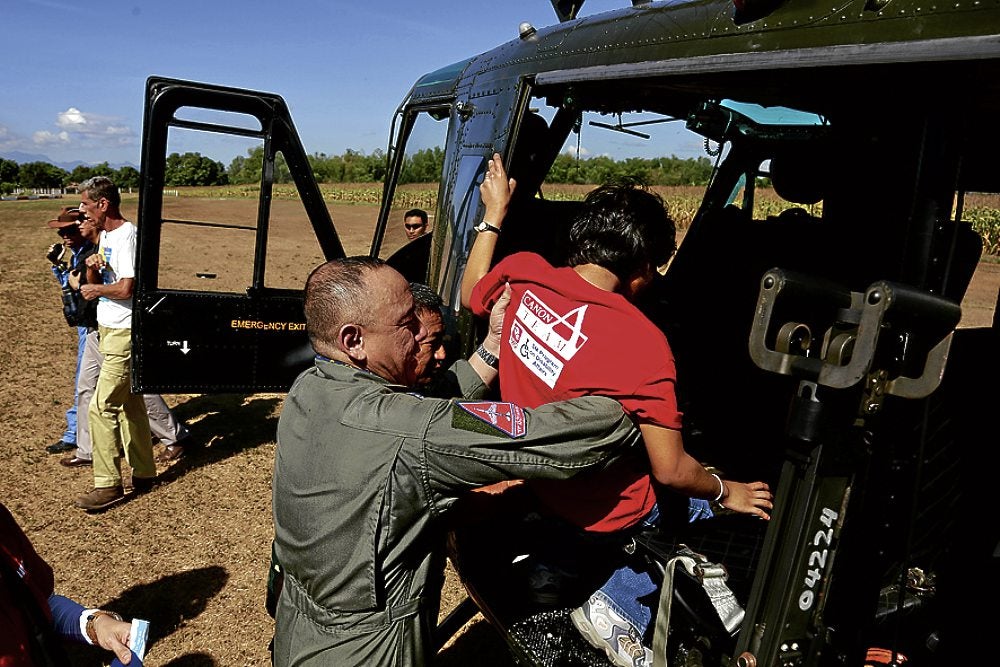 Special kids take to the skies

To many, flying is a common activity, but to a group of children with special needs, it was all but a dream—until recently, when volunteer pilots from the Angeles City Flying Club (ACFC) turned this dream into reality for 40 kids from Chosen Children’s Village, Precious Community and SPED school in Angeles, Pampanga.

Dubbed “Reach for the Sky 3,” the event, on its third year, was organized by Photography with a Difference (PWD), in partnership with the Pampanga-based flying club.

PWD, which interestingly is also an acronym for People with Disabilities, is a group of volunteer photographers who organize activities for children with special needs throughout the country. Their goal is to help promote understanding and awareness of people with disabilities.

“We try to focus on activities that will be unique and fun for the kids and parents, but since it is an advocacy, we also want to make sure the activities are interesting enough to attract viewers and help increase awareness and understanding of our beneficiary organizations,” says PWD Core Group member Agnes Lapena.

As early as 6 a.m., the excited participants began to arrive in the airfield with several similarly excited pilots from ACFC greeting them in their ultralight aircraft.

“This event is something our pilots look forward to every year, and it’s great fun organizing it, and every year we try to level up and give the participants, especially the kids, something new and exciting to experience,” says ACFC president Terry Hockenhull.

As the kids got off the bus, they were led to a slew of activities that included a treasure hunt, parlor games, candy buffet, photo booth and petting zoo.

Organized into small groups of five to six, with their guardians, the kids were basically asked to simply enjoy the day and to try as many of the activities as they wanted.

“As it is the third year, we wanted to give the event a different feel, so a country fair theme was adopted, which gave the kids more activities on the ground and our partners more opportunity to interact with the kids,” says Lapena.

But of course, the highlight was still flying, since that was what the kids were there for.

Strapped into the ultralight, a small fixed-wing light aircraft, pilots took turns bringing kids up above Woodlands Air Park for an unforgettable experience.

Joining pilots from ACFC was a Huey helicopter from the Philippine Air Force. Unlike the ultralights that can take only one passenger at a time, the chopper took several groups of eight passengers composed of kids, guardians and volunteers on several trips around Pampanga.

“The Philippine Air Force was there at the inception, and will continue to support this event for as long as it runs,” says Col. Miguel Okol.

Just like in previous years, each child and guardian will be partnered with Canon’s “A-Team” volunteer photographer who will not only document the day’s activity but also act as a big brother or sister to the child.

“The job of each volunteer photographer is to capture images that can be used for an exhibit to help promote awareness and understanding of special kids,” says Myh Lapid, a teacher and volunteer photographer, “but you can’t help going beyond that, especially when the kids cling to you—literally.”

The culmination of the event will be a roving photo exhibit in several SM Malls, featuring images from volunteer photographers printed by Canon Marketing Philippines.  Both companies are original supporters of Reach for the Sky, and other activities of the PWD volunteer group.