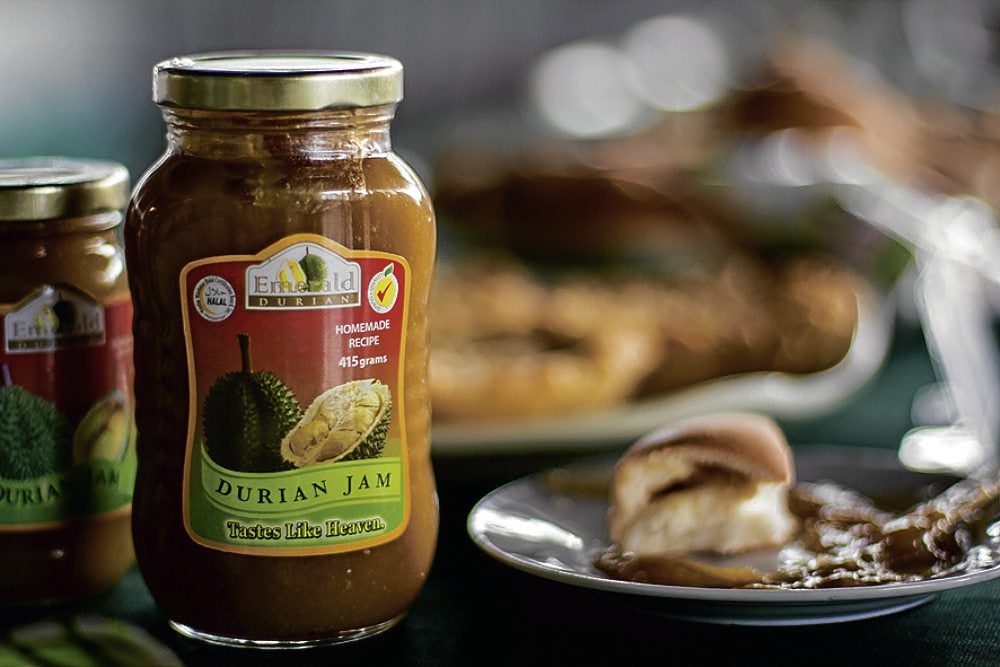 If summer were a fruit, it would taste like durian.

Ah, such heady creamy sinfulness! And the sticky thereafter of its telltale smell! Durian, a Malay word that means “the thorny fruit,” is summer’s harvest of danger and delight—what to relish and resist in the same, well, mouthful.

These messy summer memories are given an ingenious, elegant twist at Emerald Durian in Tagum City, where proprietor Alma L. Uy sometimes welcomes visitors with a table groaning with such pleasures as these: durian yema, durian cookies, durian bun, durian brazo de Mercedes, durian jelly roll, durian cake, and just about any durian baked goodie she can think of.

Four of her concoctions stand out. The durian tart is a subdued triumph of textures, the piquant signature taste tempered by the calm, crumbly confection of its unassuming but baked-to-perfection shell.

The durian hopia is a durian-all-you-can experience, every bite a roll-your-eye high.

Then there’s the durian jam—a shameless summery slush which can out-durian the very fruit itself.

All this durian yumminess is distilled in the tiny must-munch that is the durian pastillas. It packs a punch of durian poetry, and then nothing else matters because you are in that quintessential durian moment.

“This is Davao and we have a lot of durian,” says Alma, whose husband, Rey, is the city mayor. (He is not running for office in this election season.)

The couple has lots and lots of durian: 7,000 durian trees spread out in an aggregate land area of 50,000 ha in the Davao Region.

In 2006, she put up Emerald Durian with a startup capital of P50,000. She converted an unused bodega beside their residence into a production area. “I had two employees and my sister and my daughter Ciara,” she recalls. “We did everything by hand. It was exhausting and time-consuming. Our packaging was crude—just cellophane and Styropor.”

But she had faith in her recipes and her sense of experimentation. In its first year, Emerald Durian sold P1.3 million worth of durian sweets. In 2008, the amount doubled. Don’t look now, but last year’s gross sales was P8 million. Today, the bakeshop has state-of-the-art facilities, with a 10-ton refrigeration capacity that should ensure ever more sales ahead.

Quips  Alma: “Schools from neighboring Davao City and even as far as Leyte send their students here to do their OJT with us.”

She welcomes the students without worrying that they will go away with her recipes, saying that she would be happy if the students become successful, too.

“Sometimes, I wonder how I got into business when I am a nurse by profession,” she says. “But then my father was a Chinese from Xiamen and he had a sari-sari store aside from a buy-and-sell business. My mother was a Filipino teacher. My sister, my two brothers and I must have absorbed our father’s entrepreneurial energy while following our mother’s strict discipline regarding our schooling.”

She spent her grade-school years in Tagum City and high school  in South Cotabato. After earning a nursing degree in Cebu City, she went back to Tagum and worked as a nurse in the Hijo banana plantation in Barangay Madaum. Guess who lived there as well? Her husband-to-be.

“I suppose that with my husband in politics, I had to make sure that there is food on the table for our children, thus my entrepreneurial ventures,” she lets on.

“Yes, I named Emerald Durian after my daughter because I wanted her to have this business,” she says, “but all my children are pursuing other things, and so here I am, still cooking up more durian goodies for those who like durian.”

That means us, and just about everyone else.