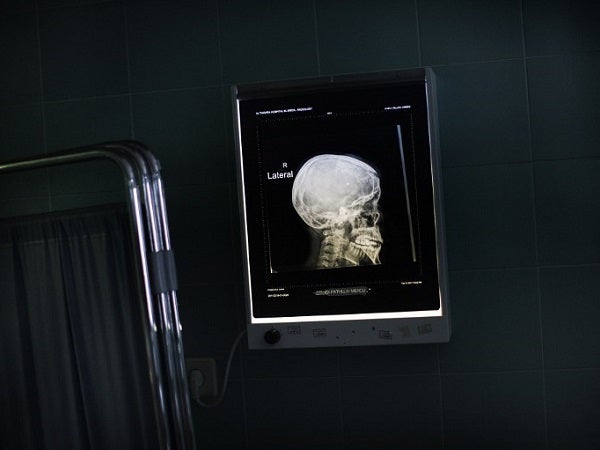 The X-ray scan of a wounded anti-regime demonstrator shows a bullet lodged in his brain while he is nursed at the intensive care unit at a hospital in the eastern city of Tobruk on February 25, 2011. Scientists said Wednesday, April 10, 2013, they have figured out how to recognize pain in brain scans, possibly paving the way for future tests that could accurately gauge its severity. AFP PHOTO/MARCO LONGARI

WASHINGTON—Scientists said Wednesday they have figured out how to recognize pain in brain scans, possibly paving the way for future tests that could accurately gauge its severity.

“Right now, there’s no clinically acceptable way to measure pain and other emotions other than to ask a person how they feel,” said Tor Wager, lead author of the paper, published in the New England Journal of Medicine.

For the study, magnetic resonance imaging brain scans were performed on 114 volunteers as heat was applied to the left forearm, ranging from warm to hot.

Researchers thought they would find a unique pain signature in each individual, since pain is measured differently among people and some are more sensitive than others.

However, they were surprised to find that the signals they found in the brain were transferable across different people, allowing scientists to predict how much pain a person was feeling with 90-100 percent accuracy.

“We found a pattern across multiple systems in the brain that is diagnostic of how much pain people feel in response to painful heat,” Wager said.

A subset of participants who had recently gone through a romantic breakup and were still heartbroken were shown an image of their ex.

Although past studies have suggested that the brain activity of a spurned lover is similar to a person experiencing physical pain, this study found that the heat-pain signature was absent in the lovelorn people.

Researchers also found that the brain signatures for pain decreased in patients who had been pretreated with painkillers.

While the technology is not yet widely available, researchers hope that in the coming years it could lead to the development of the first objective tests of pain, and perhaps help study and alleviate chronic pain.

The research was led by Wager, an associate professor of psychology and neuroscience at University of Colorado at Boulder, along with colleagues from New York University, Johns Hopkins University and the University of Michigan.