‘I was a victim of verbal bullying’ | Inquirer Lifestyle 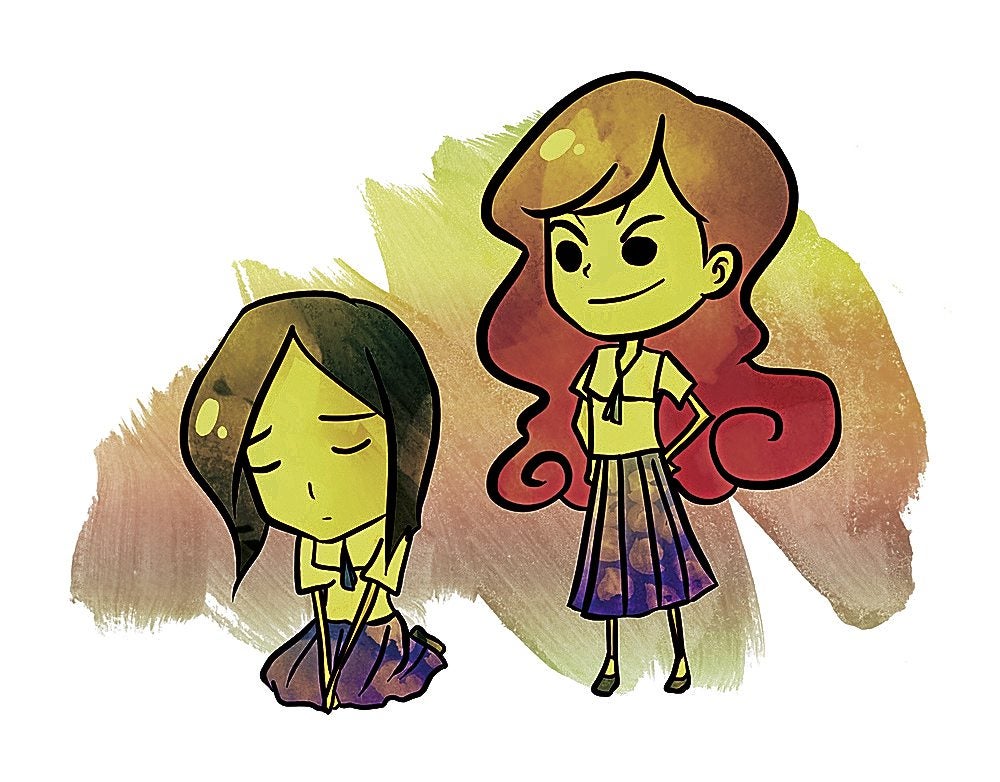 ‘I was a victim of verbal bullying’

For so long, girls have been put down because of our perceived inferiority. We are victims in the sense that we are prone to bullying. These girls may be the bullies, or the bullied.

Among girls, verbal bullying is everywhere, from the spreading of rumors around school and on the Internet to just straight-out bashing of someone’s self-esteem. Bullying affects each one differently, with some having worse coping mechanisms than others.

I myself have been a victim of verbal bullying many times, to the point that I lost all motivation to do anything.

I was once put down simply for being morena.  As a child, I grew up in a family of mestizos—my mother, sister, brother, and my mom’s side of the family. This alone made me feel left out, and I wished upon many stars that I would eventually grow out of my color.

Being in an international school setting did not make my situation easier. I hated participating in sports or going to the beach for fear of becoming darker. People would ask why I bothered to put sunblock, as it never works anyway. My mom was one of these people, as she always chided me for having been in the sun too long.

For two school years, I was likened to an animal. I felt pretty lost. I didn’t know what to do.

Being shallow at that time, I thought changing my appearance would stop the taunts. Obviously, I couldn’t do much to change how I looked, and so I resorted to trying—but failing—to ignore the taunts. It still makes me sad to think about some of the comments.

We have this huge hunger that can only be sated by acceptance in society. Rejection is probably our worst fear—being rejected not just by the one we want, but also by society, our family and our friends. In a nutshell, it sucks to be unaccepted, which is why we tend to have fabricated portraits of ourselves based on what we wish to be.

There are many ways a teenage girl can be put down. For us, it takes a long time and lots of assurance to build confidence, but only one negative comment can break us and make us sad.

We are put down not only by the negative comments of other girls,  but also by guys’ mean actions and words. For example, when guys objectify us, we are belittled. As they “inspect” us (“check us out” in a negative way), their eyes are trained to look for flaws, and not the beauty in a person.

A friend of mine was nicknamed  “Pizza Face” by guys. This definitely damaged her self-esteem, and she felt the need to wear layers of makeup just so the taunts would stop.

Another friend had been bullied by guys who would comment about her frail form. She had been labeled “stick” or “ruler” just for being underweight. These small comments make us girls feel as though we need to look a certain way in order to be liked.

Another type of bullying is cyber-bullying, where disrespectful and unpleasant things are said on the Internet. Fights have broken out on Facebook because of the hostile ways of some girls, who pick a fight for the most stupid reason.

One time, a girl posted a picture, in which she tagged herself. The comments were harsh, as many of the “popular” girls thought that her tagging herself had been a means of getting more likes, as the picture would show up more on people’s news feeds. The girls would comment, “Lol, why did you tag yourself? Someone’s vain ;),” and  other people joined in and laugh.

Someone I know had once been put down because of his father who had been a convicted felon, and as a child, he had trouble making friends. In short, he was mostly alone in childhood, as many people were scared of him.

He had a hard time inviting kids over for a play date. Everyone had judged him, likening him to a criminal because his father was.

Verbal abuse could lead to depression due to falling self-esteem. The girl might resort to self-harm or illegal substances. I had a friend who harmed herself because of a bully. The bully found out about her little secret and told everyone, saying that my friend should check into a mental hospital for her weird habits.

She even went as far as starting a rumor that my friend was a sadist. She then mocked and threatened my friend, saying that she would tell the guidance counselor to get her into a psychiatric ward.

When my friend finally fought back, the bully was infuriated and told everyone that she wanted to “shoot the girl,” and “drown” her in the school’s swimming pool. These horrendous threats affected my friend, as she became more and more withdrawn, to the point where she just sat alone with her book, reading to pass the time.

Another effect of bullying may be a loss of motivation, as one slowly loses sight of goals and ambitions, thinking that one will never be good enough to succeed.

One may stop doing homework and just brood, viewing life in a very negative light. One may feel disillusioned and want to escape reality in ways that are not always very healthy. One may become socially withdrawn and develop fear of interaction. One becomes too scared to get hurt again if one opens oneself up to people.

Bullying causes damage to a person’s view of life and of one’s self. It lets us see how fragile and delicate we truly are.

Bullying must stop. This will happen only when people hold their tongue, be friendlier, become role models, and set up a good home environment. People need to learn and practice empathy, so that one day, there will be less broken people in this world.