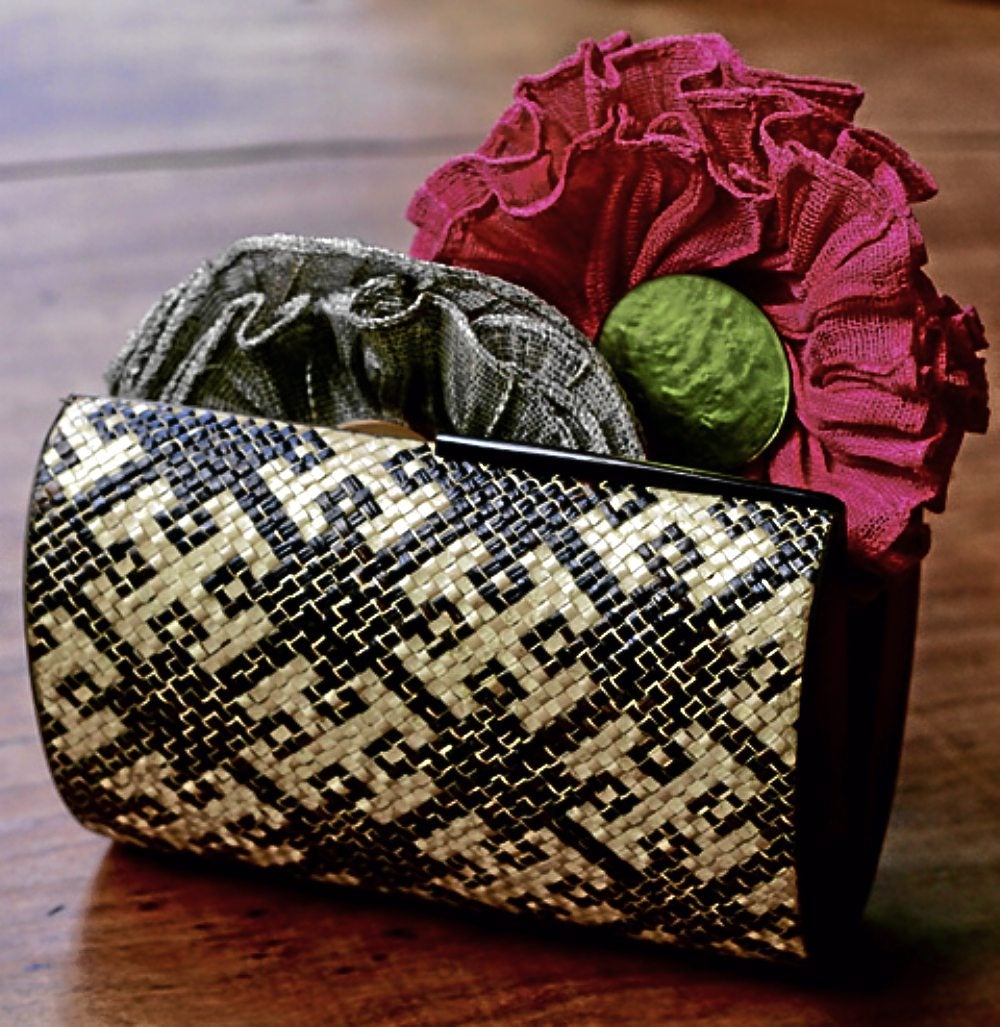 Once used to make common products such as slippers and ropes, the abaca is repurposed into a luxury eco textile.

A pioneer in the local eco-fashion movement, designer Fernandina “Dita” Sandico Ong sustainably produced her signature fabric from the exotic plant musa textilis. She christened it “banaca,” because abaca belongs to the banana family called Musaceae.

“I’m leveling up the look by adding more embellishments and coming up with bigger wraps,” she says. Sandico Ong is underscoring her forte as the “Wrap Artiste.”

In the shoot with Anna-Maria Heidorn, the spouse of the German ambassador, Sandico Ong shows how her garments could be twisted, scrunched and rolled into bulbs, rosettes, petals, scallops, cabbages, butterfly wings and other interesting shapes. The shirred and gartered capes can be worn like a column, puffed like an onion bulb or fluffed like a tutu.

“That’s our new story. We’ve come a long way,” says Sandico Ong, who redefined contemporary Filipiniana. Unfussy and low-maintenance, the wraps are designed for the busy career woman who wants to wear local without looking too traditional.

After graduating from Tobe-Coburn in New York, Sandico Ong worked as a fashion merchandiser for the now-defunct, family-owned C.O.D. Department Store. Meanwhile, she also started producing her line of clothing using inabel from Ilocos Sur. These native handwoven cotton fabrics were used for bed sheets and towels.

She gave the inabel a new fashion spin. She also developed other fibers such as piñalino or pineapple fibers blended with Irish linen.

“A few years back, I realized I wanted to focus on the local. We were doing linens and cottons which had to be imported. The supply for pineapple fibers was limited. On the other hand, abaca is abundant. We’re one of the top three producers of abaca in the world,” she says.

She credits weavers Elisa Reyes for showing her the possibilities of abaca.

Another weaver and entrepreneur, Virgilio Apanti, showed her samples of abaca fabrics produced by Tupas ng Baras Multipurpose Cooperative in Baras, Cantanduanes. Unlike the rough abaca used for ropes and slippers, the artisanal abaca exudes a sheen and softness. It is stiff enough to hold unique forms, yet pliable  to follow the movements of the body.

Since 1995, the designer has been working with this cooperative. “I wanted to help them. So we started from scratch. I didn’t know how the plant looked like. We stripped off the trunk to get the yarns, knotted them from end to end, bleached and dried them. Although it is very labor-intensive, this is how we keep the tradition.”

The weavers were trained in natural dye extraction and advanced weaving techniques for abaca.

“Instead of migrating to Manila to work as domestic helpers, we’re giving them jobs. Even the out-of-school youths learn this craft. This will encourage them to stay. That’s the social entrepreneurship aspect.”

Sandico Ong admits she had to establish a rapport with the abaca. “I couldn’t cut it like most fabrics. The fall wasn’t the same,” she recalls. “I had to think out of the box. I commanded, ‘Perform! Do what you want.’ I asked for divine help. With His guidance, the design just flowed. I shaped and reshaped, wound it around, according to how it draped the body. I never went against it.”

In keeping with the spirit of eco-friendliness, she recycled the scraps by making them into visors, tiny scarves and pouches. When she wears her uniform of a linen tank top, dark slacks and thongs made of banaca and mother-of-pearl, she coils a scarf around her neck or covers her shoulders with these easy-wearing scarves.

Sandico Ong’s clients include ABS-CBN president Charo Santos Concio, actress Chin Chin Gutierrez, the Friends of the Cultural Concerns of the Philippines, and the diplomatic corps.

One of her patrons is Madame Heidorn, who googled the designer after receiving a banaca purse as gift.

Her wraps are sold in major department stores such as Takashimaya in Japan, the Banyan Tree resorts in Thailand, and high-end shops in Singapore.

She recently went on a tour to promote her fabrics and wraps in Amsterdam, Paris, Berlin, Abu Dhabi and Dubai, sponsored by the Philippine embassies and on a grant from the National Commission on Culture and the Arts.

The collection included her Mariposa line, which consisted of the modified wraparound panuelo; the Mori, the long banaca tunic with slitted armholes; Mira, which is distinguished for its pleated fabric. Mira Nila is cut on a bias and worn like a bolero or jacket.

“This is the way to go in the international market. Banaca is easy to maintain. You can travel with it and it will stay in shape. And it’s unique to the Philippines,” she says.

To the designer, the banaca is a metaphor of the Filipino. “It’s resilient. Our people have been through a lot but they bounce back.” Just like the banaca, it will always retain its original shape after all the manipulating.

Ultimately, Sandico Ong debunks the perception that the fashion world is all about appearances: “It’s about working with materials that can sustain the environment and communities.”