She gave up a career for love | Inquirer Lifestyle ❮ ❯ 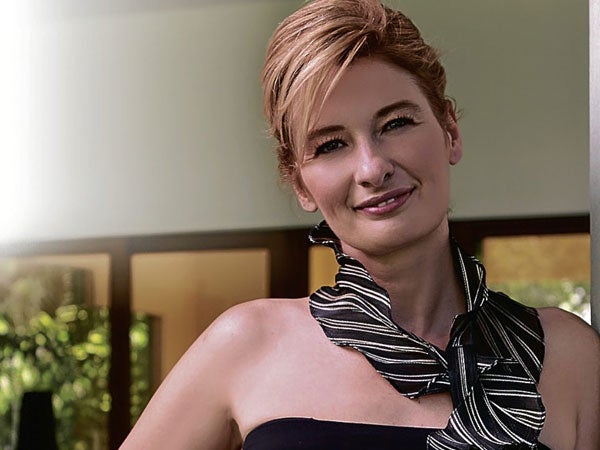 She gave up a career for love

German Ambassador Joachim Heidorn is one of the best dressed envoys in town. He and his wife, Anna-Maria Werner, she with the doll-like features, make a handsome pair.

In diplomatic circles, Anna-Maria, who is half-Bulgarian, is known to be an intellectual like her husband. Although her foreign service career was put on hold in favor of marriage, she never left her ambitions. She aimed high from the start of her career.

“When I joined the Bulgarian foreign service…I wanted to prove to myself that I could build a career as a female diplomat. For the climax of my career, I would aspire to be a good ambassador for my country,” she says.

A career highlight was when she was with the team that negotiated Bulgaria’s accession to the European Union.

From Sofia, Bulgaria, she was sent to the German Ministry of Foreign Affairs on a diplomatic exchange program between the two ministries.

“Although Germany and Bulgaria are very different in history, both are Christian European countries sharing the same values and ideas. I feel equally at home in both countries,” she says.

Meanwhile, Heidorn was working as a civil servant in the foreign ministry. One day, he approached her and introduced himself.

After an interesting conversation, he invited her for a glass of wine. Their first date was a romantic ice-skating venture.

After a courtship of nearly two years, Heidorn was made ambassador to Amman, Jordan.

“He asked if he wanted us to be together,” she recalls.

However, Anna-Maria was the deputy counselor at the Bulgarian Embassy, a position that was next to the ambassador. For a married couple with diplomatic careers, the conflict of posting would be a challenge.

“I had to decide if I would come with him. I chose to be a spouse, not a working diplomat,” she says.

Still, Heidorn understood her career goal. They made a deal. She’d learn from him. Likewise, he vowed that upon retirement, he wouldn’t mind just being a diplomatic spouse.

The Philippines is their second posting, albeit a refreshing one. Upon arriving in Manila, the warm smiles of the Filipinos melted her heart.

In the old days, the diplomatic spouse was considered a member of a diplomatic team. Her performance was assessed and incorporated in her husband’s career profile.

Although the spouses today no longer carry out diplomatic tasks, they are nonetheless expected to run the embassy household, entertain and be supportive of the ambassador.

“I enjoy the conferences, diplomatic events, workshops and social functions. I work closely with my husband,” says Anna-Maria. “I enjoy our trips to the beautiful islands every time.”

During off-hours, she takes her daughter Joanna, 5, to ballet class or visits the islands.

The Heidorns also enjoy dining at the Harbor View Restaurant along Roxas Boulevard where they enjoy the sunset at Manila Bay.

She is also working on her doctorate in megacities. During her free time, she joins activities of the Spouses of Head of Mission. Anna-Maria sees the stark contrast between the comfortable enclaves in Makati and the underprivileged communities. She is impressed with the Filipino resilience.

“They go through difficult situations and work for little money. Yet, they smile and they greet you every time. It’s only in the Philippines.”