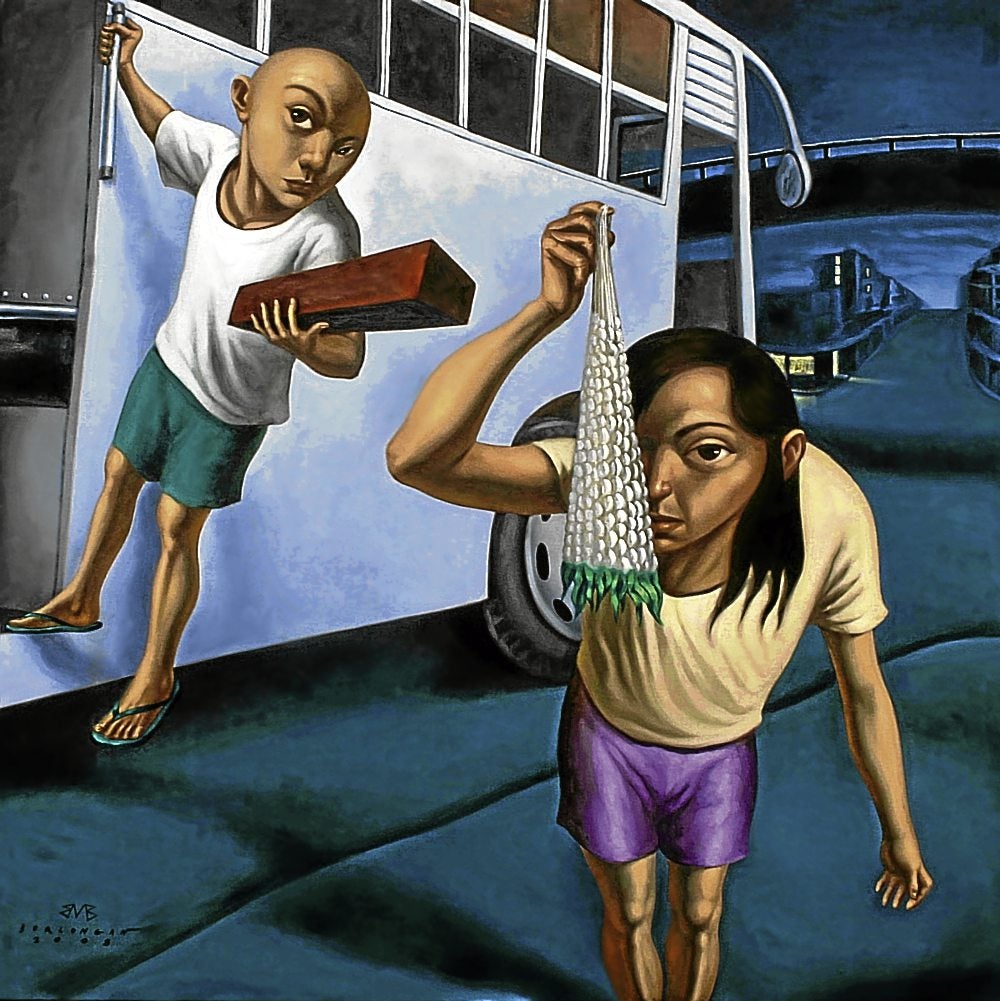 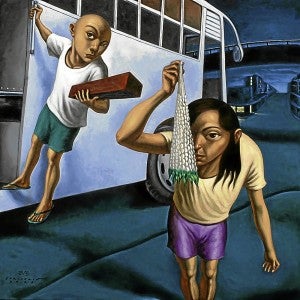 Against the darkly stark wide road where a bus runs, two young vendors are ready with their wares.

Though spare, the image is replete with elements that define the city. It’s either dusk or daybreak. A young girl dangles from one hand garlands of sampaguita with ilang-ilang, and the boy hanging off the bus’ handle bars clutches a box that, anyone who plies Manila streets knows, contains cigarettes and candies. He is known as a “takatak” boy, referring to the sound he makes by moving the box’s sliding cover to call the attention of pedestrians, motorists and commuters.

Both constitute a haunting summary of Manila realities that stare everyone in the face every day, whether they are noticed or not.

Borlongan says “Batang Edsa” is his visual transciption of music man Dong Abay’s “God Bless Our Trip,” which calls out to caution these young peddlers while they weave through traffic. It is the same concern that spurred the creation of the painting.

Borlongan is known to render everyday occurrences. Scenes he regularly sees often make their way onto canvases, and they are paeans to existence.

“Batang Edsa” is one such narrative of simple truths. His somewhat minimalist depiction is a social-weather forecast: Poverty is the dark sky that necessitates the labor of children selling on the busy avenue, but there is light at the end of the tunnel (or road in this case) as dawn breaks in the horizon.

That the throes of struggle are hardly evident has been constantly captured by the artist. His subjects are the characters that make Manila most memorable, those faces and figures that live the daily grind but still look to a brighter day.

Borlongan’s works are not colored by agenda. They shine simply by showing what is.

“Batang Edsa” does not spill over the canvas’ edges but gets the message through. Understated but clearly understood.

ManilArt 2011 is presented by the Bonafide Art Galleries Organization (Bago) and the National Commission for Culture and the Arts (NCCA) with the support of Midas Hotel.