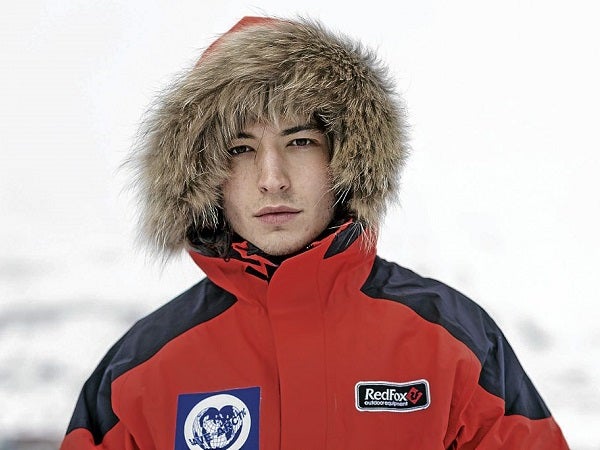 ACTOR Ezra Miller is one of the four young ambassadors trekking to the North Pole.

It is late as we write this. We’ve been on standby for a call from somewhere close to the North Pole.

No, the call won’t be coming from Santa Claus, but rather from Ezra Miller. Yes, Ezra Miller, who brought chills down our spines when he played Tilda Swinton’s crazy son in “We Need To Talk About Kevin.” Miller is most remembered for recently playing the brilliant and tender-hearted Patrick in “The Perks of Being a Wallflower.”

The phone rings and we hear a cheerful voice say, “Hi! This is Ezra Miller calling from the negative 39th degree Celsius near the North Pole. Can you hear me?”

His voice, despite coming from a satellite phone somewhere in the Arctic, is surprisingly clear, save for the constant whooshing of the wind in the background. We tell him we can hear him and he chuckles. “This is kinda miraculous. I’ve never done this before. My mind is kinda blown!” he says.

Miller is not trekking to the geographic North Pole for fun, nor is he there researching for a role. He’s there as one of Greenpeace’s ambassadors to raise awareness of issues in the Arctic, and to have it declared a global sanctuary.

He is joined by other young activists from different parts of the globe who want to raise awareness for personal reasons. Renny Bijoux, one of the other ambassadors, is from Seychelles, an island in danger of being submerged from rising sea levels.

The group intends to release a time capsule containing millions of signatures from people who have joined its cause. “We want to tell a story through a symbolic action,” says Miller.

Activism is not new to Miller. He was inspired by his sister, also an activist. “When I was 11 years old, I’d watch my sisters engage in acts of activism. My sister Saiya was in Miami for a protest and I was excited living through her vicariously. I’ve always looked up to my sisters.” he says.

After religiously following reports about the protest his sister was involved in, he would later read a report about how policemen started attacking the protesters, and this would spark a realization in Miller. “The people were attempting to express themselves but were easily quelled by violence. It was a wake-up call that I’m still answering,” he adds.

For Miller, whose job as an actor is to interpret stories of people, activism is another way for him to relate to the world: “Less than a year ago I met a wonderful human being named Sol Guy and we started talking about many things, most notably globalization, corporate domination and how human beings could affect change in meaningful ways.

“We started talking about the idea of storytelling—the idea that human beings quintessentially tell stories—pictures, works of art; we also tell big stories with how we act and how we proceed,” he says.

Their successful collaboration on creating a documentary detailing the struggles of indigenous people in the Dakotas to reclaim their land whetted their appetite for more.

“At that time, we agreed to make more new and original stories because a small measure of success can create a ripple of possibility,” explains Miller.

Of the story they are trying to tell about the Arctic, Miller says: “Right now we are telling a pretty horrendous story. If it was a movie it would be a terrible disaster movie.”

Before agreeing to the Arctic trip, Miller had doubts. “It sounded very terrifying. I didn’t want to get eaten by a polar bear or freeze my fingers off. I value my fingers. But now here I am, in a tent, melting snow just to be able to drink a bit of water. And I’ll tell you it’s really well worth it.

“When I look at this place, it is an absolutely essential part of this planet.” he says. His fans will be glad to know that they haven’t come across any people-hungry polar bears yet.

Naked in the cold

One has to wonder how Miller got in shape in time for the arduous trek, since he only had a month and a half to prepare. “First time in my entire life, I’m ashamed to say, that I started to exercise every day. Mostly yoga, some cardio in a gym, a little bit of running on beaches while dragging tires.

“I went up to northern Canada—three hours north of Montreal—for skiing and camping training; that was really the bulk of physical preparation. I also entered a funny mind state; instead of complaining about being cold, I’d take off all my clothing and stand naked to try to give my body understanding of how it is to be cold, which made me look crazy, standing in New York in my boxers and T-shirt,” he says.

Miller adds, though, “Crazy is not an image I’m too desperate to avoid clearly, seeing where I am now!”

While he was briefed on what to expect, nothing quite prepared him for the reality of being in the Arctic. “It’s far more beautiful than I could’ve imagined or fathomed. It’s impossible to describe, even with all the video documentation we’re doing; it would be impossible to communicate how gorgeous this place is. That it took millions of millions of years to form frozen oceans at each pole of its axis which regulate the entire climate system of the globe is so hard to contemplate.

“But you get up here and for some strange reason it makes perfect sense. This is how it has to be. The reality that three-fourths of it have disappeared due to human-made climate change is unbelievably horrifying, especially from where I’m sitting right now,” he says.

“That oil and gas companies wish to take advantage of the melted waters to further drill oil, to me, is disgusting. Irrational. Any human being would be unable to see any advantage in it unless they were driven by profit. Oil and gas extraction will make money only for a small number of people. I didn’t expect to be so emotionally moved by this place. Humanity has destroyed so much but there’s still a pristine corner, sparkling white and to see that and to just think about a possible oil spill here sends shivers up my spine,” adds Miller.

He mentions how he needed to melt snow first in order to drink water, so we ask him about the food situation. “We’re actually making some food now, we have these very, very disgusting bags of freeze-dried food that they give fancy titles to, like chicken curry or beef stew, even if all they are processed freeze-dried stuff.

“We melt a lot of snow, and then you pour melted water into a bag of freeze-dried food and shake it around and you attempt to eat it without vomiting. I must confess that there is nothing I’m thinking more about these days than fresh food. I’m constantly in food fantasy land,” he confesses.

We ask him what he wants to eat the moment he goes back to the city, and his voice takes on a longing quality. “I want a plate of vegetables, delicious vegetables and some sort of delicious piece of meat—a rare steak with some sort of creamy black pepper sauce—what a cruel question!” he exclaims.

Though we are capable of reducing our carbon footprint as individuals, Miller says that big corporations need to overhaul their practices for real change to happen. “When we get back, we will immediately edit footage in the hope that we can show this in May, so that the public can be made aware about the situation.

“Oil and gas extraction shouldn’t be allowed in the Arctic. We need to make sure it doesn’t happen. Mass movement needs to happen to hold corporate leaders accountable for the destruction,” he points out.

The group is barely halfway through its journey. As it heads to the geographic North Pole, Miller explains that for every 10 kilometers of skiing, a movement in the ice can move him down nine kilometers back, making progress slow and unpredictable.

Still, Miller’s Hollywood calendar back at home is already booked.

“No breaks for the weary. I’m set to head to the studio with my band (Sons Of An Illustrious Father) to record an album and then we go on tour around the United States. There are a couple of films I’m excited to be in towards the end of summer to the end of fall, and other creative adventures. It will go on and on until the day I die,” he says.

We ask him if there is a particular role he’s been dying to play. “I want to be able to play as wide a variety as I am humanly capable,” he says. Indeed, in real life, and only in his 20s, Miller has taken on many roles—musician, actor, activist, and now, the Arctic’s champion.

As we end the call, Miller makes one last request: “Enjoy the gradient of warmth on your part of the world and please send it my way. And maybe send some delicious food by carrier pigeon, too.”

Visit www.savethearctic.org to find out more about the campaign.