The playing’s the thing–Fred Lo and his dream toy collection | Lifestyle.INQ ❮ ❯ 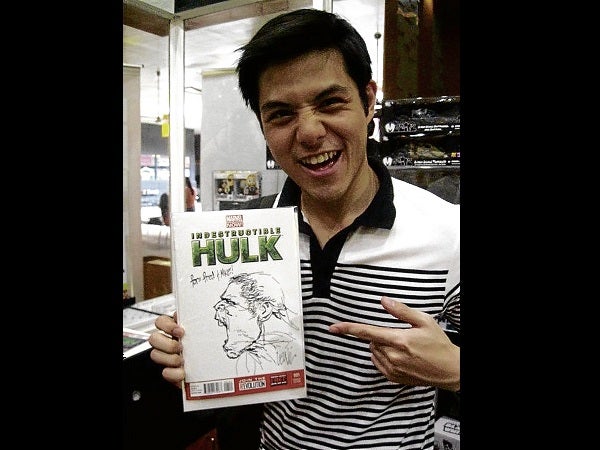 THE ACTOR-FANBOY. “I think it’s the child in me that really makesme appreciate them.”

With his good looks and talent, young theater actor Fred Lo could easily go the predictable road: charm his way to the top of the corporate ladder, say, while collecting girlfriends, gadgets and cars.

Instead, the male lead of the new Pinoy rock musical “Sa Wakas”—ongoing until April 28 at Peta Theater Center—has Batman, Superman, Power Rangers figures, name it, filling up his room.

“I’ve always wanted to collect toys as a kid,” he says. “But it was always too expensive a hobby to start, especially with tuition and everything. So, when I graduated and earned some money from all the shows and gigs I did while in college and after, I realized I had some cash to spare and started investing in the collections I wanted.”

He started collecting in 2011—a few months after he graduated from De La Salle University with a Communications degree—with some Power Rangers figures, being a huge fan of the cartoon series. He then moved on to Pokemon, Final Fantasy and characters from Marvel and DC comics.

He says he can’t even count them now; he estimates some 1,000 toys or more.

“Right now they’re in their boxes in my closet because there’s no space to display them. But I plan to make room for them sometime soon. I’ve already bought display cases for them,” he says. 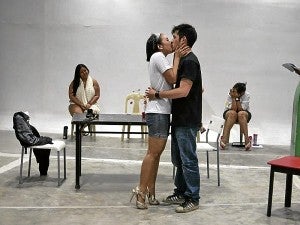 Why the fascination with “kids’ stuff?”

“I think it’s the child in me that really makes me appreciate them,” he says. “I’m the type of collector who really likes to play with toys and not just keep them on display. That’s why, apart from wanting good quality toys that are really detailed and realistic, I also want them to be fully articulated and durable so I can play with them.”

Such child-like fascination and penchant for play are surely an asset when it comes to his day job as a full-time theater actor-performer.

But there’s another side of him that made him perfect for the role in “Sa Wakas,” which weaves together the hits of the defunct rock band Sugarfree.

Like any other teenager who grew up listening to the band’s music, Lo confessed he once dreamt of fronting a rock group.

“Sugarfree is one of the bands that I really liked listening to when I first discovered the band scene. I love their lyrics and what they sing about,” he recalls.

Among other local rock acts in the last decade which wrote and performed their own songs, Sugarfree is best remembered for the lullaby “Tulog Na”; the ballads “Mariposa” and “‘Wag Ka Nang Umiyak”; and the anthem “Hari ng Sablay,” among others.

“I wanted to be a rock star when I was a kid,” he says. “As I grew older, my priorities changed and I found other dreams to pursue. But I wouldn’t mind if fate dictated that I should become one.”

Formed in 1999 and four albums later, the three-member Sugarfree called it quits in the middle of 2011 when vocalist-composer-band leader Ebe Dancel decided to embark on a solo career.

“I was so star-struck the first time I was in a room with Ebe,” Lo recounts. “I was the last person he met from the cast, so all my cast mates were telling me all about him and how he was looking forward to finally meeting everyone. When I finally met him, I was too nervous to even speak, but he was so down-to-earth and so nice that it was hard not to get along with him.”

Sugarfree’s first album, “Sa Wakas,” was launched in 2003. Ten years later, it has become the title of the tribute musical Lo is starring in. 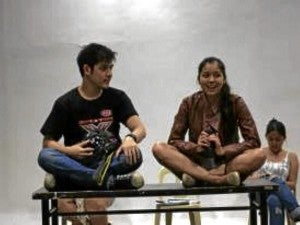 Co-written by Andrei Nikolai Pamintuan and Mariane Abuan with musical arrangement by Ejay Yatco, “Sa Wakas” is described in part as “a bittersweet love story that chronicles the end of one relationship and the beginning of another…”

There are three characters; The male lead Topper, and two females, Gabbi and Lexi.

Playing Topper didn’t land on Lo’s lap. He was asked to audition by a friend who is part of the production team. It was “a grueling audition process,” he says, before the role was offered to him.

“It’s a lot of pressure playing the lead in this show. The story is pretty intense and the songs are really high since they’re from Sugarfree, so it’s really exhausting and every rehearsal takes a lot out of me,” Lo says.

But the show has also pushed him further “to a point where even I am surprised at myself with the things that I never thought I’d be able to do. I feel that I’ve leveled up both as an actor and a singer.”

Other cast members are Caisa Borromeo and Laura Cabochan alternating as Lexi; and Kyla Rivera and Justine Peña as Gabbi.

Lo has been singing since he was in prep school.

“But I realized I liked acting when I was in high school. I got into some school and church plays and I had so much fun I stuck with it,” he says.

As a theater actor, his first attempt was in a church play about the Bible story of Jonah.

“I also joined our church theater group and did a few shows of a play called ‘Friends 4ever’ and even did a provincial tour of it,” he recalls.

But the play that really made him think of entering the professional theater world was Stages’ production of “Footloose,” which he saw in 2005.

It was a eureka moment for him. “I think I have what it takes to be part of something like that, I said to myself then.”

After high school, he concentrated on his college studies for a while but finally made time to try a summer workshop at Trumpets Playshop.

He auditioned for his first professional theater show, Trumpets’ 2009 hit “N.O.A.H. (No Ordinary Aquatic Habitat).” He was originally cast as a chorus member but was later given the role of “God/narrator,” alternating with Sam Concepcion. The following year, he got the breakthrough role of Mark Cohen in 9 Works Theatrical’s staging of “Rent.”

He’s also played one of the leads in Spotlight Artists Centre’s “Magsimula Ka!”; Rolf in Resorts World Manila’s “The Sound of Music”; and, most recently, the conflicted student Quito in the rerun of 4th Wall Theater Company’s “Rivalry: Ateneo-La Salle, The Musical.”

“Right now I’m just enjoying my time performing for a living,” says Lo. “But the plan is to look for something (more) stable someday. Hopefully still something related to performing or related to… toys.”