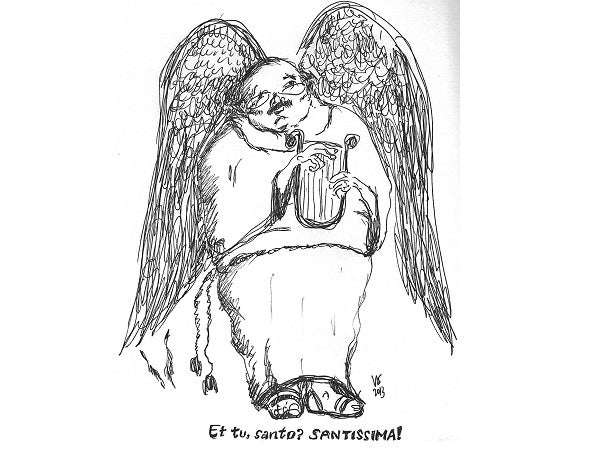 As young as 70, he had made it clear to me, his first child, that dying was not in his plans, but that he might be open to the idea by his 80th, the age his brother Tuting, older than him by four years, would himself go.

But again, upon turning 80 in 1998, reconditioned with a pacemaker, maintained by medication, and allowed to eat anything, he set his sights on the millennium.

It was he I was watching when, unexpectedly in 2007, my diabetic Mom, four years younger, died in her sleep. He had himself been weakened, slowed, by mini-strokes, so mini they had been detected only after the fact, such that it became risky to take him places—he was quite happy to stay home all the same, philosophizing, “Aging is definitely a better alternative to dying.”

I was in Madrid, in late October 2009, just a month after his 91st, when his second family called to tell me he had had a stroke.

Vergel, my husband, found him in the Emergency Room but not looking like an emergency case at all: an arm under his head, legs crossed in his habitual, relaxed way—one leg pulled up just so, to prop the other that crossed it (naka-de-cuatro)—and making some talk.

“Looks like he’ll make it,” Vergel reported to me.

Arriving the week after, I found him under intensive care, hardly communicative, though still responsive. I regaled him with stories about my trip with cousins, and how good paella was served from its native kitchen—we had it everyday in Spain. Before leaving I asked him if he wanted anything for me to bring back tomorrow. He signaled me to lean forward and whispered, “Paella.”

Signs, medical and otherwise, had me believing he’d be able to pull it off again. The third in a brood of nine, all boys, he had broken the natural sequence of departing—number-six brother, Chito, went in 2006.

After two months, Dad was moved to a regular room and, soon enough, brought home—

another home—to one of his ladies-in-waiting. One by one, as he got better, his life supports were removed—IV, oxygen, urinary catheter. There remained only the feeding tube.

He wasn’t on any special diet, either. Household food, familiar to his system, so long as liquefied, is preferred, says his doctor. With two families—ours and theirs—continuing to share the expense, which now accounted for two nurses and two caregivers on rotation, Dad was no burden at all.

Five months later, a visiting American-trained doctor, the brother of Dad’s second lady’s, called to ask me to consider letting Dad go. It was not an option at all, so I rushed to Dad anxiously, only to find his feeding tube already removed.

My knees weakened, and as I dropped in the chair beside Dad the same voice on the phone, now delivered in person, began to berate me: “How selfish you are. Don’t you realize your father is suffering?”

I had no reply to what seemed to me a self-serving question itself.

Dad’s color had begun to change—death throes were about to set in. Rising, I planted a kiss on Dad’s forehead and got out of there.

Once home, I called his real doctor. He was himself disgusted. Dad, in his condition at his age, might be going, but not just yet, the doctor told me. His body should be allowed to shut down in its own time, he said.

I asked if I could bring him home; he was skeptical—putting the feeding tube back must be done in a hospital, and transporting him by ambulance after hours without nourishment could prove fatal.

Dad fought his last fight on his own, as he did all his previous others, hanging on until he had used up his last ounce of life force.

It was so much like Dad, who’d squeeze the last drop of gas before refilling. It used to drive Mom crazy. He’d turn his head around from the wheel to say to me, standing behind the front seats, anxious myself, “Look, kiddo, I’m running on fumes!”

This time Dad ran on fumes with absolutely no chance at refilling.

For a while I thought I might have somehow let him down. But low feelings eventually gave way to bright memories of my extraordinary life with him—like his last confession.

He was in his mid-80s when I managed to talk him into going to confession. I had arranged it with a priest friend and warned him about the character he was meeting—a lovable rascal, people like to describe him, and I’m not one to disagree, except to say that he never intended to hurt people and he took care of everybody as best he could.

It would be just too much, I told the confessor, to demand in his case contrition and atonement of the sort that the Church normally insists on—unless there was a way to unscramble eggs.

My priest seemed to understand; he told me not to worry and to leave everything to him. He invited Dad into a private room and waved me away. I waited outside. In less than an hour only Dad emerged.

“I had to cut it short, kiddo. Your friend was enjoying my confession too much,” he said, with the usual impish twinkle in his eyes.

“What about your penance?”

He kissed my hand chivalrously and replied, “Relax, kiddo. I think I’ve prayed enough rosaries at the Ateneo and done my share of First Friday and First Saturday novenas, too.”

The next time we heard Mass, he nudged me at Communion, “Let’s go.”

I shook my head.

“What’s the matter, you don’t believe in it?”

“Dad, it’s precisely because I do that I don’t go.”

The Eucharist is closed to people lacking a Church annulment and a wedding.

When I saw him again, the confessor told me, “Don’t worry; your dad is okay.”

Apparently, he, too, had been won over. He smiled, explaining to me what the gaming idiom “forced to good” means in priestly terms: “Who knows, maybe, in His great love and mercy, God allows certain individuals to qualify for heaven by letting them live long enough so they could no longer sin even if they wanted to.”