‘Don’t stop ’til you get enough’ | Inquirer Lifestyle ❮ ❯ 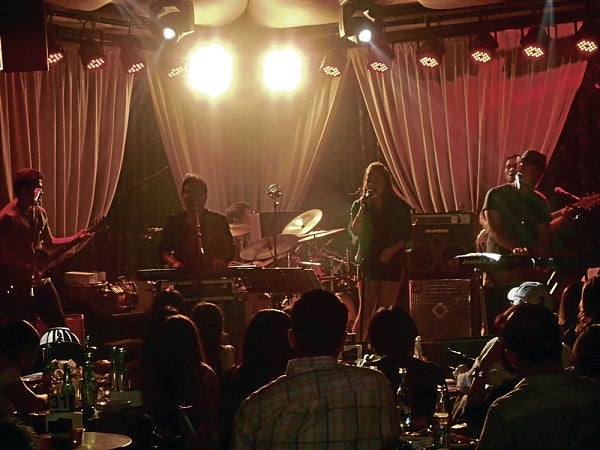 THE BAND Freestyle performs a selection of pop-rock covers and originals every Wednesday at 19 East in Sucat, Parañaque. PHOTO BY POCHOLOCONCEPCION

‘Don’t stop ’til you get enough’

It’s always exciting to go to 19 East, the club named after its address at Kilometer 19, East Service Road in Sucat, Parañaque. It’s not really that far in case you don’t reside in BF Homes or its neighboring areas in Bicutan or Alabang.

Coming from Makati, take the South Luzon Expressway, pay P84 at the Sucat toll exit, make a U-turn to the East Service Road on your left, and look for the 19 East sign on your right. (Drive slowly because the sign, which is about 100 meters from the Sucat toll exit, is not that visible.)

Why is the club worth our time?

1. The ambiance: It’s like going to Antipolo or Tagaytay because there is a cool breeze that blows on our face as we walk toward the entrance. The club sits on a spacious property on a hill that overlooks Laguna de Bay. One can actually enjoy the al fresco scene with a drink or two. There is a bar with a billiards table near the main club.

2. The artists: We’ve been here only three times in the past, and in all those occasions we thoroughly enjoyed the performances of such top-rate acts as Cynthia Alexander, Jay Durias and Chad Borja.

We caught Alexander’s show, which had a full-house audience, a few years before she flew to the United States where she’s currently based.

Durias’ birthday gig last year was likewise a hit, attended by fans, colleagues and family members including his wife Helene Inductivo and children Kahlil and JD, and all the Inductivo siblings.

Borja’s performance was a revelation, his vocals in fine shape after undergoing surgery a few years ago.

This time, we’re here to watch Freestyle—the pop-rock group from Davao known for the original songs “Before I Let You Go” and “So Slow,” aside from its longtime reputation as a party band with a wide repertoire of classic covers.

The band’s founder, guitarist Tat Suzara, is still onboard, along with keyboardist Joshua Desiderio, and new members Rommel dela Cruz (bass), Mike Luis (vocals, second keyboards) and Ava Santos (vocals). Gerald Banzon (drums) can’t make it because his wife just gave birth, so Alden Abaca (who plays with Barbie Almalbis) is sitting in for him tonight.

The band is about to play its second set when we arrive. The audience is treated to a selection of pop ballads rendered close to their original versions, which is fine since the performers are not really clones, but rather authentic talents who just want to have a good time.

Santos and Desiderio’s duet on “Suddenly” is sweet as honey, while Luis’ interpretation of “I Just Can’t Stop Loving You” reveals his deep admiration of Michael Jackson.

Luis also does a neat cover of “Changes in My Life,” earnest emotions tumbling out of his childlike voice.

It’s good to hear “So Slow” again, not on radio but live onstage, with a new singer like Santos. She follows it up with “Kung Ako Na Lang Sana”—a showcase for her powerful pipes. The absence of Freestyle’s original female lead singer Jinky Vidal, who left the band recently, is hardly felt because Santos seems fully capable of filling in Vidal’s shoes.

Dela Cruz, meanwhile, enhances up the spaces between the lyrics with bass lines that sing on their own. The deep tones that glide with grace and precision lift our spirits further, persuading us that switching from San Mig Light to red wine would be fine.

The tempo picks up on the latter half of this set, Luis and Santos sharing vocals on “Payphone,” after which Santos sings “Firework.” At that moment, we start thinking that Freestyle can play anything.

When Luis proceeds to do the vocals on “Moves Like Jagger,” we are surprised that he has an Auto-Tune device plugged in. Is he doing it to show off, or to make sure his pitch does not fail him, or simply to enjoy the techno effects? In any case, we decide to stand up and dance while filling our glass with more wine.

The next number, “Locked Out of Heaven,” totally frees our inhibitions. The band’s rendition of this new Bruno Mars hit is close to superb, goading us to sing along with the “Oh yeah-yeahs” and “Ughhs” with fervor.

And then Luis is given the floor to indulge on a Michael Jackson medley: “Billie Jean,” “Don’t Stop ’Til You Get Enough” and “Beat It”—with Suzara unloading an awesome approximation of Eddie Van Halen’s trademark solos that leave us raving.

The band members join our table and 19 East owner Wowee Posadas arrives, fresh from his own set with the band Manila Blues Experience at Mandarin Oriental Hotel’s Martinis Bar.

Posadas orders more wine as the conversation rambles on to nothing else but music. Suzara has good news: the band is due to record a new batch of originals. Santos, it turns out, is only 22 years old and very much open to ideas on how she can further develop her skills. We all get a kick listening to Bee Gees and Andy Gibbs tunes on CD courtesy of Luis, who keeps going back and forth to the audio technician after every request by Posadas for more Gibbs brothers hits.

When we glance at the clock, it’s past 4 a.m. Time flies, and our head is floating after having a full dose of good music with great company.