Llita Logarta: Valuable things do come in small packages –but she was really a giant! | Inquirer Lifestyle ❮ ❯ 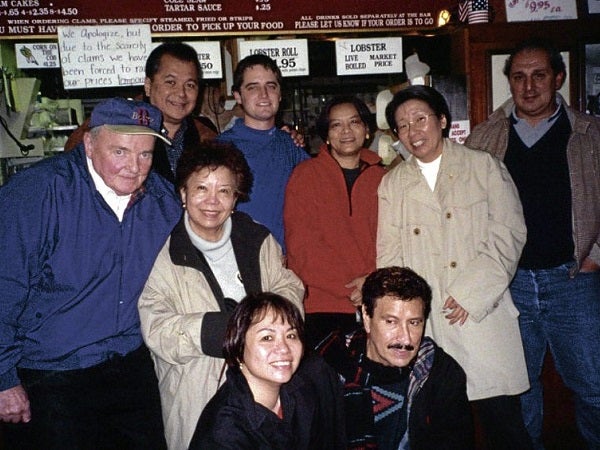 Llita Logarta: Valuable things do come in small packages –but she was really a giant!

I had been reading the name “Lita Logarta” way before I finally got the privilege of meeting her in person, and by the time time that meeting took place, she had already added the extra “L” to her first name.

It was a pre-departure lunch briefing which I, as then general manager of Northwest Airlines GSA, hosted for a handful of press VIPs traveling with me to the USA on a familiarization tour. With her gentle and amiable demeanor, I immediately “connected” with Llita when I met her that day. When asked what made her decide to insert the extra “L” in her first name, she told me it was for good luck.

There was a certain tenderness about Llita, something akin to motherly care, and I valued that very much. In fact, that could have been why she was always on my list every time my airline sponsored a fam tour.

I remember having invited her to quite a number. It was not only because she was Inquirer’s Lifestyle editor and would always put out multi-spread articles on the airline and its featured destinations upon our return, but I really enjoyed being with her on those trips, especially because she spoke Cebuano, too.

I also saw my own mother in her, in the way she would do little things for me and the rest of the group, like seeing to it that we would always have something to munch while in the tour bus, or at the airport while waiting for our flights. Little acts of kindness defined her personality.

Another reason I enjoyed tagging Llita along in my fam tours was her passion for shopping. I had fun watching her buy all sorts of things, even if it posed excess baggage problems on our return flight. She was a “blackbelter” in shopping. She would never get tired of going through all the souvenir and curio shops and boutiques everywhere we went. I had the feeling she came along on those trips just to shop!

I remember she would often disappear from our group while the tour guide was busy enumerating the interesting facts about a certain tourist attraction. As the group’s official escort, I had to see to it that the group was always complete throughout the entire tour. You can imagine the delays we had, as all of us had to look for Llita because I refused to let the group move on to another area unless everybody was accounted for.

We would finally find her, bogged down by heavy packages and bags, and with nary a hint of an apology, she would merrily show the rest of us the bargains she got for herself, her children, her staff, and the apple of her eye, her adopted little boy. I guess being everybody’s “mother figure” had its benefits—no apologies were expected from her, and neither did anybody begrudge her for the delays caused by her disappearing acts!

Aside from the ever-present smell of expensive perfume on her, Llita was a veritable fashion plate. She would always look elegant in her travel suits with matching accessories—perfect for business-class travel. When I brought a press group to Broadway to watch one of the early shows of Lea Salonga in “Miss Saigon,” followed by dinner I hosted at the popular Sardi’s, I remember that Llita, as expected, was dressed to the nines. But, unfortunately, she had to bear the walk to the restaurant four blocks away from the theater, in her heels, on a chilly autumn evening.

But, my favorite recollection of dear Llita was when I brought the press, in 1992, to the opening of the humongous Mall of America in Minnesota, where the headquarters of the defunct Northwest Airlines was.

We were billeted at a hotel in Bloomington near the mall, about 30 minutes away from Minneapolis. Since we started the day early going around the many attractions of the twin cities of Minneapolis and St. Paul, I made sure the tour guide would bring us back to our hotel not later than 5 p.m., to give everyone enough time to rest and be ready for the 7 p.m. dinner hosted by our airlines’ officers.

I was really looking forward to a nice nap before the formal dinner, to help me overcome jetlag. But, just when I was getting settled in bed in my pajamas, Llita called to tell me she probably left her new scarf in the tour bus, and wanted to know for sure if it was there.

I called up the bus company and, after some time, was told they had her scarf. I happily reported to Llita and told her not to worry because the tour guide would give it back to her the following day since we would be using the same bus. I thought that would settle it and I could finally get my much-needed nap. Alas and alack, Llita said she was planning to use the scarf for our dinner that evening.

Although she didn’t tell me outright that she wanted me to go and get it, I could sense a tinge of disappointment in her voice, so I told her, “I’ll see what I can do.”

Letting go of my craving for sleep, I dressed up, took a taxi to the bus depot in downtown Minneapolis 30 minutes away, retrieved Llita’s scarf, traveled another 30 minutes back to the hotel, and delivered it to her room. Of course, she was profuse with gratitude.

As I left her room, although deprived of my nap, I felt good having made my “mother figure” really happy. I barely had time for a shower before I joined everybody else who had already assembled at the hotel lobby for our transfer to the dinner venue.

Imagine my shock when I saw Llita using a different scarf as accent to her dinner outfit! I asked her what happened to the one I got from the bus depot. Well, she realized it didn’t match her outfit after all, then she let out a hearty laugh.

I remember struggling to laugh, too, while thinking of the much-needed nap I missed. But who can ever get mad at loveable little Llita, she with her tender, motherly affection and cheerful disposition? Besides, she was my guest—and my dear friend!

My friendship with Llita became stronger even after she retired from Inquirer. When my eldest son started his college years at Ateneo, it became a nagging problem for me because we live in Malate and it would take my son forever to get to school. Most of the time he would be late.

When Llita heard of it, she immediately offered her house in La Vista, the backdoor of which led directly to the school grounds. Of course, without batting an eyelash, I rented the room in her attic for my son. My dear friend, Llita, was my deus ex machina.

I guess boredom set in during the early years of her retirement because she dabbled in another broadsheet and needed people to write columns for its Lifestyle section. She asked my son and daughter to do a “he says, she says” type of advice column for teenagers.

Even without remuneration, my children took the task seriously, as they enjoyed answering all those letters from people their age. My daughter, who now lives in Seattle, still talks to her American friends about that “Dear Abby” period of her teenage life.

Llita must have grown quite fond of me, too, because she asked me to cut the ribbon to officially open her first art exhibit at the Philippine Embassy in Manhattan. It turned out to be a big social event for the well-heeled New York-based Filipinos, like Josie Natori, Cristina Valdes and many others, who all raved about her colorful and attractive masterpieces.

When I retired from the airline and put up my own public relations and advertising agency, I hired Llita’s services for the press releases I needed for the clients. She worked from her house and was my copywriter for so many years, until the time when her aches and pains started to slow her down. Even after that, I’d still be in touch with her every now and then.

Llita will always be special to me and my children. She was the ultimate “mother figure,” always ready to care for her loved ones. In fact, I’m sure that Up There where she is now, she has gone shopping right away, living up to being a “blackbelter” in that category, and is now loaded with heavy packages and bags overflowing with good graces and blessings for all of us she left behind.

Valuable things do come in small packages, but dear loveable little Llita was actually a giant as a friend! Thank you, Manang Llita, for the motherly love, the support, and the laugh sessions we had during our many trips together.

Just like the others whose lives you’ve touched, I consider myself blessed for having been given the privilege of sharing a part of your life’s journey. I will miss you. In parting, as we Cebuanos say it, “Sige, Nang, kita na lang unya ’ta!”

The author is the senior officer in charge of the College of International Tourism and Hospitality Management of Lyceum of the Philippines University, Manila campus.