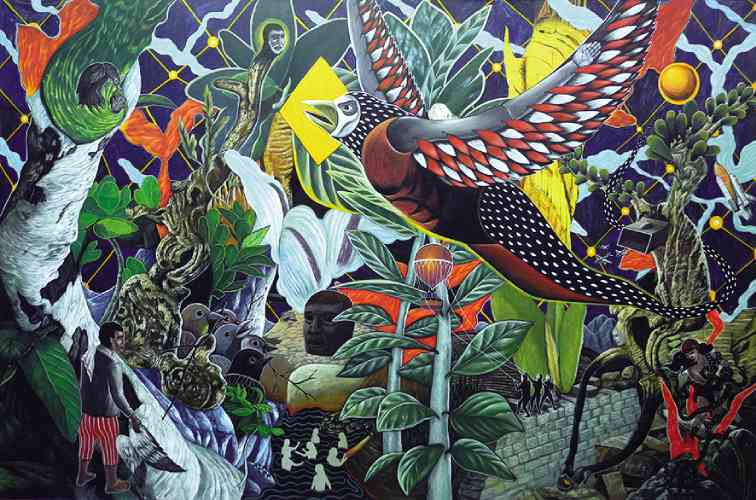 Since winning the Signature Art Prize in 2011, Rodel Tapaya, 32, has become the darling of international art dealers, perhaps because of the curious story behind the work that won for him the top prize in the triennial contest sponsored by Asia-Pacific Breweries Foundation of Tiger Beer.

The mural, “Baston ni Kabunian, Bilang Pero Di Mabilang” (Cane of Kabunian, Counted But Can’t Be Counted), had been bought the year before by Troche Deleon Collection and Art Vantage Ltd., both international art buyers, based merely on electronic images sent to them of the work. But even before it could be shipped to the buyers, the mural was nominated for the Signature Prize where it became a finalist.

Exhibited at Singapore Art Museum along with the other finalists, the work finally met its buyers, who had luckily come to town in time to hear the pleasant announcement by the international jury that their purchase had won the Grand Prix.

Sticking to his guns

It is easy to see why Tapaya has broken into the international art market that’s forever on the lookout for the latest conceptual conceit or the latest new brash kid on the block. He has prevailed by largely sticking to his guns and doing what he does best: painting a palimpsest of narratives that overlap and contrast one another.

Among the 2011 Signature finalists, Tapaya’s entry was unabashedly traditional, avoiding the introspective privation, self-monumentalism, and interactive gimmickry of much of contemporary art to lay out its case with minimal fuss.

Although “Baston ni Kabunian’s”  dimensions were monumental—305 x 610 cm acrylic on canvas—the other finalists, mainly installations, were just as large if not larger. Amid the aesthetic giganticism, Tapaya’s work won through sheer, artless art. I had called it then simply the triumph of painting.

Rodel Tapaya, therefore, provides a refreshing artistic corrective to the self-reflexive stasis of so-called new artists who can’t seem to compose without a conceptual thesis of “problematization,” whatever that means.

Not that Tapaya’s work is haphazard, naïve, or lacking in intelligence. But avoiding the pompous intellectualism of much of contemporary art, he has taken recourse to folklore, with its rich mine of mythical narratives that have been embedded in popular consciousness.

Admittedly such consciousness has been fostered in an agrarian setting that has largely vanished as a result of colonization, industrialization and urbanization; but Tapaya obviously feels that its recovery is in order if only to stop the debasement of nature in the name of progress and development.

In a manner of speaking, then, Tapaya is a pastoral artist and his work a new pastoralism.

His Signature Prize-winning work, “Baston ni Kabunian,” best embodies this new pastoralism. Its central image is a giant canine from the Bontoc myth that saved humans from the great flood. On the back of the dog is the Ifugao god Kabunian, who used a piece of cloth to form mountains and bring warmth to humans. Raiding his own Tagalog folklore (Tapaya hails from Montalban, Rizal), he adapted the fable of the glutton who turned into a frog.

Executed in 2010 amid the worst floodings caused by heavy monsoon rains and aggravated by forest denudation, the ambitious work had a caustic and powerful message. The jury pointed to its “multiple narratives and diverse allegorical references” through its use of Philippine folklore that “is neither naïve nor self-exoticizing practice.”

The work shares some notable features with the Jury Choice Award winners—Japanese Aida Makoto’s acrylic-on-canvas mural “Ash Color Mountains” (a very brilliant reinvention of Oriental landscape art that turns out to be a penetrating criticism of Japanese capitalism); Australian Daniel Crooks’ video “Static No. 12 [Seek Stillness in Movement]” (which utilizes slow-motion photography to chart the graceful movements of a tai-chi master); and Indian Sheba Chhachhi’s installation “The Water Diviner” (an ambitious work that transformed a public swimming pool under the New Delhi library into a public park with installations of morgued publications and lighted books showing episodes from the river god of the Ganges, considered sacred by Hindus).

According to the jurors, the winning works were “groundbreaking in their negotiation of cultural heritage and contemporary forms of expression.”

All of these works—traditional Oriental landscape painting turned around its head; martial and meditative art as tracked down and embodied in space and time; and bodies of water accorded powers of wisdom and mysticism—share with Tapaya’s oeuvre a general concern for a return to nature. Together they constitute a new pastoralism, a new romanticism.

In “Ladder to Somewhere,” Tapaya continues the recovery of Philippine folklore and myths and uses them as a critique of current social and environmental ills.

The works, according to the exhibit notes, “revolve around the intersections between disparate realms and notions of the earthworld and skyworld and [their] mortal and immortal inhabitants.”

Tapaya, the notes add, “will be doing what he does best in referencing Philippine mythology, folktales, and legends and their overlaps with history by linking fact and fantasy from different sources with shared themes or subjects.”

In mining Philippine folklore, Tapaya weaves in fantastic, pulsing colors and forms multiple narratives that, while strictly speaking are ethnically variant and even disparate, cohere in the final analysis through his artistic imagination.

One of the large acrylic works, “Like a Bird That Leaves Its Nest Is a Man Who Leaves His Home,” utilizes the Cordillera myth of Pangudyawon who, like Icarus, wished to become a bird in order to escape a difficult situation.

Complementing this is the related story of the girl from the constellations who took a bath on earth and, her wings having been stolen in the process, was forced to live the life of a mortal. A contrasting motif is the story of a man who was born with just his head and went through life assisted by birds.

The overarching theme of the work—flight and freedom—is rendered in a crisscross of tales and myths that, while they may be canceling each other out at first blush, really fit together inexorably in the integral artistic portrayal of self-assertion and adventure, as well as blunt existential confrontation with limits and thresholds.

As may be noted from the work, Tapaya has always raided the stories of his childhood in order to define his identity and guide himself through his adulthood. Growing up in Montalban, he had heard of several myths, such as Bernardio Carpio stopping two mountains from fighting, so that his giant hands had been imprinted on Wawa Dam and his left foot had left its mark in Antipolo.

Tapaya said he had always banked on these stories for sources of his “narrative art.” To some extent, his artistic trajectory is one of a return to childhood, a return to innocence.

Romanticism as a return to nature and the return of the native is balanced by self-correcting realism.

The fantastic fauna in Tapaya’s canvases owes to the artist’s fascination with wild overgrowth, especially of mangroves, whose sturdy, gnarled branches he has likened to “stories” that get passed from one generation to another, and modified along the way, depending on their wild outreach, their fantastic growth.

To some extent, Tapaya may have substituted the metaphor of the mangroves for rhizomatic thinking to justify the palimpsest of myths, their gnarled entanglements, that he often takes recourse to in his epic canvases. This explains the often overlapping narratives in his work that, in their wild overgrowth, may conflict and jar, but ultimately come together through the conceit of organic imagination.

It is not easy to define Tapaya’s artistic progenitor. The Signature jurors said he came from the “Philippine mural tradition,” thus situating him along the line of “Botong” Francisco and José Blanco. The jurors also noted his “audacious use” of Latin American magic realism and Bosch-like phantasmagoria.

All of this may be correct, but it is also correct to say that, stylistically, Tapaya’s idiom may hail from Henri Rousseu (1844-1910), who painted highly allegorical works that condemned war, as evident in “War, or the Cavalcade of Discord” (circa 1894), which portrayed Bellona, the goddess of war, with the horrible mouth of a carnivore.

By his raid of Philippine folklore, Rodel Tapaya constitutes his own “Jacob’s ladder” to ascend the heavens and mine them of their mysteries and revelations so that he can descend and bring them down as lessons and guides for current events. He has built a ladder of perpetual intercourse between past and present, myth and reality, art and life.