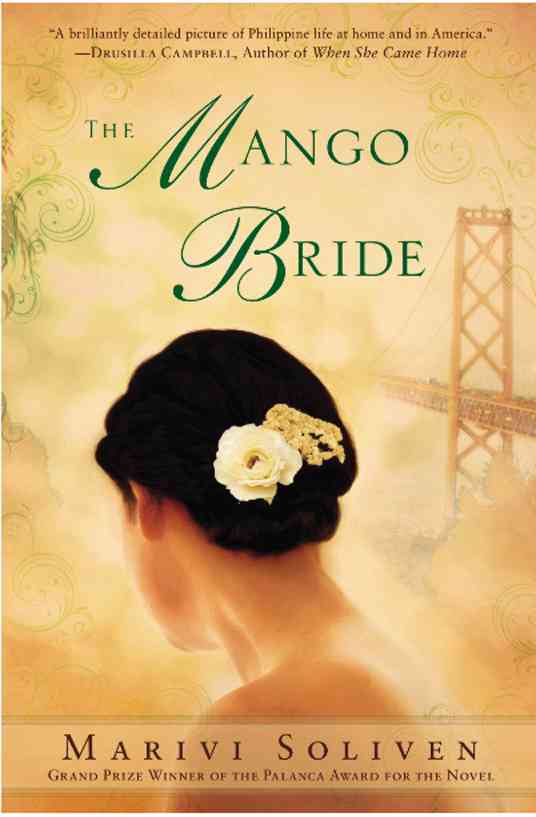 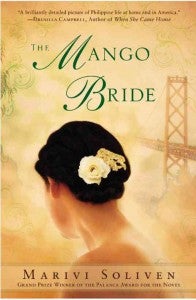 All families have their secrets, but in fiction, the wealthier and more powerful the family, the more secrets they keep. Make it a wealthy, fictional Filipino family, then you will have secrets that will inevitably come back to change everything.

This is what lies hidden in the luscious heart of prize-winning writer Marivi Soliven’s first novel, “The Mango Bride” (NAL Accent, New York, 2013, 371 pages), a cunning chronicle of the Duarté-Guerrero clan’s covert compromises and the resulting consequences.

The 2010 winner of the Palanca Award for the Novel, “The Mango Bride” begins with an appropriately scandalous event: During breakfast, the Guerrero’s longtime cook, Marcela, takes a knife from a plate of mangoes and stabs Señora Concha Guerrero in the chest.

Gossip spreads from there, stretching out to the Bay Area, where Concha’s daughter Amparo works as a Tagalog telephone-based translator.

The formerly naïve Amparo is intelligent and willful, disgraced for love and cruelly exiled by her mother to the United States. It is Amparo who, in figuring out why Marcela did what she did, will accompany the reader on a trip to the past and the truth. The phone call opens up very old wounds and awakens unforgiven slights.

But what then is Amparo’s connection to Beverly Obejas, now living unhappily in Oakland? The former waitress was also naïve and hopeful, dreaming of “a parallel universe that was cleaner and more fragrant than her own.”

After a past touched by tragedy, Beverly had put all her hope in following her friend Lisa’s suggestion and become a mail-order bride.

“The girls are all so sweet that we call them our Mango Brides,” boasts the lady at the mail-order bride agency.

Mostly set in 1995, “The Mango Bride” employs a series of strategically placed flashbacks throughout several points in time to uncover how Amparo and Beverly got to be where they were.

At the beginning, there is a nebulous distance between them, as wide as a continent yet as narrow as a table. But when they finally meet, the novel plummets to its conclusion with conviction, leaving the reader to know nobody will be spared when all is done.

Already well-furnished with a dishy premise, “The Mango Bride” is briskly paced and armed to the teeth with great characters.

Amparo is the headstrong heroine, seeking to find herself regardless of where she is. Beverly—named after California real estate—is the sad sack maiden seeking what she thinks is a better life.

A winning presence is Marcela, the rind that ties “The Mango Bride” together; she’s realistic and sympathetic.

In the process of tying these lives together, Soliven dutifully provides a portrait of the Filipino-American experience. One character pointedly asks Amparo, “My heart is in America. Where is yours?”

Soliven elevates what could easily have been grist for the teleserye mill through precise prose and an ambitious plot.

Soliven connects many seemingly random elements—a mishandled dish during dinner; an elephant running wild in Quezon City; an unseasonably strong typhoon—and recreates these detailed elements with a studied vigilance and a knowing eye for exactly where everything needs to be. She gets the cadence of different voices right, giving “The Mango Bride” that spark of authenticity and that touch of familiarity.

This is a novel of juxtaposition, of obligation and infidelity, of passion and practicality, privilege and limitation. A pretty page-turner, Marivi Soliven’s “The Mango Bride” is a dizzyingly enjoyable feat of storytelling that beguiles us with how all these disparate lives touch and proves to us that, in the end, everyone gets what they deserve.

After all, Marcela reminds us: “Too many lives have been ruined by these secrets.”