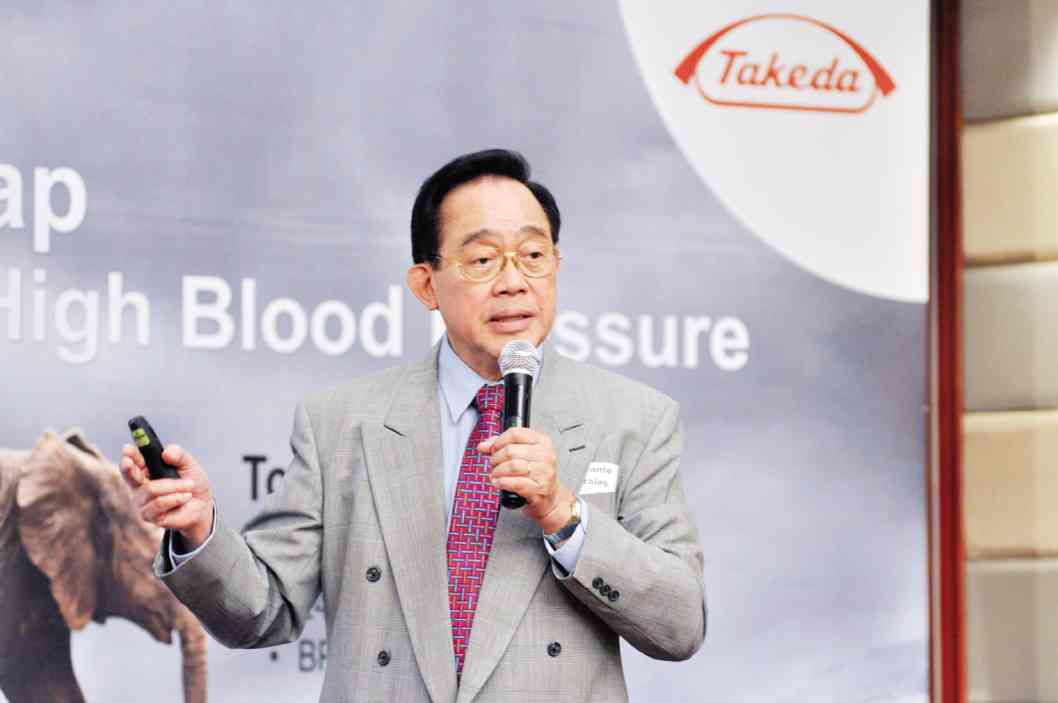 The recent media briefing by research-based global pharmaceutical company Takeda on “Bridging the Gap in the Management of Hypertension” revealed that rising numbers of Filipinos were suffering from hypertension.

The study, conducted by the National Nutrition and Health Survey II, states that 20.6 percent of Filipinos suffered from hypertension in 2008 compared to 16.4 in 2003. That’s an increase of 4 percent in just five years.

Even more alarming is the low awareness among Filipinos of the disease. Only 16 percent of the patients know the consequences of having high blood pressure.

“If I ask you what your body weight is, you can tell me. If it changes by 2 kg, you get worried. The same should go for your blood pressure. If it goes up, you should take the tablet. Medication is not something you can postpone,” said Dr. Hermann Haller, professor of medicine at the University of Hannover and director of the Department of Nephrology and Hypertension at Hannover Medical School, Germany.

Hermann’s call for urgent treatment is for a very good reason. Hypertension is the no. 1 killer worldwide, he said. While hypertension does not kill you immediately, it is the condition that leads to myocardial infarction (heart attack) and stroke.

Uncontrolled hypertension, when target blood pressure is not achieved despite medication, increased dosage or a combination of medicines, increases the risk of heart problems and stroke. As a general rule, blood pressure should be below 140/90.

“At any age, it is necessary to have a low blood pressure to decrease your risk for certain diseases. Control is an issue. You lose control over your organs when you are not able to control your blood pressure,” he said.

And just because 140/90 is the acceptable blood pressure doesn’t mean you’re still good if your reading is, say, 145/95. If blood pressure goes up by a mere 10 or 20 millimeters of mercury (mmHg), your risk doubles.

Some high-risk patients, such as those with who’ve had a stroke, heart attack or diabetes, should also maintain a lower blood pressure than the norm. “Doubling of risks is not acceptable even if it’s still within normal levels,” said Inquirer health columnist and heart specialist Dr. Rafael Castillo.

“People have to understand why they are being treated. Preventing major events like stroke or heart attack are hugely important in terms of quality of life,” said Dr. Alan Gradman, professor of medicine at Temple University School of Medicine in Pennsylvania.

“There is a correlation between nondippers and cardiovascular event,” Morales said.

For the 96 percent of hypertensive patients, the cause of the disease is unknown. Patients are broadly grouped into the genetically predisposed and those influenced by environmental (lifestyle) factors.

Morales said the top contributing factors that lead to hypertension include weight gain (an increase of about 5 mmHg in blood pressure is observed per 10 lbs of weight gained), high calorie intake, high salt consumption (the World Health Organization set a limit of 1 tbsp of salt a day or about 6 g of all salt and sodium consumed, including those used in cooking and at the table), lack of exercise, and too much alcohol consumption.

Lifestyle changes, along with proper medication, will help reduce and control blood pressure. Morales also added that patient compliance with medication drops by almost 60 percent when they take medications at three or more different times of the day. Many patients take a combination of two or three pills on top of other medications. It is therefore important, added Hermann, to have one pill that can control blood pressure at different times of the day.

Hermann said studies measured Azilsartan against other similar ARB drugs available in the local market today. The study showed that a dosage of 80 mg Azilsartan lowered blood pressure by 14.3 mmHg, compared to 11.7 mmHg with Olmesartan 40mg and 10 mmHg with Valsartan 320 mg.

Also from Takeda is a once-a-day combination drug for the elderly with hypertension. Blood pressure goes up as people age. By creating a fixed dosage of an ARB and calcium channel blocker in the form of Candesartan-Amlodipine, the two-in-one pill makes it easier for the elderly to not miss medication.

The pressing issue for the elderly is preventing strokes. Oftentimes senior citizens are the most neglected, said Gradman. People figure, for instance, that if you live to be 80 you must be doing something right. Why fix something when it isn’t broken? But that’s not true in this case.

Heart failure is the most common reason for admission to the hospital for people over the age of 65, Gradman said. The elderly treated with Candesartan-Amlodipine reduced fatal strokes by 45 percent, all strokes by 28 percent, total mortality by 28 percent and heart failure by 72 percent.