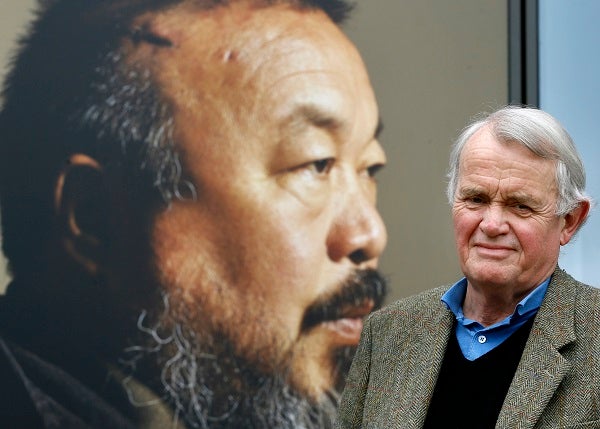 In this photo taken Thursday, April 11, 2013, playwright Howard Brenton, author of a play about Chinese contemporary artist Ai Weiwei called '#aiww: The Arrest of Ai Weiwei' stands by a poster for his play at Hampstead Theatre in London. Brenton, 70, is one of Britain's best-known playwrights, whose work has ranged from provocative history play "The Romans in Britain" - the focus of a famous, failed prosecution for obscenity in 1982 - to journalism satire "Pravda," co-written with David Hare. AP

LONDON— Ai Weiwei appears to be standing in front of a London theater, which would be some trick, even for the provocative and unpredictable Chinese artist.

The sculptor, photographer and installation artist renowned for his bicycles and sunflower seeds spent almost three months in detention in 2011 and remains barred from leaving China.

At second glance the burly, bearded figure turns out to be British actor Benedict Wong, who is about to star as the artist in a stage play about his incarceration. The play was Ai’s idea, and though he won’t be there for Wednesday’s opening night at the Hampstead Theatre, it’s the latest act in his artistic campaign for freedom of expression.

“The play is part of his project,” said Howard Brenton, the British playwright who has scripted “(hash)Aiww: The Arrest of Ai Weiwei.”

“Early in the rehearsals we were having a discussion and we suddenly thought, ‘Oh, we’ve all been sucked into his project.’ Which is fine. He asked for the play, we’ve delivered it.”

Brenton is a little worried about reaction to the play — though not from the critics. Ai’s long history of needling the Chinese authorities has often had serious consequences.

The 55-year-old Ai is one of the world’s most famous artists, celebrated abroad with exhibitions from Tokyo to London to Washington, D.C. At home, he has been alternately encouraged, tolerated and harassed by officialdom.

He helped design the striking “Bird’s Nest” stadium for the 2008 Beijing Olympics, but the next year was beaten so badly by police he needed surgery for bleeding on the brain.

He was encouraged to open a studio in Shanghai — but officials later ordered it knocked down.

In April 2011 he was arrested at Beijing airport and held for 81 days without explanation during a wider crackdown on dissent that coincided with the international ferment of the Arab Spring. On his release, it was announced that he had confessed to tax evasion and been slapped with a $2.4 million bill.

Brenton’s script is based on interviews Ai gave to British journalist Barnaby Martin shortly after his release, and published in book form as “Hanging Man.”

The script captures both the fear and the absurdity of being detained without charge. Ai was first questioned by Beijing murder squad detectives, who had no idea who he was and began their interrogation by demanding: “Who did you kill?”

“It may have been deliberate that they didn’t want people who were in any way sophisticated, so he couldn’t get at them,” Brenton said. “The extraordinary thing is that he did end up discussing art with his interrogators.”

Ai never learned what his questioners were after, or why he was eventually released. He suspects the detention was related to a series of works made in response to the Sichuan earthquake in 2008, in which more than 5,000 children died when poorly constructed schools collapsed.

His release came after international pressure from artists, politicians and human rights activists— and, possibly, a shifting balance of power inside the Chinese Communist Party.

For the play, Brenton drew on research trips he had made to China for an abandoned television project. He stuck to Ai’s account of the interrogations, but drew on his own imagination for two scenes in which bureaucrats discuss what to do with the troublesome artist.

“I put in a line: ‘Maybe Ai Weiwei in jail would be his most powerful work. We must avoid that,'” he said.

Brenton, 70, is one of Britain’s best-known playwrights, whose work has ranged from provocative history play “The Romans in Britain” — the focus of a famous, failed prosecution for obscenity in 1982 — to journalism satire “Pravda,” co-written with David Hare. His recent plays include excursions into British history with Tudor story “Anne Boleyn” and a drama about deposed King Charles I, “55 Days.”

Throughout his plays, Brenton has often explored a theme close to Ai Weiwei’s heart and work: The relationship between the individual and the state.

Although Ai’s art takes varied forms, encompassing architecture, sculpture, photography and video, the importance of free expression — and the ability of the individual voice speaking up against authority — is arguably the central theme of all his work.

He has stacked hundreds of bicycles into giant sculptures that spoke of individuality, mass production and Chinese identity, and spread 100 million ceramic sunflower seeds — seemingly uniform yet subtly different — across the floor of London’s Tate Modern.

One recent piece was a “Gangnam Style” parody video entitled “Grass Mud Horse Style” in Chinese, a sly insult Ai coined as a stab at the country’s Internet censors, its Chinese characters homonyms for a vulgar slur. The video, which featured Ai doing a PSY-style horse dance while waggling a pair of handcuffs, was soon blocked on the Internet in China.

“Without freedom of speech there is no modern world — just a barbaric one,” Ai said in a statement released to coincide with the play.

It’s not a message intended solely for China. The April 19 performance of the play will be streamed online around the globe in a move, Ai said, to “bring the play’s themes of art and society, freedom of speech and openness, the individual and the state to a new, broad and receptive global audience.”

It’s uncertain whether Internet users in China will be able to see it.