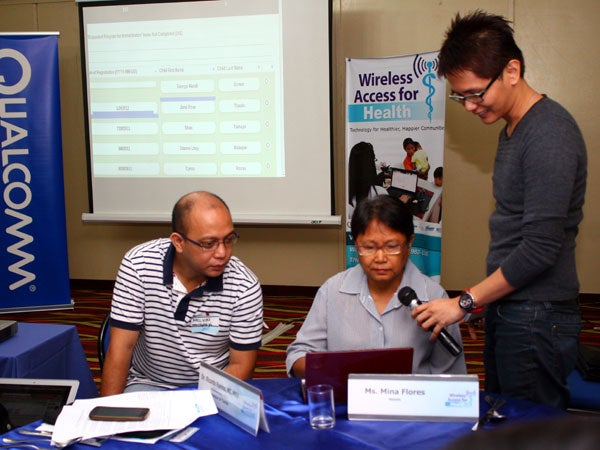 Fermina Flores (center), a midwife in Gerona, Tarlac for more than 30 years, demonstrates how she works as a "mobile midwife" under the Wireless Access for Health project that give technology to health workers to improve their services. MATIKAS SANTOS/INQUIRER.net

MANILA, Philippines—Fermina Flores, 60, has been working as a midwife in the municipality of Gerona, Tarlac for the past 34 years, covering four barangays (villages) with a combined population of around 8,000.

And she does it all with the help of her high-tech 3G wireless data network-capable tablet computer that can record patients’ health information and report it to the nearest health clinic or even to major hospitals.

Flores is among the first of a new kind of health worker in the Philippines: “the mobile midwife” that is made possible through international mobile technology company Qualcomm Incorporated’s “Wireless Access for Health (WAH)” project with the Department of Health (DOH).

“The WAH project uses 3G technology to improve health care by reducing the time required for reporting and by improving access to accurate and relevant patient information,” Qualcomm said in a statement during their recent press event.

“Since the project was implemented in 2009, it has been successfully adopted in 37 city and rural clinics within and outside of theTarlac Province. These clinics serve more than 2,000 patients a day and as of March 2013, more than 250,000 patient consultations and 220,000 patient records have been recorded through the WAH platform,” it said.

Flores said during the event that, before the WAH provided her with a tablet computer, she had to manually record thousands of patients’ health data on paper every day after making her rounds and then encode it in another database in the clinic.

But now through the WAH project, she encodes the patients’ health information into her tablet while she is doing her rounds and it is automatically uploaded on  the internet to an online database for clinics and hospitals to access.

Flores, however, admitted that she was initially apprehensive in using computers because she has long been accustomed to the manual process.

Three years since the WAH was first implemented, Flores now carries with her netbook and tablet computers and no longer uses paper forms for patients’ health records.

Having a computerized database of all the patients’ records has also helped health clinics in Tarlac province to deliver services faster because of the easily searchable data unlike before when they had to go through a large number of records manually, Flores said.

It can also improve the coordination of patient referrals from the clinic to the hospital since a patient’s entire health record will already be accessible in the hospital instead of having to wait for paper documents to be transferred.

Ernesto Garilao, President of the Zuellig Family Foundation which recently committed its full support for the project, said that “in far-flung areas in the province where the nearest hospital is hours away, proper health records could mean the difference between life and death of the local residents.”

The WAH project with the help of the DOH and local government units, is seeking to expand to the nearby provinces of Ilocos Norte, Ilocos Sur, La Union, and Pangasinan.

“We have witnessed the tremendous benefits the WAH project has already brought the people of Tarlac, and we look forward to working with our allies here in Ilocos from both the public and private sectors to expand the project,” Dr. Benito Arca, assistant regional director of DOH Ilocos, said in a statement.

WAH’s partners from the private sector include Smart Communications Inc. and Zuellig Family Foundation among others.

With more support, Arca said that he hopes WAH can eventually be implemented on a nationwide scale to dramatically improve the health service of the entire country.