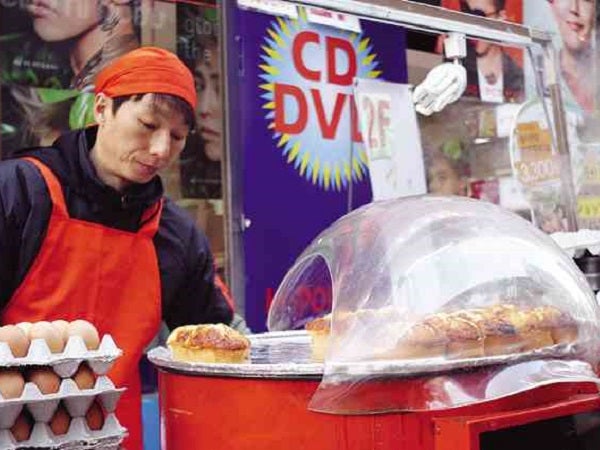 Seoul food carts: You may even catch your favorite K-pop/ Koreanovela stars grabbing a bite

Thanks to my distrust of weather forecasts, I found myself shivering in Seoul last week. Though various weather sites predicted lows of 1-degree Celsius, I still insisted on dressing up like it was spring, foregoing heavy socks and tights in favor of loafers and cotton leggings.

As soon as the sun went down, the lower half of my body felt encased in ice. Each step I took felt as if my soles were treading on sharp ice needles. Apart from the shops with heaters in full blast, the food carts scattered on the busiest streets of Seoul would become my refuge.

A tray heaped with hot tteokbokki—gummy rice cakes that resemble fingers drenched in spicy sauce—would send much-needed heat zinging through my mouth all the way down to my toes. The man behind the pojangmacha, the Korean term for food carts, scooped broth into a paper cup and handed it to me.

The broth was from the two small rectangular vats where sticks of odeng or fish cakes had been stewing for a while. 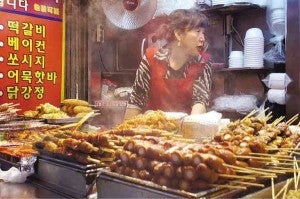 The fish cakes looked like ribbons of tofu or scrambled egg in the skewer and gave the steaming broth a delicious flavor.

Gulping down the scalding broth would burn your tongue, but the warmth that would cascade down your body would make the burn worth it.

Eating your way through the varied contents of a pojangmacha is not only a good way to quell hunger pangs for less (the prices of the dishes range from P40-P100), it’s also one of the best ways to experience Seoul.

If you’re lucky, you may even catch one of your favorite K-pop/Koreanovela stars grabbing a quick bite. Some of the carts have photos of their famous Korean celebrity patrons pasted along the cart’s walls.

The beauty of each pojangmacha is its variety. In Myeong-dong, Seoul’s most popular shopping street, two carts in one of the alleys sell Yangnyum chicken—boneless chicken meat coated in sweet batter, fried to a golden crisp and drizzled with sweet, spicy sauce (expect most sauces in Seoul to have that bite). There are skewers and plates for the more adventurous, like soondae (blood sausages) or bundaeggi (boiled silkworm larva).

The carts also offer Korean variations of popular American and Japanese fare. The hotdog-on-a-stick sometimes takes the form of a corn dog, dipped in batter and double-fried.

If corn dogs are too common for you, try the calorie bomb version, where the batter-encrusted hotdog is covered with a thick layer of crisp, crinkle-cut French fries. 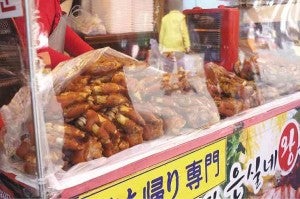 For a light snack, you can grab crisp, sweet potato sticks, dried squid/fish which is grilled before being served to you, and corn-on-a-cob (Korean corn is less sweet as ours, paler in color and a bit gummier). If you happen to be freezing in Seoul, you can also buy freshly-roasted chestnuts, and stuff it in your pockets as an instant handwarmer.

Some street fare are also seasonal. When the sun is out, stalls selling freshly-squeezed lemons mixed with lime soda crop up. They pour into a plastic pouch with a straw.

Spring time is strawberry season in Seoul, and plastic cartons of the succulent red fruit can be had for less than P200.

A few carts have become popular tourist spots as well. At the entrance of Namdaemun market, a small stall can barely be seen because of the lines of people blocking it. The stall is known for hodduk or pancake which is served two ways—filled with either japchae (sweet potato noodles) or with a honey seed paste.

As you wait for your turn, you will see a woman dipping her plastic-covered hands in a blue pail. She pulls out a gooey, wet, yellowish dough which she slaps around her hands to soften and form into a ball.

In front of her is a table filled with plastic tubs of japchae. You will be asked to choose between the tubs filled with glass noodles and vegetables. One tub has beef mixed in with the noodles, while another is just vegetables and noodles.

The japchae is stuffed into the dough and transferred to the guy manning the tub of oil where the hodduk is dunked and deep-fried until it becomes crisp around the edges. It’s the Korean deep-fried version of our pancit in a pan de sal—the best japchae donut you will ever taste. The slightly sweet dough combined with the salty noodles and vegetables will leave you wanting a second (or third) helping.

If you plan to visit Seoul for the first time, make sure to include in your itinerary a pojangmacha tour. It will fuel the next stop of your great Korean adventure.