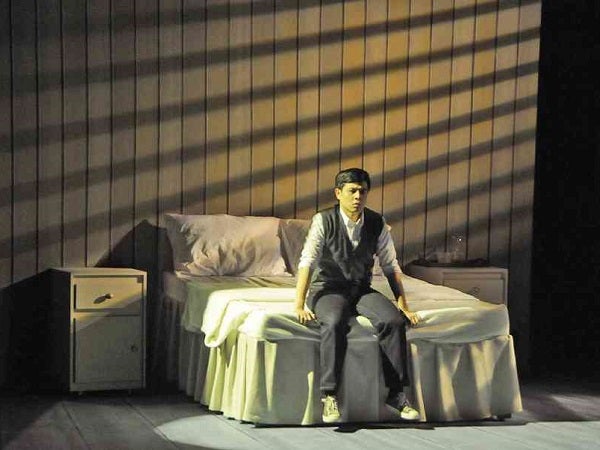 REB ATADERO as Benjamin Braddock in Repertory Philippines’ “The Graduate,” running until April 28 at Onstage, Greenbelt 1

The red flags come up early in Repertory Philippines’ production of “The Graduate,” the screen-to-stage adaptation (running until April 28 at Onstage, Greenbelt 1) otherwise directed with customary gloss and professionalism by Jaime del Mundo.

Playwright Terry Johnson ostensibly sourced the text from both the original 1963 novel (more like a novella, actually—it was that slim and spare) by Charles Webb, and the screenplay by Calder Willingham and Buck Henry that became the basis for the classic 1967 film by Mike Nichols which turned Anne Bancroft into an improbable object of adolescent wet dreams for a generation or two of moviegoers, and launched Dustin Hoffman into stardom.

We say “ostensibly,” because while this adaptation incorporated a chapter from the book not included in the movie (that one about Benjamin’s solo jaunt among firemen and hookers), Johnson in fact altered the DNA of the material by hacking off or rewriting whole passages and adding four brand-new scenes, the unfortunate result of which turns the savage, razor-sharp human comedy we fondly remember in “The Graduate” into a limp, frazzled facsimile of itself.

The first inkling of this comes minutes into the play: As Mr. Braddock (Del Mundo) coaxes Benjamin (Reb Atadero) out of his room to greet the posse of tanned, vacuous California well-offs partying in the Braddocks’ living room to toast his return from college, Benjamin refuses to meet them, finally blurting out: “They’re grotesque, Dad! I’m grotesque! We’re all grotesque!”

Huh? Benjamin, the disaffected 20-year-old rendered painfully awkward and near-inarticulate by his sense of ennui—“We see and hear the incomprehension in his very language, which is dull and inexpressive,” said the writer Hanif Kureishi—sounding this overdramatic?

The book and movie sketched no such thing, but a more nuanced moment with Benjamin asking for some time alone by telling his father: “I’m grotesque. This house is grotesque. It’s just this feeling I have all of a sudden. And I don’t know why.”

Next comes the pivotal seduction scene. Mrs. Robinson (Pinky Marquez) barges into Benjamin’s room, lights a cigarette and tries to engage the boy in intimate talk by revealing she’s an alcoholic. When Benjamin asks her to leave, she asks him, instead, to drive her home.

At which point Benjamin sputters in embarrassed protest, ticks off Mrs. Robinson’s suspect actions so far—“You start opening up your personal life to me, you ask me to drive you home”—and then that famous question: “Mrs. Robinson, you’re trying to seduce me. Aren’t you?”

The movie dialogue, culled from the book, is this: “For God’s sake, Mrs. Robinson. Here we are, you got me into your house, you give me a drink, you put on music. Now you start opening up your personal life to me and tell me your husband won’t be home for hours.”

Mrs. Robinson: “So?” (Sitting on a bar stool, she lifts one knee—cut to that iconic image of Hoffman framed by the crook of her leg.)

“Mrs. Robinson, you’re trying to seduce me. Aren’t you?”

For the play to transpose the seduction scene from the Robinsons’ empty house to Benjamin’s room while his parents, as well as Mrs. Robinson’s husband and a whole menagerie of their nosy friends, are downstairs—and for Benjamin to arrive at his moment of realization merely after Mrs. Robinson’s request for a drive home—comes off as disingenuous, a cynical way to cut corners.

Webb’s original sardonic voice, hilarious in the book and movie for its precision and irony, is clearly being forced into the guise of farce, and the slip shows.

The clearest confirmation of that fatal shift in tone comes minutes later, when, with Mrs. Robinson safe in the bathroom after having appeared in the altogether before a shocked Benjamin, the woman’s husband (Jeremy Domingo) comes in, barely missing the scene. Noticing the sweaty, distraught boy, he asks what the matter is. “I’m just worried about my future,” says Benjamin.

The audience laughs at this, of course. How could they not, when the play sets it up as a punchline?

But worrying about the future is exactly Benjamin’s honest dilemma. It’s a sentiment he has expressed at least twice before, to his dad and Mrs. Robinson, in scenes the play had apparently cut out. It’s also the heart, not incidentally, of why “The Graduate” became such a touchstone piece of pop culture in its time (an early poster of the film carried the tagline: “This is Benjamin. He’s a little worried about his future.”).

That sense of uncertainty was what fired up the generational rebellion brewing up in Benjamin and his real-life peers—their rejection of the deadening materialism (“Plastics!”—enthused Mr. McGuire, a businessman-associate of his dad; in the play, it becomes Mr. Robinson’s line) and sclerotic worldview of their parents and the larger establishment.

To treat this line now as a fib, a throwaway riposte in a bedroom gag, renders nonsensical much of Benjamin’s angst and virtually robs the “The Graduate” of its satirical snap. The play must now strain at desperate comedy, at one point even involving Mr. Robinson, in a (badly-written) new scene near the end, wielding an ax at Benjamin.

Cara Barredo plays the girl with a high-pitched, saccharine edge—an Elaine contemporized into a well-traveled woman passionate about art and civil-rights issues but who, in Benjamin’s presence, wilts and frets that she’s an intellectual inferior. And in a wholly gratuitous drunken scene between mother and daughter after Mrs. Robinson’s secret is revealed, she is given lines such as: “Love is littler and littler until it’s gone… I’m gonna have a forever love.”

Johnson must have confused “The Graduate” with that benchmark movie of a different decade, “Love Story.”

So how does Marquez’s Mrs. Robinson fare in this overripe environment? She works hard for the allure, certainly. Marquez’s early scenes gleam with imperious relish, her arch line readings sometimes approaching high camp (“Dahling,” she calls Benjamin; asked about her college course, she replies, “Aht”).

But Marquez’s naturally warm, maternal exterior proves hard to subvert, especially with embellished scenes meant to show her character in a more sympathetic light that, in the end, only saddles Mrs. Robinson (Kureishi again: “One of the great monstrous creations of our time”) with verbose explanation and backstory.

Ultimately, it’s a performance that recalls what The Daily Mirror’s Tony Purnell said of Kathleen Turner’s much-ballyhooed debut of the part in the West End: “It will not win her a Bafta but she deserves a medal for bravery.”

(Don’t ask us why he cited the British Academy of Film and Television Arts instead of the Olivier Awards—which snubbed Turner’s Mrs. Robinson, by the way.)

The medal for accomplishment should go, instead, to Atadero, who creates a winning Benjamin of nervy intelligence and fine tragicomic flair. Even at its most off-putting (Johnson’s tacked-on scene at the church, for instance, has Benjamin badgering Elaine to marry him ad nauseam), Atadero’s profile of youthful dysfunction is never less than sympathetic.

Because of the parade of skin-baring middle-aged vixens who have become associated with the stage Mrs. Robinson, from Turner (who also brought it to Broadway) to Anne Archer and Jerry Hall in London, the part has all but overshadowed the emblematic role of the restless young man whose grand act of giving the old taboos and proprieties the finger—having an affair with a married older woman, then running off with her daughter—in fact constitutes the vital central drama of “The Graduate.”

How many do remember that it was Jason Biggs—of “American Pie”—who squared off against Turner in New York? Here, Atadero’s smartly measured turn has the effect of righting the balance for his hapless alter-ego.

Is it fair to judge the stage adaptation against the book and movie? Well, other than the fact that the play itself claims to be more faithful to the original text, the theatrical version has no qualms borrowing from and regurgitating tropes made familiar by the film.

It opens, for instance, with the heavy, anxious breathing Benjamin makes inside the scuba diver’s mask given to him by his dad—a device that Nichols used to brilliant effect in the film to underline the young man’s sense of alienation and disorientation.

Mio Infante’s perspective set of louvered walls and panels not only reinforces that sense of isolation with its often dead-center framing of the action; when lighted (by John Batalla), it also relives the shaded, broken lighting of Benjamin and Mrs. Robinson’s hotel trysts in the film, a visual cue to the illicit nature of their relationship.

There, too, is the essential music of Simon and Garfunkel accompanying crucial moments in the play, or their words sometimes employed as inner monologues (sung as a cappella voice-overs by Atadero) to punctuate or frame scenes.

And a couple of visual jokes—Benjamin and the hotel bellboy (Joel Trinidad, also the hippie psychologist and a couple of other characters) inadvertently fighting over the bell, and Mrs. Robinson blowing smoke after Benjamin’s first gawky attempt at kissing her—come straight from the movie.

All these are efficiently and quite seamlessly directed by Del Mundo. But because he has hewed to the adaptation’s newfound spirit of inflated, knowing flippancy, the material, for all its giddy energy, seems a diminished version of its antecedents, far flatter and flimsier than it ever was. In academic terms, this “Graduate” would be a squeaker.