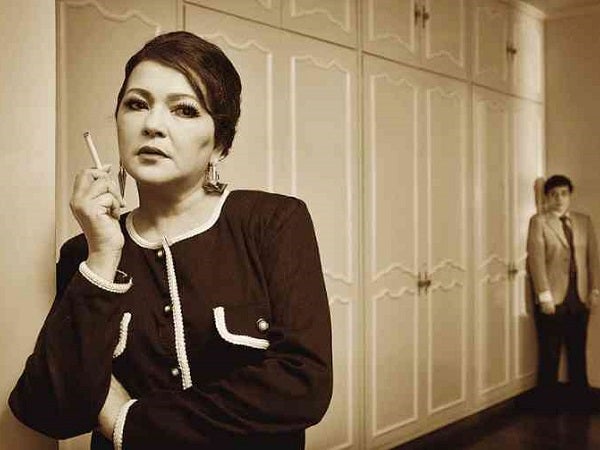 PINKY Marquez: “Mrs. Robinson is what any woman would have wanted to be. Free. Not boxed up.”

The first cougar? Here’s to you, Mrs. Robinson

Even in modern times, the character of Mrs. Robinson— from the acclaimed film “The Graduate”—remains the subject of much controversy and abuse.

She’s been called an alcoholic, a slut, a degenerate who seduces younger men, the first and original incarnation of the present-day, equally maligned phenomenon of the cougar.

And yet one wonders whether she does deserve all the mudslinging. After all, do we really know her? What does she hide in that place where no one ever goes? The mystery that is Mrs. Robinson is forever enshrined in the enigmatic Simon and Garfunkel song bearing her name, but perhaps some glimpse of an answer can be found in Repertory Philippines’ new staging of “The Graduate,” starring Pinky Marquez and Reb Atadero.

Product of her time

So, who was Mrs. Robinson?

“I don’t think you can call her a cougar,” says Pinky Marquez of her character. “Cougars go hunting for lots of different men. But in my own understanding, this was Mrs. Robinson’s first real affair. Perhaps she had flirted with the idea in her mind before, but it’s only in Benjamin that she found a young guy who would bring out her beauty, her sexual drive. She felt like a winner with him. And that’s all she wanted, to be appreciated. Every woman wants to feel that way.”

“She was a product of her time,” says director Jaime del Mundo. “We joke about it now, but in the ’60s it really was about the Stepford wife. And Mrs. Robinson rebels against that. If you look at her background you’ll see why. She was an art student, she’s a smart woman. But she’s been shoehorned into this perfect-wife role. And hence she rebels.”

Marquez agrees: “She’s really, really, really bored. She hasn’t had sex in four or five years! And this is where I think a lot of people today can relate to the play. There are a lot of bored housewives today. And there are lots of secret affairs happening all around. Like Mrs. Robinson, when you’re trapped in a sexless marriage, your libido gets so pent-up, it’s almost like it’s oozing out of you, desperate to be released.”

Reb Atadero, who plays Benjamin Braddock, offers his own perspective: “Mrs. Robinson is that friend of the family that you always found attractive… it’s just that, of course, it’s taboo, it’s wrong! And then all of a sudden, the opportunity presents itself—what do you do?”

“Benjamin is also bored,” Atadero adds. “I guess that’s what they have in common. He wants to break out of the norm of being, as he says. He finds everyone around him grotesque, perfect, corny, baduy. I guess Benjamin was just so bored that he decided to jump at the chance presented to him.”

So what does the young Benjamin Braddock see in Mrs. Robinson?

“He finds me real,” says Marquez. “All the other people were not real. I’m real. Because I did what I wanted to do. Mrs. Robinson is what any woman would have wanted to be. Free. Not boxed up.”

“This is a comedy about disillusionment,” says Del Mundo. “Everyone is disillusioned in their own particular way. But maybe one of the things I think we’re trying to say here is—in rebelling against disillusionment, a happy ending may be possible.”

And what of that famous seduction scene?

“That caused me sleepless nights at first! But now I embrace it,” says Marquez with a twinkle in her eye.