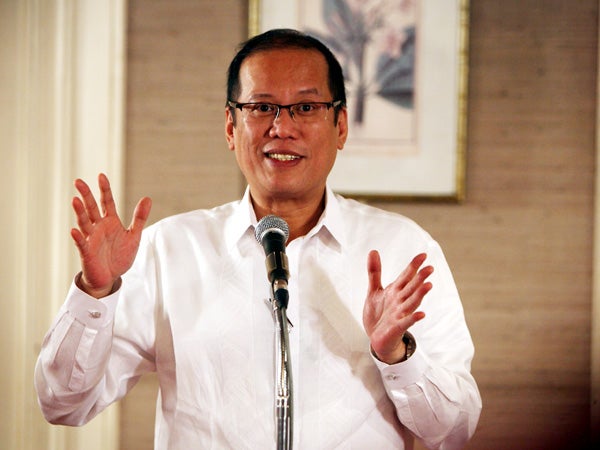 After an overnight stay at Shangri-La Mactan, President Aquino said he woke up Friday morning to a refreshing sight of tourists taking a dip in the sea or in the pool.

“Then I remembered it’s really nice to be on vacation. It’s been a long time since I had one,” the President told local officials and residents of Toledo City during a pep talk Friday afternoon.

“It’s in the Labor Code: I’m entitled to one day a week. I told myself, I should file a suit. But against whom? I’m the Chief Executive; I might end up suing myself. It’s not going to happen,” he added.

In previous out-of-town speeches, the 52-year-old bachelor President said he looked forward to the day he would be traveling to the countryside no longer as the country’s top CEO, but as a tourist, or even a honeymooner.

Because of his busy itinerary, he often gets reminders from Cabinet officials, especially Health Secretary Enrique Ona, to take some time off and go on holiday.

Aquino then segued to the wonders that tourism could do to the local economy. He said that tourists had a lot to choose from the many beaches and destinations in the province.

“So what if there are tourists? Well, the arrival of one tourist, especially from abroad, creates one job for a Filipino. There’ll be a need for a tourist guide; a place to stay and eat, and of course, somebody will craft souvenirs, among many others,” he said.

To meet the influx of tourists, whose arrivals have been breaking records on a national scale, Mr. Aquino said the government was upgrading the Cebu Mactan Airport to increase its capacity from the current 1.6 million tourists to 6.5 million tourists a year.

“In short, we’re expanding your facilities to ensure convenience for the arriving tourists. We’re adding facilities to encourage more tourists to come here and bring more opportunities to the Filipinos,” he said.

The initial phase of the expansion of the Mactan circumferential road was now undergoing bidding, and its original cost has been cut down from P300 million to P251 million, Mr. Aquino said.

He then reminded the residents about the scandal in the 2006 purchase of P365-million worth of decorative lamp posts in time for the Association of Southeast Asian Nations summit in Cebu the following year.

“Those were very expensive lamp posts. If the Mactan circumferential road was constructed in 2006, it would have been finished in 2009 at the latest,” he said. The local tourism industry would have benefited from the road. “It’s clear no tourists would come here just to take a look at the lamp posts. They don’t light up anymore, and worse, some are even missing.”

The trick, the President, was to abide by the 5 Rs:  right project, right time, right price, right people, right reason.

“It should go through all this, not something else. If you ask me, I don’t have any ambition of landing in the Guinness Book of World Records for having the most expensive lamp posts in the world,” he said.

He then made a pitch for Hilario “Jun-jun” Davide III and acting Cebu Governor Agnes Magpale, candidates for governor and vice governor, among other local officials,  saying they are his partners in governance.

“My job is tough – I know you know this. You have a problem in the Philippines, and beyond. We have an estimated OFW community of 10 million. If there’s piracy in Somalia, it’s likely a Filipino has been held hostage,” he said.

This May 13, Aquino said, the people have two choices: side with change or stick with the old system.

“This is just my appeal: Let’s speed up the momentum of change in our country because in 2016, perhaps around 11 a.m. of June 30, 2016, we will step down from office. I would like any Filipino to look back, and, together, we’ll say: ‘The Philippines has changed a lot,’” he said.