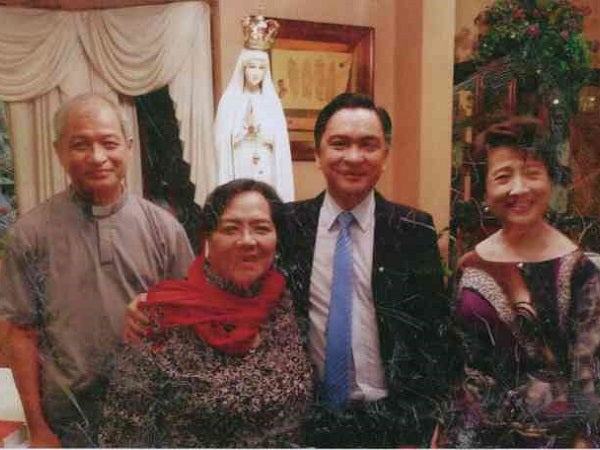 The confraternity of Mary, Mediatrix of All Grace based in St. James the Greater Parish in Ayala Alabang will lead religious groups in a pilgrimage to Lipa, Batangas, on May 1. They will consecrate themselves to Mary.

Bishop Emeritus Teodoro Bacani will give a talk on “Knowledge of Christ.”

Pilgrims may register at 8 a.m. The Chaplet of the Divine Mercy will be recited at 3 p.m. Holy Mass will follow.

A youth arm of the Confraternity of Mary Mediatrix of All Grace, the Kabataang Mediatrix, will be commissioned after the celebration of the Holy Eucharist.

In defense of the Mediatrix

Although the Church has not officially declared the authenticity of the Lipa apparitions in 1948, the devotion to Mary, Mediatrix of All Grace among Filipinos is very strong. Pilgrims continue to attend Masses in Lipa, if not at the Carmelite Chapel, but also in the Parish Church of Our Lady Mediatrix of All Grace, which businessman Danny Dolor built on his land many years ago.

Lawyer Marwil Llasos of the Kapatiran Party, a Mariologist and a Third-Order Dominican, defends the apparitions in Lipa in his blog www.bromarwilnllasos.blogspot. com. In one talk that Llasos gave the Rosary for Life Philippines headed by Betty Roxas Chua, Llasos emphasized that our respect for human life shows our devotion to Mary.

Iling is an impoverished island off the southwestern coast of Mindoro, an hour by pump boat from San Jose, the capital of Occidental Mindoro.

Feb. 11, 2013 marked the inauguration of Santisima Trinidad, a church built on the island for the Missionaries of Mary, Mother of the Poor (MMMP), with the help of private donors led by the DMCI group of companies. The MMMP was founded in 2011 by Fr. Fernando Suarez, the famous healing priest, who was incardinated in Mindoro under Bishop Antonio F. Palang, SVD.

Photograph of the Blessed Virgin Mary

Digital photographs taken by different people using different cameras from different angles have shown an image resembling the Blessed Virgin Mary near an icon of Jesus Christ in the center of the retablo during Mass.

The images of the woman appear to be first standing in homage to her son, Jesus Christ, then at one point, the same image appears to be kneeling at the feet of Jesus, and judging from the different positions, moving across the icon from right to left

Miracles of healing must surely have happened to sick people who were able to touch the reliquary containing the relic of St. Therese of the Child Jesus when it toured the Philippines for four months staring Dec. 15, 2012.

From the Shrine of St. Therese in Pasay City as its first stop, the reliquary was able to visit more than 47 archdioceses and dioceses in the country.

The reliquary is back in the Basilica of the saint in Liseux, France.

The relic exhibit at the National Shrine of the Sacred Heart in Dao St., Makati, is ongoing until November.

The feast of “Tata Husep,” patron of Las Piñas, falls on the first Sunday of May (May 5). Not only people of the town fill the church on his feast, but devotees from other places as well. “Tata Husep” is the affectionate name the townfolk call St. Joseph.

The parish priest, Msgr. Mario Josefino Martinez, will lead the celebration. Novena Masses start on April 26 and end May 4.

A “Santacruzan” will go around the town on May 4, starting at 3 p.m., followed by Holy Mass at 6 p.m. Young maidens dressed as Biblical characters will join. Characters in the Glorious Mystery will be represented by couples.

Fr. Catalino Arevalo, SJ, will delve on the topic, “Mary, Model of Faith,” during the Marian conference on May 4, 1-6 p.m., at the Auditorium of the San Carlos Seminary in Guadalupe, Makati. Organizer is the Pueblo Amante de Maria Mariological Marian Society of the Philippines headed by Lipa Archbishop Ramon Arguelles.

With Mass celebrant Fr. Ramon Bautista, SJ, leading the prayers, the friends and family of my former editor, Tita Llita Logarta, bade her farewell and entrusted her soul to God.

The altar inside the Fr. Patrick Lim Memorial room at La Strada Parish was filled with flowers, her paintings surrounding her remains. Friends sent tall wreaths of flowers to show how much they appreciated Tita Llita. May you rest in peace, Tita Llita.