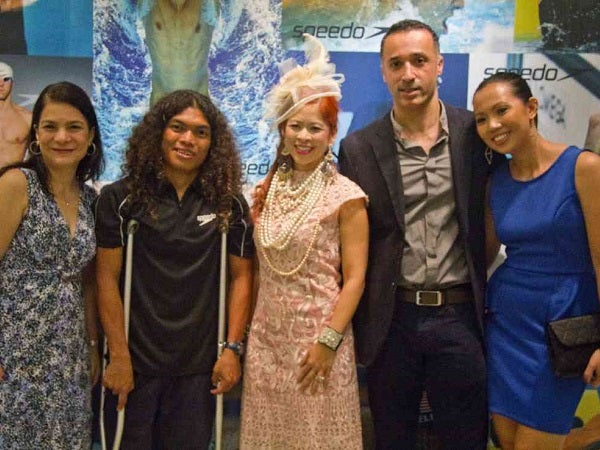 I have my share of pictorials for magazines and such, but recently, my hubby Dennis has been dragged into the cover-shoot game with me. Just last week, we did a joint shoot for the June cover of a sports magazine. He is the newest ambassador of Speedo, so we were both in swim attire.

Speedo is supporting the Philippines’ underwater hockey team for its participation in the World Championships in Hungary this August. Dennis is part of the Men’s Masters Team, and we are both looking forward to seeing this part of Eastern Europe. Of course, I am more interested in the post-tournament trip.

Underwater hockey is the most famous sport you’ve never heard of, and with good reason. From a spectator point of view, all one sees are butts and fins bobbing up and down in the pool. The action is all underwater and away from view.

It’s fantastic that Speedo is so supportive of water sports. At the recent launch of its Spring-Summer 2013 Collection, held right in front of its flagship store on the Bonifacio High Street strip, the crowd was enthralled by the brilliant mix of fashion and function, as Speedo unveiled an assorted product range including multifunctional swimwear, sportswear and accessories.

Speedo’s new Play and Fun collection consists of summer swimwear, perfect for swimming in fashionable and on-trend designs. Speedo’s beach sports staples like board shorts and tankinis and watershorts are all cool and bright.

My son Tyrone, who loves to wakeboard, had some favorite designs with the Speedo Watershorts’ Speedreef Xpress Dry Watershort, equipped with the Xpress Dry technology. With the quick-dry feature, Tyrone can easily dry off after every round of wakeboarding.

Speedo’s wide selection of swimwear from its Competitive Collection returns with a full complement of training suits in bright and vibrant prints. With my personal training for my big Ironman race in Cebu this August, Speedo has specially designed Sea Princess swimsuits in bright, neon colors.

And just before the Speedo pictorial, Dennis and I also had another shoot—this time with master photographer Jun de Leon for his latest book, “No Body is Perfect.” A creative genius, Jun asked Dennis to wear a dive suit while I wore a ball gown. The theme of Jun’s book is fitness at all ages, and I guess we represent that “mature” age bracket. The book will be out in a couple of months.

My hubby grew up in Bacolod City, where his Dad worked for a long time. I’ve had a few chances to visit the city over the years. The first time was when I was still in high school, where I met some of his classmates, and the penultimate trip was for his La Salle high school reunion almost seven years ago.

Last week, I got the chance to revisit the relaxed and laid-back sugar bowl of our country. Negros has been bustling with the new development of North Point, the latest residential and commercial property project of Ayala Land in Talisay City.

The North Point shopping and malling development is called The District, and is immediately north of Bacolod. The District North Point is a shopping center situated within a 215-hectare, fully integrated, master-planned community in Negros, consisting of residential homes, a school, and business and recreational facilities.

Two retail buildings provide a delightful mix of dining establishments and retail shops. The first building is a one-level facility that will be connected to the anchor, Metro Department Store and Supermarket. The second building has two levels that will feature an array of select retail and service concepts.

The District will be home to more than 100 stores, featuring an assortment of favorite local and foreign retail brands. Negrense favorites such as Bob’s, Chicken Deli, Felicia’s, L’Sea, Calea and Terrase Bistro have also found homes in this retail development.

The opening of the mall coincided with the opening of about 60 percent of the retail shops. Metro Department Store head Margaret Gaisano-Ang was among the VIP guests who graced the successful celebration.

I was invited to cut the ribbon for the well-known beauty salon Victor Ortega Salon Premiere. Owner Victor has opened numerous salons in the Visayas area, including branches in Shangri-La Boracay, Marco Polo Cebu and many other stores in Iloilo City and Cebu City.

The salon offers a wide range of services, highlighted by the Signature Rebonding and Signature Milk Treatment. Resident creative director Josh Siglos will be bringing his credentials as the topnotcher of L’Oreal Master Colorist course to Bacolod City via this salon.

Joanna Rodriguez, part owner of the Bacolod franchise, is quite excited with her new business. The salon is located at 2/F, The District North Point, Talisay City.

Watsons has opened a branch at The District as well. I dropped by to say hello to the Watsons executives who flew in for the event. I also became part of the opening of Mags Boutique, with its beautiful endorser Cristine Reyes.

One of the most talented artists living in Bacolod is Charlie Co. He is a gifted artist, sculpture and painter who uses brilliant colors and images to capture the whimsical aspects of life.

Charlie’s spacious studio is just a few blocks away from The District North Point. His latest giant sculptures called “Blue Men in Black Suits” are in his studio, along with enormous artworks in oil.

My Assumption girl friend, Jojo Reyes Ongsiako, and I had a grand time in Bacolod, meeting up with all my hubby’s classmates at L’Fisher Hotel and partying until the wee hours. We had so much fun that I may even bring my hubby along the next time I head back to Bacolod.