‘A genie in disguise, full of wonder and surprise’ Pop’s golden age lives on at the new Merk’s Place | Inquirer Lifestyle ❮ ❯ 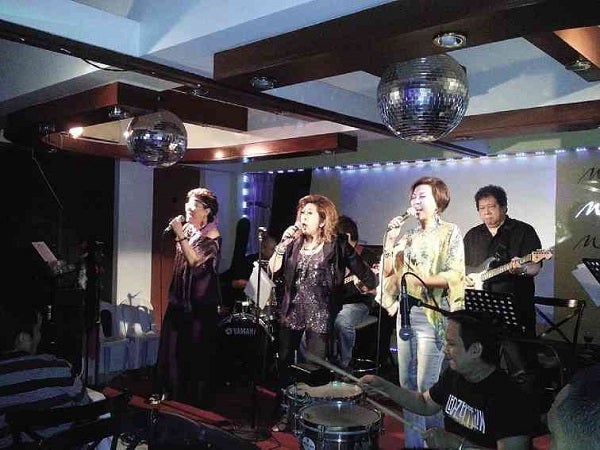 ‘A genie in disguise, full of wonder and surprise’ Pop’s golden age lives on at the new Merk’s Place

We used to scoff at the hit songs of The Stylistics as too mellow until one of our favorite groundbreaking artists, Prince, recorded a cover of “Betcha By Golly, Wow” in 1996. From then on we’ve been trying to see anything pop in a new light.

Two Saturdays ago we were at Merk’s Place, which used to be known as Merk’s Bar & Bistro until it moved to its new location on the second floor, Colbella Arcade, 910 Arnaiz Avenue (formerly Pasay Road), Makati (atop Ralph’s Wines, across Greenbelt Residences).

Magno, Moreno and Castillo had done reunion shows in recent years, mostly with members of another ’70s group, The New Minstrels.

The gig at Merk’s Place opened with Richard Merk and keyboardist Henry Katindig warming up a full-house crowd with favorite jazz standards like “My Funny Valentine.”

Merk was in fine form, his voice revealing a textured edge and restrained power—perhaps a result of having a more mature outlook in life after living hard and fast for too long.

Singer Jeannie Tiongco was next, also with her domestic partner Katindig on keys. A mainstay of the local jazz scene for a good number of years, Tiongco breezed through “Body and Soul” and “Lullaby of Birdland” with ease and grace.

The music was hardly pop at the start, the Divas grooving to Chaka Khan’s “Once You Get Started,” the funk tempo ably provided by the band composed of drummer Mar Dizon, bassist Colby dela Calzada, guitarist Rudy Lozano (another Circus Band original), keyboardist Mel Santos and percussionist Uly Avante.

But the next number, Carly Simon’s “The Right Thing To Do,” set off the nostalgic mood, Magno’s version evoking memories of lazy summers in suburbia. “This is the only song I used to sing solo with Circus,” Magno said of the tune, which was the first track on Simon’s third studio album, “No Secrets” (1972), which also included the hit “You’re So Vain.”

One of Moreno’s solo numbers, “Umagang Kay Ganda,” was rendered in upbeat R&B fashion as the crowd sang along to the chorus. “I’m sorry I had to do the song alone, my partner is not here tonight,” Moreno said, referring to Ray-An Fuentes, with whom she recorded the 1979 Metropop finalist. Fuentes, now a pastor and living in the US, was here last year for the Circus-New Minstrels reunion gig at the Music Museum.

By the time the Divas sang “Betcha By Golly, Wow,” people in the audience, especially Dr. Lacsamana, looked delighted. “These songs make me feel young,” he said, “bringing me back to a particular time and place. I can even smell the atmosphere.”

The song’s lyrics rang loud and clear with back-up vocals from our table: “You’re a genie in disguise/ Full of wonder and surprise…”

The next two tunes featured Castillo on movie themes (“Somewhere in Time”), another ’60s classic (a Latin rock version of The Zombies’ “She’s Not There”), after which Castillo said, “Those were the times,” while doing the act of smoking a joint. “But I just drank then,” she clarified.

The Divas wondered why nobody in the crowd cared enough to dance, as they introduced a Donna Summer medley. A couple stood up and obliged, followed by Virtusio and some of her friends.

More songs followed—a bossa nova medley, and more funk (The Beatles’ “Got To Get You Into My Life”).

But the biggest surprise of the evening was Chad Borja, who was in the audience and was asked to jam onstage. He was quite embarrassed, knowing that the band was quite tired and was not aware that he would sing.

But Merk’s is a jazz club that thrives on spontaneity, and so Borja shyly proceeded to sing a James Ingram hit, “No Easy Way To Break Somebody’s Heart.” It astounded everyone.

The crowd wouldn’t let go of him and asked for one more song. Borja thanked Merk, whom he said was the producer of one of his old albums, and indirectly dedicated his last song to the club owner. It was “Spain” and Borja soared with the band in jazz fusion heaven.

His voice, however, glistened with pop greatness, even as it played along to the song’s scatting calisthenics.