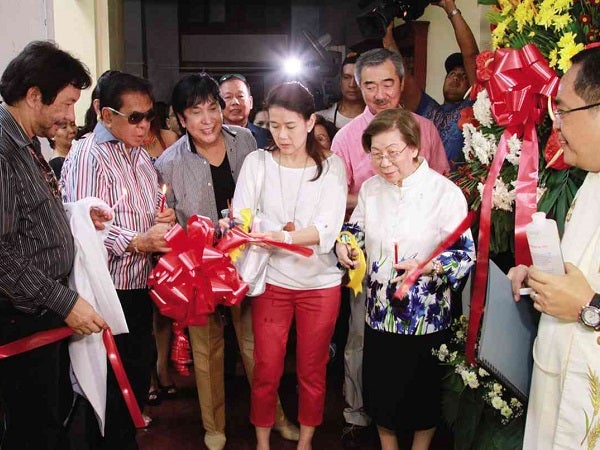 One Sunday, Ilocos Sur Gov. Luis “Chavit” Singson canceled his dinner in Hollywood with actor Steven Seagal to be at The Cancer Institute of the UP Philippine General Hospital. Without missing a beat, he wrote a check for P1 million after seeing the wards.

Meanwhile, oncologist Jorge Ignacio gave up a lucrative offer in the Caribbean to continue his work as chair of the Cancer Institute.

Maria Teresa Gana, wife of Quezon City Mayor Herbert Bautista, pledged to help fix up the plumbing in the public bathroom of the hospital.

These are what philanthropist Ricky Reyes’ friends would do to cultivate their good karma. The Cancer Institute was built in 1931 and was last renovated in 1993 by the late Don Andres Soriano. Since the late ’90s, Reyes has been sprucing up several rooms on the second floor.

For his birthday this year, Reyes treated himself by remodeling seven rooms at the Cancer Institute. The male wards were painted blue and perked up with graphic draperies of bubbles, stripes and waterfalls made of tarpaulin material. The female wards were coated in peach and dressed up with draperies of birds of paradise, roses and tulips.

All the beddings and curtains were done in chocolate brown. Reyes personally purchased ceiling fans and chandeliers.

“These rooms are called Med Onco, through the kindness of Henry Sy and the Ricky Reyes Foundation,” explained Reyes. Although his foundation funded the refurbishment, Reyes wanted to pay homage to the taipan who gave him his big break at the SM malls.

Every time Sy would open a shopping center, he would always ask the leasing department if there was space for a Ricky Reyes salon.

“For a man of his stature, he would ask me, ‘How is business? Are you earning? Do you need money?’ I’d tell him I was surviving. So I put up these new rooms for him. It’s my way of saying thank you and it’s also a birthday gift for my soul.”

The generosity of his friends enabled him to provide the rooms with furnishings and medical supplies. Reyes has been helping the Cancer Institute for over 16 years. He credited Inquirer editor in chief Letty Jimenez-Magsanoc for inviting him to give a pep talk to women undergoing therapy. With scarves and cosmetics, he taught the cancer patients how to look attractive and maintain a positive outlook for their well-being.

“That was a turning point for me,” he recalled. “I realized that if you are healthy, you can work. But what about the cancer patients who are poor?”

In one visit, he saw a child crumpled like a fetus after a chemotherapy session. Then he saw another child screaming while being led to a room for chemotherapy.

“He was being injected in the spine without any anesthesia,” he said.

Reyes asked for a room at the Institute and remodeled it into a playroom for the children to divert them from the agony of chemotherapy. In the past 15 years, he has refurbished the rooms on the second floor, painting them in warm and vibrant colors.

“The hospital was as dreary as a dungeon. There were two doctors, three nurses and no volunteers. Now more volunteers come as they hear about the institute on my TV show,” he said.

Every quarter, he visits Munting Paraiso, the therapeutic ward, to provide milk, dextrose and money for the trust fund, which benefits 500 children annually.

Many schoolchildren have also donated their piggy banks to Munting Paraiso. Friends gave come up to him to offer their services.

His life story has been about a change in fortunes. Reyes remembered growing up in poverty. He had three half-brothers from his mother’s first marriage. He was the eldest of seven children in a new union.

“My father loved my mother so much that she would be beaten up,” he quipped. She would run away from him, but couldn’t find work. They had to move apartments every two or three months since she couldn’t pay the rent.

His older half-brothers would beat up Reyes for being gay.

“In the ’50s and ’60s, men were macho. Then here was a gay brother. I was imprisoned in a chicken coop with fire underneath it. I was hog-tied and hung. Broomsticks would be broken,” recalled Reyes in Tagalog.

Still, he was grateful to them. “I realized that they loved me. They didn’t want me to be ostracized for being gay. At that time, people had conservative views about homosexuality.”

There’s the oft-repeated story about Reyes starting out as a street sweeper in a beauty parlor to pay for his hairdressing classes in a vocational school.

By 1970, he had set up his salon. When Chiqui Hollmann became one of the “Eat Bulaga” emcees in 1979, she needed a new look. Reyes introduced colorful highlights to her hair. “People were scared of color but I came out with red, pink and violet streaks on TV.”

By 1984, Reyes was a household name. “I came out on TV a lot and got a lot of customers. Still, I felt empty. I came to realize that money will never make you happy.”

He formed the Hairdressers and Cosmetologist Association of the Philippines (HACAP), hoping that it would unify the industry. “There was popularity and I was the leader, but I still felt empty,” he said.

When politics led to rifts in the group, Reyes and several hairdressers broke away from HACAP to form Fil-Hair Coop. “I told them, ‘Let us work to help others.’”

One time, speaking to Gen. Gaudencio Tobias of the National Housing Authority, Reyes expressed his desire to do community service by offering free haircuts. Tobias sent them to a resettlement in Dasmariñas, Cavite.

“The people lived in cartons,” Reyes said. “I decided that instead of giving a free haircut, I should teach haircutting and color. That spawned the Hanap-Buhay at Bagong Buhay sa Isang Gunting at Isang Suklay. We have benefited over 130,000 Filipinos with the program.”

During the term of President Fidel Ramos, Reyes helped in Clean and Green, an environmental program led by First Lady Amelita Ramos. His relationship with the Ramoses enabled him to initiate another livelihood project.

“It’s not that you have money, so you do a project. When the program is gone, what happens now? I put up the Helping Hands Foundation so that any Filipino can learn how to be productive any time,” he said.

“I asked from the President’s Social Fund. When FVR approved, I immediately put out the P8 million for the building and equipment so that everything was set up in one month.”

Friends observe that Reyes is fortunate because he helps others to generate their fortune. “They say, ‘No wonder the Lord blesses you.’ To do good is a blessing.”