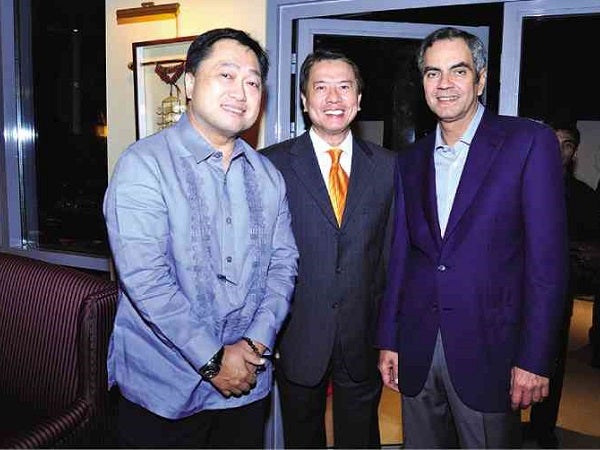 When ‘The Firm’ hosts a gastronomic dinner

Apparently this has been going on for some months now, but so quietly. CVCLAW, the law firm otherwise known among bad-news consumers as “The Firm,” has been hosting gastronomic dinners for its top clients the past months.

The fourth in a series of the Casa Artusi dinners was held some time last month, and this time, after missing the previous ones, we made it. It was one unforgettable evening for both dining and people-watching.

But before we could sit down to dinner, we had a pre-dinner stimulant: watching the Firm’s power clients/guests come in and be welcomed by the Firm’s top man Pancho Villaraza and the evening’s hosts, Augusto A. San Pedro Jr. and Franchette Acosta, senior and junior partners, respectively.

The Rainmaker’s Lounge, the Firm’s exclusive dining restaurant on a top floor at the CVCLAW building, had tables decked with fresh fruits and flowers as centerpieces, with Venetian masks thrown in to complete the Renaissance theme.

In introducing the courses, Margarita said the series of Artusi dinners at the Firm was just a glimpse of what Casa Artusi culinary school, newly opened in the country, could offer.

Margarita owes her dynamic culinary career to Casa Artusi, where she trained, and whose culinary philosophy and authentic Italian cooking she follows to this day—fresh ingredients and a cooking method that brings out, not smothers, the freshness and flavors of each ingredient.

The dishes she prepared that night, like in previous Artusi dinners, were from the iconic Artusi culinary book, which contains more than 700 recipes—an Italian homemaker’s bible. So while this was already the fourth in a series of dinners, Margarita said she still has a long way to go, if she was to do even an eighth of the book’s content.

Then there was a dessert plate of Turin cake, marron glace, and almond milk gelato prepared by Amanda Tengco, daughter of Al and Carla.

No matter that the menu was two pages, the dinner wasn’t really satiating. The servings, like I said, were so small and the flavors so evident enough for you to relish but never overpowering. The meats were fresh and juicy.

It’s no wonder that these Artusi dinners by The Firm have become much anticipated, then talked about, albeit discreetly.

This dinner had the Renaissance theme. We heard that the next Artusi dinner to be hosted by The Firm will carry “The Godfather” theme.

Now, that will really be some mafiosi-watching.