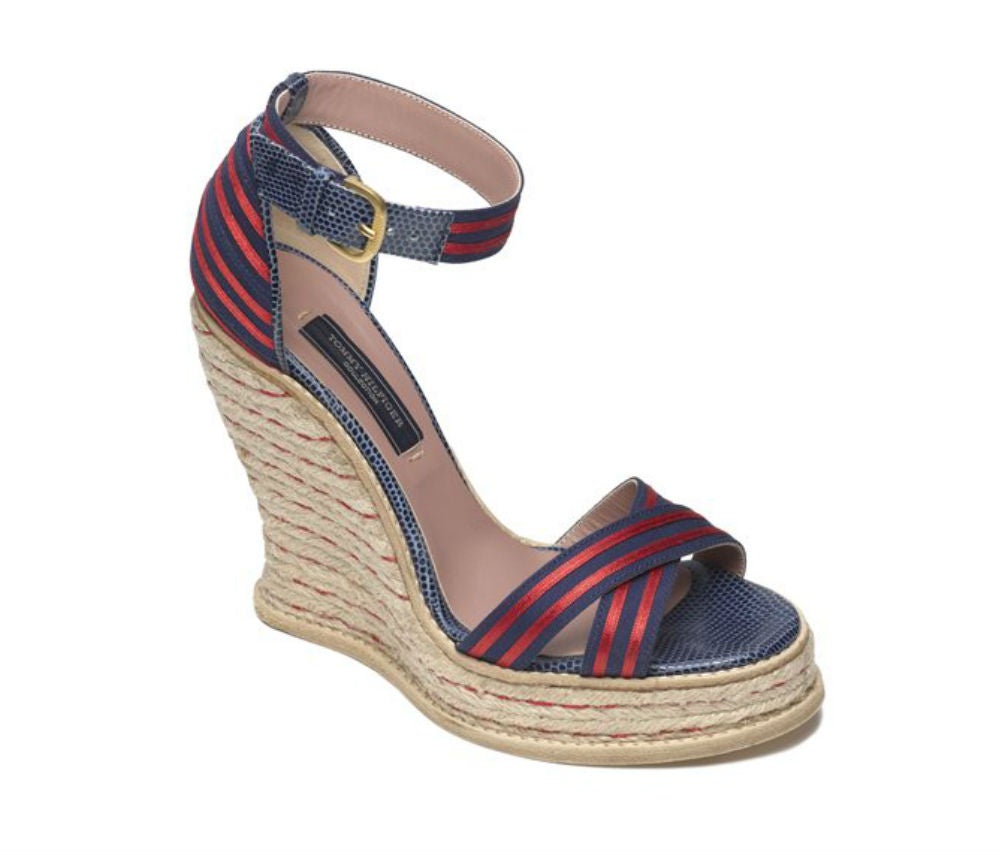 This product image released by Tommy Hilfiger shows a red and blue striped espadrille wedge. The rope-soled shoes have long been a staple of the fair-weather seasons, no matter if there's a chill in the air or the sidewalks are steaming. It's all good as long as the sun is shining. AP Photo/Tommy Hilfiger

NEW YORK—If you’re craving a little more summer in your springtime wardrobe and you’re hesitant to break out the white pants (it’s OK, but that’s another conversation), try espadrilles.

The rope-soled shoes have long been a staple of the fair-weather seasons, no matter if there’s a chill in the air or the sidewalks are steaming. It’s all good as long as the sun is shining.

“The espadrille for spring is like the riding boot in the fall,” says Elisa Miller, creative director of the beachy brand Calypso St. Barth. “It’s a rite of the season.”

Style options have increased exponentially as designers take liberties with the definition — and have gotten a little smarter about their construction. Flat versions, wedge versions, sandals, slides and gladiator lace-up styles are some of the choices of a shoe with humble roots that was made fashionable in France and Spain in the mid-20th century.

“I’d call anything with the jute sole an espadrille,” says Miller. “You could have any fabric for the top — canvas, leather — it could be plastic, but you have to have the jute. That’s what defines it.”

Luckily for wearers, especially those who have been caught in the rain, many espadrilles now have a bottom layer of rubber, too.

You can’t really say they’re a “trend” because they’re pretty much an annual tradition, says Tracey Lomrantz Lester, women’s editorial director at Gilt, but she agrees this season marks a rebirth. They elevate an outfit without ever looking “too done,” she says.

And, they’re fun, says Tana Ward, senior vice president and chief merchandising officer for American Eagle. They can bring graphic prints and bright colors to an outfit without a major commitment, she says.

Lucky’s Morgan sees them as a more fashionable alternative to flip-flops. They can go to the beach or to dinner, prices tend to be affordable — or at least less expensive when you are talking Valentino — and the nautical vibe keeps things relaxed and summery.

As a vacation shoe, it’s ideal, she adds. “You’re probably already wearing them so you don’t have to pack any shoes.”

Espadrilles are instantly transporting, agrees Lester. To her, they evoke Brigitte Bardot on the French Riviera, an inspiring image even if you’re headed to the office or running errands, she says. Just throw on a striped bateau-neck top and white jeans — and voila!

Calypso’s Miller says a white linen shirt with jeans and silver espadrilles are a favorite look of hers, but they offer a lot of flexibility, complementing shorts, skirts and pants with all sorts of hemlines and silhouettes. That helps them live through other fads and fashions.

For them to last that long, though, Miller suggests using fabric or leather protector on the uppers, and glue on the rubber bottom if it starts to separate from the jute.

Still, Morgan likes to refresh her closet with a new pair. “So they’re not hearty shoes, but that’s part of the appeal. They’re casual, they’re go-to, they’re beachy. There’s a huge variety, but the message is the same: It’s time to relax and be in the sun.”