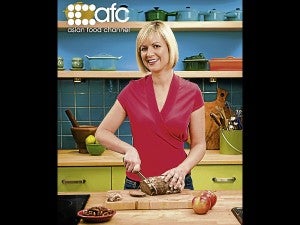 When she returns home to Canada after a whirlwind tour of Asian cities, luscious golden peaches will be in season, says chef Anna Olson over lunch at Edsa Shangri-la’s Summer Palace.

As host of the cooking show “Fresh with Anna Olson,” she is well aware of the seasonality of produce in a country where the four seasons are well delineated. Tomatoes, for instance, are at their best in summer. They’re practically complete unto themselves and can be served without having to do much to them, she said.

Asparagus, on the other hand, is available only for a few weeks a year, while strawberries and rhubarb are the first to appear in the summer. Such transitions, she says, makes her appreciate freshness more.

“Our (food) cravings go with the seasons,” she says. And while in the fall, the air is filled with smoky flavors, spring smells of greens and summer’s fragrance are of flowers and grass.

Likewise outdoor barbecues and easy cooking give way to the richer, deeper flavors of roasts and slow-cooked foods once the cold winter months set in.

Olson was in Manila as one of the judges in the Asian Food Channel’s search for the next celebrity chef. A celebrity chef herself, she stars not only in “Fresh” but also in “Sugar,” cooking shows that are both aired in AFC. She has written six cookbooks, including “Sugar,” “Another Cup of Sugar,” “In the Kitchen with Anna,” and one which she co-wrote with her husband Michael, (himself an accomplished chef), titled “Anna and Michael Olson Cook at Home.”

As a professionally trained pastry chef, she has had over 15 years experience in the culinary field, during which time she once worked in a winery restaurant in the midst of Niagara’s wine country, endorsed products ranging from Splenda to Starbucks, and owned a bakery selling freshly made pastries, cheese, deli meats, breads and salads.

To add to her own personal knowledge, she has studied nutrition and is doing research on food science.

From banking to cooking

Not that she has always aimed to be a chef. With a degree in political studies and sociology from Queen’s University in Kingston, Ontario, she spent a few years working in a bank.

During a particularly stressful time, however, she found herself staying up at night to bake banana muffins.

“I realized then that that is what makes me happy,” she recalls.

She quit her job soon afterwards and enrolled in the culinary program of Johnson & Wales University in Denver. After graduation, she travelled across the US and finally settled in Canada’s Niagara region.

Despite being a celebrity, Anna says she doesn’t really feel like one. “It’s not like one day I woke up and felt different.”

She recalls that when she did the first season of “Sugar,” the director did tell her that from then on things will be different, that there will be some stuff that could drive her crazy but that she should just let them all roll off her back.

These days, Anna gives a similar advice to chefs: “They should just focus on what they’re doing and let the rest roll off their backs.”

During the auditions she conducted in Manila together with E & O’s director for Group Hospitality and Lifestyle Michael Saxon and chef Bruce Lim, one of her criteria was the contestants’ ability to express themselves.

“They should be able to cook and talk at the same time,” she says. She was most impressed by the caliber of the contestants as well as by their confidence and passion.

But beyond the camera, chefs, she believes, should possess certain qualities to be successful.

“They should have common sense and that’s something you can’t teach,” she says. “They should have their wits about them and should be able to make decisions quickly. They should also recognize when to add something and when to stop, or when to just leave a dish alone.” Just as important, she believes, are communication and business skills.

While she thinks chefs are made, Michael contends that chefs are born.

“They need to have problem-solving skills, be adaptable, and have a willingness to share. The days of secrecy are over. You can’t withhold information any more, what with the Internet and all,” he adds.

In Canada, he says, the trend now is toward simplification, with sizes being reduced and prices of meals dropping.

But since quality still has to be maintained, many chefs aim for innovations on everyday dishes. Hamburgers, for instance, are now the big thing in Toronto, but the burgers are enhanced by, for instance, adding short ribs to the beef.

“A lot of small places make their own ham and there’s more usage of farm produce. It’s okay nowadays not to use foie gras and truffle oil, and instead to just serve something basic like cream of celery soup.”

Such simplifications pose a challenge to chefs because then they can’t hide behind the costly ingredients. Using more basic ingredients, they have to be sure they do the dish properly.

Aside from the seasons, Anna says she also derives inspiration from her grandmother, who made desserts every single day. When developing recipes, she does research and writes descriptions of the ingredients, and that spurs her to action. Travel, too, gives her plenty of ideas.

While in the Philippines, she and Michael enjoyed local dishes such as kare-kare, garlic rice, chicken inasal and pastillas.

Not that it’s all so easy. Anna says when she has to taste the dishes she’s creating, she treats it as work.

“I’m not savoring the food, I’m more of analyzing it.”

Still, she and Michael find that there’s so much fulfillment in their careers. When he was working in a restaurant, Michael recalls, he would sometimes peek from the tiny glass window of the kitchen to see how the customers are enjoying their meal. When he sees them happy, “it’s so humbling,” knowing he helped create their joy.

“It’s not just the food that you’re bringing to the table,” Anna says. “You’re also bringing people together.”