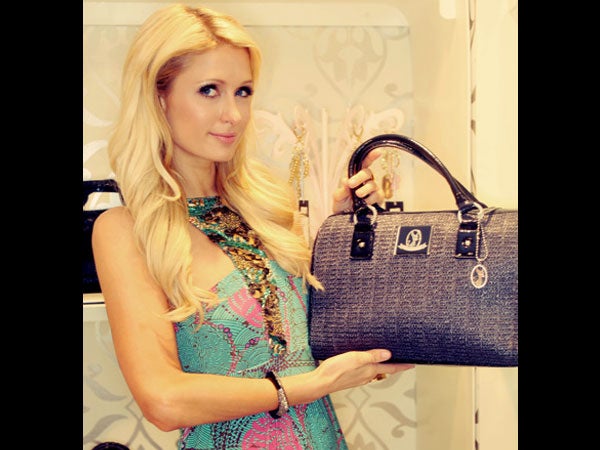 On the second day of her Manila trip, Paris Hilton, heiress, businesswoman and reality TV show star, posted this on Twitter:

“Love my stylist here @Bea_Constantino. She is putting me in the most beautiful dresses. Loving all the Filipino designers, so talented!”

She was talking about Martin Bautista, Eric de los Santos and Rosanna Ocampo, whose creations were handpicked by Constantino for Hilton. Hilton wore the clothes at commercial and photo shoots for Century Properties, the real-estate firm that brought Paris in to design the Beach Club for Azure, the beachfront residential property the company is developing in Parañaque.

“Love this dress!” Paris tweeted about one of De los Santos’ creations.

Paris is said to have loved the designs for her so much that she asked if she could bring them home.

Hilton was seen wearing the designers dresses in the behind-the-scenes footage of her commercial and photo shoot, which was shown at her Century Properties press conference at Manila Peninsula’s Conservatory.

At the press conference, Hilton wore a dress by Joel Escober with four-inch beige Louboutins.

“I’ve been having a wonderful time. Everyone’s so welcoming and wonderful,” she said.

“Ms Paris Hilton’s creativity was very evident in the photo and the video shoots. She interacted with the Century Properties creative team and lent her inputs in the scripts and layouts. Everyone can expect that the new Azure campaign as well as Century Properties Azure Beach Club will have Paris’ indelible touch.”

Hilton said, “The Beach Club is gonna be very Paris—sexy, fun, exciting, beautiful. Of course there’s going to be pink there, it’s my favorite color.”

Hilton also opened her handbag and accessories store at SM Megamall on Thursday.

“I love designing, I have 17 different product lines to my name. I’ve been doing it for 15 years. I’m just gonna continue growing my empire. I also want to get married and have children but for now I will focus on my business,” she said.

On Tuesday night, she attended a dinner party thrown in her honor by boxing champ Rep. Manny Pacquiao.

Among those in attendance at the party were Dr. Vicky Belo and her daughter Cristalle. Belo, who described Hilton as “charming and friendly and nice,” said the first thing the heiress noticed was the perfume she was wearing.

“It was Hayden green tea and peony cologne. I told her I heard she had a very successful fragrance line. She was happy to tell me she was launching her 12th fragrance.”

Belo’s daughter Cristalle also had a chance to spend time with Hilton.

“Just like Paris’ scent Siren, she is sweet, sexy and sassy. We share a love for animals. I thought having five dogs, two chickens and lots of fish was a big deal, until Paris told me she has 40 pets and an in-house zoo keeper who takes care of the animals.”

During her five-day trip, Hilton also made sure she had time to meet her fans.

“I love my fans so much, they mean the world to me. It’s so special to be here.”