Your online right to vote Twitter, Facebook and blogs have evolved from mere pastimes to actual tools to reach a wider audience faster.  Social media have insinuated themselves into our lives, with tweets and blog entries becoming hot topics of conversation along with current events, politics and show biz.

It was only a matter of time before recognition was given to Manila’s most-read online personalities, and last Tuesday evening, Globe Tattoo’s first ever Tatt Awards finalists were introduced.

There are 10 categories with five finalists per category and it’s now your turn to choose your favorites among the list as public voting opened last August 10 to continue until midnight of the 24th. 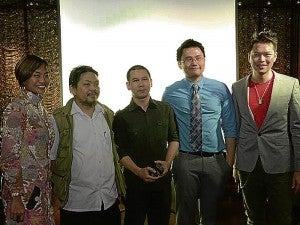 Each of the categories relate to a particular branch of the ’net, like the nominees of Word Slayer, whose witty entries have garnered a following among the online masses.  Nominees of the Word Slayer award are Loi Reyes Landicho (professionalheckler.com), Inquirer’s own Gibbs Cadiz (gibbscadiz.com), Lori Baltazar (dessertcomesfirst.com), Von Bryan Cuerpo (ficklecattle.blogspot.com) and Juned Sonido (baratillo.net).

Other categories include Video Slinger for the viral video makers, The Artiste for the visual netizens, The Advocate for those who use social media to further causes they are passionate about, Ball Breakers for their bold, unapologetic opinions, The Indie Rocker, Tech Junkie, Stylismo, and The One.

Voting for your chosen nominees requires a Facebook account where votes will be recorded via the Tatt Awards portal on Facebook.   Winners will be announced on August 26, where cash and other premium prizes await the victorious.