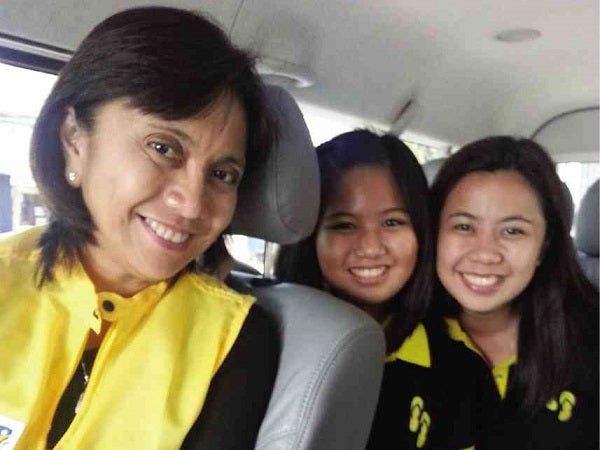 Except for the wave of her hand that was still rather demure, there was nothing about Leni Robredo to suggest that she wasn’t used to crowds. Getting off the van that took her to the campaign rally that Friday in Calabanga, Camarines Sur, she waded right straight into the crowd, greeted people and graciously posed with some for pictures.

Though this is her first candidacy, the widow of Jesse Robredo, who’s running for Congress in the third district of Camarines Sur against an entrenched political dynasty, didn’t seem diffident. With firmness and candor, she delivered her speech before a huge attentive crowd, with President Aquino onstage, along with Local Government Secretary Mar Roxas, who succeeded her husband.

Unlike most political candidates, she didn’t have to sing or dance to hold the crowd captive; she merely had to speak.

“We don’t have the logistics for big rallies,” she tells us, with this one held two Fridays ago being an exception because the President was attending and speaking in it. “We do small groups and go straight to the people, not only their leaders.”

She filed her candidacy on the day of deadline itself last Oct. 5, and since then, she’s worked assiduously to cover the constituency—Naga and seven municipalities, broken down into 186 barangays, or more than 200,000 voting population.

She’s reached all of them, starting her day at five in the morning, going from house to house, retreating into meetings at 10 a.m. so she and her group are not under the punishing noonday sun (one or two other candidates have succumbed to heat stroke), then resuming the outdoor campaign in the afternoon and into the night. She does eight to 10 caucuses at night, way past into midnight.

But then, after Cory Aquino, the Philippines—with the world at large—is no longer surprised by widows who step into the shoes of their husbands and end up living the destiny their husbands abruptly missed.

Maria Leonor “Leni” Robredo, now 48, was thrust onto the national stage when her husband Jesse died August last year. His plane crashed in the sea off Masbate. He was only 54. He was the Interior and Local Government secretary whom Aquino appointed in 2010 at the start of his administration. Jesse, Naga’s mayor for 19 years, gained notice for his people-centric governance.

However, it wasn’t until his death that the country fully appreciated the man and the “non-trapo” leadership he stood for. It was only in the tributes at his wake that the country realized the honesty and refreshing simplicity he brought into his position of power.

“A trustworthy and efficient leader,” Aquino described his Cabinet member in the eulogy. His came to be distinguished as the “tsinelas leadership”—a graphic term to describe how he went around town, serving his community, in slippers, astride his bike.

The country got curious: Who was the woman Jesse Robredo left behind?

Leni Gerona Robredo is a lawyer who, until her candidacy, focused on cases involving women and children. Their plight has been her advocacy. Her father, Antonio, was a longtime judge in Naga, where her family hails. (Her siblings are now based abroad.)

Before Jesse’s death, she had a pending application to be a Regional Trial Court judge. She strikes us as an independent woman who’s now both father and mother to the Robredo girls—Aika, 25, now working in government; Patricia, 18, a student whose major is health science; Jillian, 13, who will be a high-school sophomore this schoolyear.

Leni takes Aika and Jillian with her on the campaign trail (Patricia is in school), with Aika sitting in for her in some political meetings. The family stays close even as Leni goes through a hectic campaign schedule. She fulfills her motherly duties even as she undergoes what she now calls her “somersaults in life.”

She recalls to us how her daughters turned emotional, “hysterical” even, when she told them of her last-minute decision to run for Congress.

Almost like people power, the province’s political leaders converged in her house in Naga to try to prevail on her to run, arguing that that was the only way to keep the Liberal Party in Camarines Sur from breaking up since the Party’s two candidates were bound to run against each other, thus weakening their chances against the province’s entrenched political dynasty.

“It was a leap of faith,” she describes her decision to run. “But when I started going around to campaign, I realized I did the right thing.  Ang iniwan ng asawa ko ay hindi lang tao, but also lessons in good governance, and that, I can continue.”

Contrary to what was perhaps an initial notion, it wasn’t Aquino or the Liberal Party at the national level that talked her into a congressional candidacy; it was the political leaders in her province.

And what would she bring to Congress?

“To translate into legislation the department-level policies started by Jesse covering LGUs (local government units)—such as the seal of good housekeeping, the incentives for good performance—so that LGUs will be forced to excel,” she says.

“It’s not enough to be a good man; there has to be a system that would ensure the good to thrive.”

She realizes that she could make a difference beyond Naga.

“I didn’t think I could do it, speak before so many people,” she says. But she can. “It’s either he’s guiding me or I’ve learned a lot from him.”

At the onset, her campaign has been running on hundreds and hundreds of volunteers and donations.

“I don’t pay anyone,” she says, and her volunteers are mostly the young.

“If I win, that would be imparting good lessons in politics.”

The latest surveys show her leading her opponent by a very wide margin.

The Robredos celebrated their 25th wedding anniversary last June, two months before the plane crash. It’s not been a year since her husband’s death; the family’s grieving is far from over.

“Yet,” she now says, “I’m comforted somehow by the thought that I’m trying to continue what he did. It’s as if he’s still here. The same people who helped him are helping me.

“People are ready for a new brand of politics.”

She has faith in the people’s desire for transformative governance, even as she notes that vote-buying is a practice that will not go away any time soon.

It’s apparent how Leni and her small family have kept a simple lifestyle. To visit her daughter in Manila, she and her two other daughters take the eight-hour bus ride from Naga. On our way to the airport, they settle for a fried siopao takeout to feed her small van entourage.

She says that while Jesse believed in the power of symbols to convey his vision of governance to his constituents—such as riding on regular bikes and wearing tsinelas—he also spoke repeatedly about his mistrust of power.

“He always reminded us about the need to keep everything in check,” she says. “If you start enjoying power, he said, hahanap-hanapin mo ’yan (you’ll keep yearning for it).”

Yet, one feels that the widow is getting the hang of the political campaign. She says, quite pragmatically, “Yun yata ang sakit ng pulitiko. ’Pag may tao, nawawala ang pagod. (That’s the balm of politics—when you’re around people, your exhaustion dissipates.)”