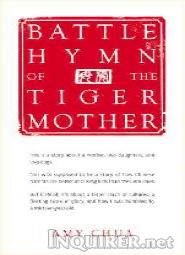 The Wall Street Journal really did string together her book’s most shocking parts, resulting in a worldwide controversy about Chua’s extreme parenting style.

That article, which was given the title “Why Chinese mothers are superior,” spawned even more articles, features, blog posts, comments and even death threats made against Chua, a law professor at Yale and the daughter of Chinese immigrant parents who had spent a chunk of their lives living in the Philippines.

The controversy may have died down but the spotlight remains on Chua. Time recently included her on its list of 100 most influential people of 2011 and the magazine’s issue included photos of her posing with two tigers in her daughter Lulu’s bedroom.

“Battle Hymn of the Tiger Mother” finally hit our bookstore shelves and readers may be surprised to realize that the rest of the book is actually pretty tame—screaming matches notwithstanding.

It cannot be denied—Chua can be high-strung, obsessive and manipulative, but she also isn’t the monster people who had not even picked up the book were making her out to be. But this doesn’t mean she’s a model parent either.

For one to be able to appreciate Chua’s book, one must remember that it was written as a memoir and not a how-to. It is not a manual for parenting—it is the story of one mother’s journey with her two very different daughters and her overzealous attempt at helping them attain perfection.

The book devotes most of its pages to Chua’s desire for her daughters Sophia and Lulu to become accomplished musicians, forcing them to practice playing the piano and violin for hours and hours every day, even during family vacations, signing them up with renowned teachers without asking for their opinion and threatening to take away possessions and privileges when they refused to give their musical instruments as much dedication as their mother demanded.

“Battle Hymn” is an easy read—you can zip through it in one night (if you don’t stop too many times to roll your eyes at Chua’s propensity for stereotypes and making sweeping generalizations). And, even if you don’t agree with Chua’s motherhood techniques, you might still find it entertaining. For a lot of parents, it is the difference between them and Chua that made the book such a riveting read.

In the end, you will walk away not with admiration for Chua’s parenting skills—but with the realization that parents have a lot to learn from their children.

Chua mentioned in the book that she had to take out a lot of the parts she had originally written about her husband Jed Rubenfeld, also a Yale law professor and author. Right now he’s sticking to thrillers but you never know—maybe one day he’ll decide to write his version of his family’s story. Now that’s a book we’d like to read.

“Battle Hymn of the Tiger Mother” is now available at National Book Store.