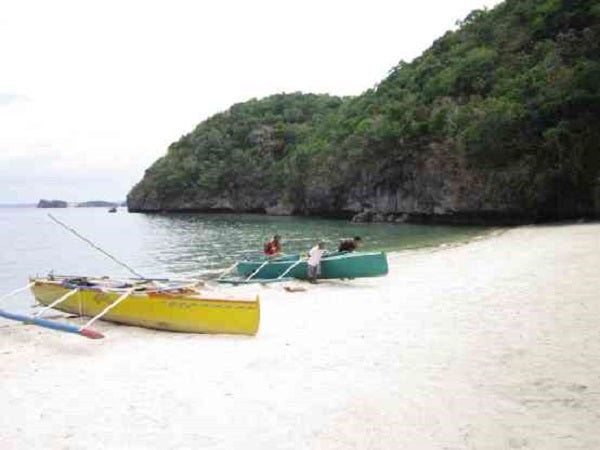 ARRIVING at one of the Hundred Islands

The top tourist attractions in Pangasinan are religious, the miraculous Our Lady of Manaoag Shrine, for instance, and “secular,” like the Hundred Islands National Park, which the Philippine Tourism Authority has turned over administratively to the City of Alaminos headed by Mayor Hernani A. Braganza.

We were in Alaminos—182 kilometers north of Manila—recently for the San José Gali-la Festival. “Gali-la” is a Pangasinense term roughly translated as “come join us. St. Joseph is the patron saint of the city. The imposing parish church is named after Jesus’ father on earth, and around the church and plaza you still see a number of well-preserved ancestral homes.

A highlight of the festival was an Alaminos longganisa (native sausages) eating competition. These are said to be all-natural with no preservatives, and always come with two sticks (instead of the usual cord) which hold the sausage in place. “Alaminos longganisa is one of the best ever,” boasted the master of ceremonies, City Tourism Officer Miguel L. Sison.

The competition was for men and women, one group after the other. There was a medical team around to take the blood pressure of the contestants, if need be. “If you have high blood (hypertension), don’t join,” warned Sison.

Lots were drawn and those with a number were qualified to join. Ladies first, then the men. Styrofoam plates with longganisa and rice were placed before the phalanx and, at a signal, the panic eating began, amidst much merriment, encouragement and picture-taking.

Soon hands were raised; the first three to finish in each group were given cash prizes (P3,000 down).

If you’re in Alaminos, what do you do? Of course, you visit the Hundred Islands in Barangay Lucap (Tel. 075-5512505/ 5527406), and never mind if you have toured the islands before. These remain a beauty (except for one island, a portion of which has apparently eroded), with dazzling white sand, limestone cliffs, vegetation (brown in parts due to summer), caves, and private beach coves accessible through motor boats where you can swim, snorkel, bring food and drinks, and just laze around and enjoy the natural scenery.

“Look, the sand here is more powdery than in Boracay where thousands of feet tread,” observed coordinator Bernard Supetran.

The highest point in the immediate vicinity is at the top of Governor’s Island, which you reach through spiral stone steps. We ascended these, and in a few minutes I was huffing and puffing, because of old age. “Up there is the best view of the islands,” Bernard said encouragingly. Thanks a lot.

But he was right. At the summit, a grand view of the many islands unfolds before you. Everyone just clicks and clicks away, including, of course, the obligatory souvenir shots.

To paraphrase that old song by Bing Crosby, it was lovelier encountering the Hundred Islands the third time around.