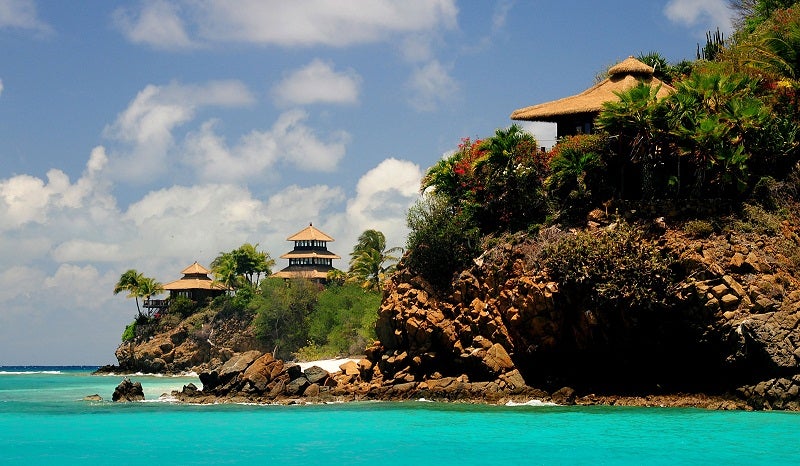 Buildings line the shore of Necker Island in the British Virgin Islands, Friday, May 17, 2013. Richard Branson, the adventuring CEO and founder of the Virgin Group of companies is co-hosting a two-day meeting at Necker Island, his home in the British Virgin Islands, where he has developed an ultra-exclusive eco-resort that showcases renewable energy technology, reintroduced flamingoes, imported lemurs and other creatures. AP Photo

NECKER ISLAND, British Virgin Islands— Surrounded by a turquoise sea and a menagerie of exotic animals on a billionaire’s private island, political and business leaders gathered Friday to back an initiative aimed at expanding protection for the Caribbean’s imperiled coasts and waters.

The “Caribbean Challenge” calls for special protected zones along at least 20 percent of the region’s coasts by 2020 in hopes of protecting its biodiversity and its crucial tourism market. The region’s scattered islands have 10 percent of the world’s coral reefs and some 1,400 species of fish and marine mammals.

Richard Branson, the adventuring CEO and founder of the Virgin Group of companies, is co-hosting the two-day meeting at Necker Island, his home in the British Virgin Islands where he has developed an ultra-exclusive eco-resort that showcases renewable energy technology, reintroduced flamingoes, imported lemurs and other creatures.

“It’s just so important to get every single Caribbean country 100 percent behind protecting the wonderful sea life and the wonderful reefs and mangroves, and therefore the species that occupy our oceans,” Branson said from his 74-acre Caribbean retreat, a haven for entertainment and business A-listers.

“This is not a situation where we can say: This is a Caribbean thing and it doesn’t include anybody else. This is an international issue,” Mitchell told reporters gathered for a brief press conference held on Necker’s tennis courts, not far from an animated group of lemurs.

On Friday, delegations from the participating governments signed a communique pledging to establish a framework for a regional approach to coastal conservation, including “increasing considerably the number of marine protected areas.” They also said they recognized an urgent need to protect sharks and rays, and vowed a “dramatic acceleration in the transition from fossil fuels to alternative energy sources over the next five years.”

One of the key sponsors is the Virginia-based Nature Conservancy, which touts the Caribbean Challenge, begun in 2008, as one of the world’s most ambitious conservation initiatives. The conservation group has been providing technical expertise to the participating islands for years.

“The Caribbean is truly paradise under threat, and today’s focus is a critical step toward a brighter future,” Glenn Prickett, chief external affairs officer with the Nature Conservancy, said in an email.

If the Caribbean, the world’s most tourism dependent region, takes strong steps now to protect its natural resources, conservationists say it will be in a far stronger position to protect its small economies and cope with future threats from climate change and ocean acidification due to greenhouse gases.

The challenges are many in the ecologically stressed Caribbean, which covers some 10,000 square kilometers (3,860 square miles). Once brilliant coral reefs have lost their luster due to warming waters and disease. Live coral cover of regional reefs has plummeted to an average of just 8 percent from 50 percent in the 1970s, the International Union for Conservation of Nature says. Many reefs have been degraded by overfishing, runoff pollution and coastal development.

The Dominican Republic has actually exceeded its 20 percent goal by creating more than 30 new protected areas in recent years. The Bahamas established the largest marine protected area in the region by expanding a national park in Andros from 185,000 acres to 1.28 million acres. Heavily overfished Jamaica has set up several “no-take” fishing sanctuaries and fishermen say they are seeing improvements.

The initiative is modeled after similar conservation financing efforts in the Pacific and linked to the Caribbean Biodiversity Fund, a sustainable finance mechanism that will generate funding. The initial endowment capitalization target of $40 million has been reached, according to the Nature Conservancy.

But there are questions about how deep the political will really is in a region with heavily indebted governments. Political leaders have long spoken about the need for protecting coasts, developing alternative energy sources and diversifying tourism-dependent economies but little has been accomplished. One country, Antigua & Barbuda, recently dropped out of the initiative for reasons that are not clear.

Grenada’s prime minister believes that now is the time for the Caribbean region to come together and tackle shared environmental threats. More countries and territories are being encouraged to join the compact.

“The political divide in our region is very deep but this is one issue where all nations are on the same side,” Mitchell said.