The world’s best wines can be found in a Filipino-owned vineyard | Lifestyle.INQ ❮ ❯ 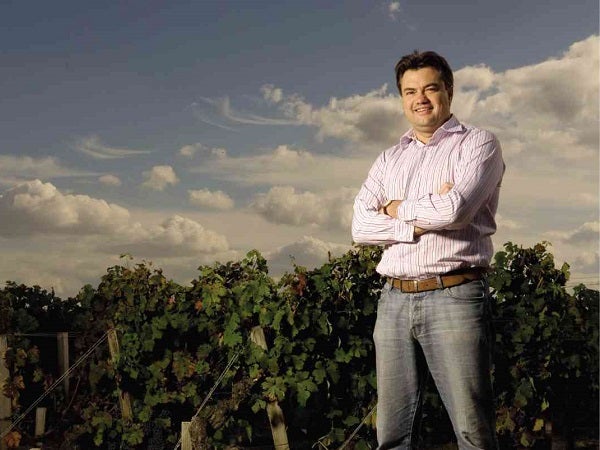 In Southwest France, there’s a Filipino-owned vineyard which carries some of the world’s best wines. With a Philippine banner hoisted outside, this estate has been visited by the likes of former President Gloria Arroyo, former Cabinet member Vince Perez and banker Aurelio Montinola III.

Located in the wine epicenter of the Bordeaux region, Chateau Siran is run by winemaker and businessman Edouard Miailhe (pronounced mee-EYE). For several generations, the Miailhes ran a trading company in Manila. Today, the younger Miailhe shuttles between the Philippines and France to look after the family business.

“My father traded less in the Philippines but he kept our real estates in Binondo, Escolta and Santa Ana that were left over from the 19th century,” he says.

A fifth-generation vine grower, Miailhe took over Chateau Siran, which was acquired by his family in 1859. Chateau Siran lies in the town of Labarde in the Margaux Appellation. To the wine uninitiated, he explains, “An appellation is a piece of land which answers to certain characteristics in soil, climate and type of grapes,” says Miailhe. In the Margaux Appellation, the soil is embedded with silica and white gravels from the mountains transported from the river. The wines from this region are known for their delicate flavors.

The 88-hectare estate includes 36 hectares of vineyards which are open to the public. Visitors come to sample and buy the Margaux wines.

“When you walk around, you see the various grapes; the ages of the vines; the way we plant, grow and prune; the canopy management on how to manage the leaves and the grapes. What you see will depend on the season of your visit. The growing season is from April to October. From November to April, we prune the vines. In April, the buds start to come out,” he says.

The vineyard cultivates the grape varieties of Cabernet Sauvignon, Merlot and Cabernet Franc.

Petit-Verdot, a variety of red wine grapes, adds color and spices up the wines. Its main products are Chateau Siran which is famous for its “perfect balance of tannins, fruit and sharpness”; S de Siran, the second wine, which is noted for its roundness; and the sweet Saint-Jacques de Siran.

As Vice Maître (second master) of La Commanderie de Bordeaux Manila, Miailhe invites Filipino friends over to his chateau and entertains them.

Chateau Siran offers a modern cellar, a tasting room and a large hall, both of which can be rented out for special events. To get a sweeping view of the estate, there is a terrace that overlooks the vineyards. The nuclear bunker is host to the vintages, the oldest of which dates to 1870.

Unique to Bordeaux is the Future Sales which runs from April 15 to June 15, before the Vinexpo or wine exposition. It is the ultimate preselling event for wines before they are bottled. The wines are priced according to what the market is willing to dole out.

“When you are part of the 150 most famous brands in the world, you sell your wines in the future. You sell even if they are still in the barrels for aging. If the grapes have been harvested in October 2012, they are stored in the barrel in January 2013 for 12 months. By January 2014, I remove them, put the wines in the tank, clarify them and bottle them. The wines are sold through the wine selling system, the Bordeaux Negociants,” explains Miailhe. Negociants is a group of wholesalers who contract to buy an allotment of an estate’s harvest every year.

In April, the world’s most prominent wine writers come to Bordeaux to rate the wines. “Depending on the ratings and the market, you release the wine. You will allocate the wines to the different buyers. We have 45 buyers—some take 800 cases, some 10 or 20 cases.  In two days, you release the wines for the same price and same payment conditions. This is what the buyers have to pay for what will be allocated to them. The buyers confirm and pay in six months. The wine is delivered at the end of the year,” explains Miailhe.

Most visitors stay at the charming hotels in Bordeaux City. Still there’s Chalet Siran, a cottage good for six, in the estate. Guests can dine at Miailhe’s restaurant La Gare Gourmande, a former 50-square-meter train depot in the village. Consisting of seven tables, it serves traditional French fare including poultry, magret confit and pork from the Southwest which complement the red wines.

“Many customers are winemakers who bring their own wines,” he says. The Trip Advisor described La Gare Gourmande as the best-kept secret in Bordeaux, and gave the meal of cold pasta with salmon, roast quail with vegetables, and a warm apple strude, a thumbs up.

Then there are the tours of the neighboring subregions of Bordeaux. “If you love architecture and wine, Bordeaux (region) is the place,” says Miailhe.  Médoc is famous for the châteaux, some 1,500 vineyards, the ocean, beaches and pine forests filled with animals. Saint Emilion is a World Heritage Site, famous for its Romanesque cathedrals, limestone houses and a viticulture that dates back to the Middle Ages.

Wine lovers will appreciate the wine tours at Sauternes and Pessac, where travelers can learn more about the nuances of Bordeaux wine in the famous chateaux such as Yquem, Rothschild, Gironde and Sancerre.

“Keep one day for the city of Bordeaux. It’s gorgeous. The new mayor cleaned it up, put in the tramway and overhauled the riverbank. It’s the second most preferred city of France. We are proud of what the mayor has achieved. It looks like Disneyland but more real,” says Miailhe.

Bordeaux underwent a beautification program, starting with the removal of soot from its Medieval churches and old buildings and a reclaimed dockland. It has been modernized with galleries, concept stores, restaurants and wine-bars.

Aside from the châteaux, visiting the markets are enough reason to travel to France. The variety of cheeses, terrines, meats and breads astounds travelers. Miailhe cites coffee, foie gras, fresh produce and the famous classified rosé from Medoc as some of the popular things to shop for. “Food is important for the French and people in the Southwest,” says Miailhe.