Sea turtle comeback in a corner of the Caribbean | Lifestyle.INQ ❮ ❯ 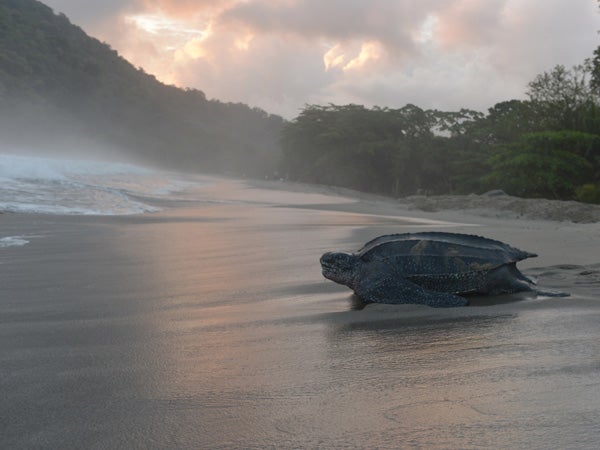 In this May 2, 2013 photo, a leatherback turtle heads back into the ocean after burying her clutch of eggs in the sand at daybreak on a narrow strip of beach in Grande Riviere, Trinidad. In years past, poachers from Grande Riviere and nearby towns would ransack the turtles’ buried eggs and hack the critically threatened reptiles to death with machetes to sell their meat in the market. Now, the turtles are the focus of a thriving tourist trade, with people so devoted to them that they shoo birds away when the turtles first start out as tiny hatchlings scurrying to sea. AP

Sea turtle comeback in a corner of the Caribbean

GRANDE RIVIERE, Trinidad— Giant leatherback turtles, some weighing half as much as a small car, drag themselves out of the ocean and up the sloping shore on the northeastern coast of Trinidad while villagers await wearing dimmed headlamps in the dark. Their black carapaces glistening, the turtles inch along the moonlit beach, using their powerful front flippers to move their bulky frames onto the sand.

In years past, poachers from Grande Riviere and nearby towns would ransack the turtles’ buried eggs and hack the critically threatened reptiles to death with machetes to sell their meat in the market. Now, the turtles are the focus of a thriving tourist trade, with people so devoted to them that they shoo birds away when the turtles first start out as tiny hatchlings scurrying to sea.

The number of leatherbacks on this tropical beach has rebounded in spectacular fashion, with some 500 females nesting each night during the peak season in May and June, along the 800-meter-long (875-yard) beach. Researchers now consider the beach at Grand Riviere, alongside a river that flows into the Atlantic, the most densely nested site for leatherbacks in the world.

With instincts honed over 100 million years, these mighty leatherbacks have migrated from cold North Atlantic waters in Canada and northern Europe to nest. The air-breathing reptiles can dive to ocean depths of more than 4,000 feet (1,200 meters) and remain underwater for an hour. They are bigger, stronger, and tolerate colder temperatures than any other marine turtle.

On a recent night, the protected beach was so busy that female leatherback turtles bumped into each other as they trudged up the sloping beach. Occasionally grunting from the effort, the big reptiles swept away powdery sand with their front flippers and then painstakingly dug holes with their rear flippers, laying dozens of white eggs before heading back to the ocean. These same females will be back in about 10 days to deposit more eggs.

The resurgence of leatherbacks in Trinidad is touted by many as a major achievement, with more than half of all adult leatherbacks on the planet having been lost since 1980, mostly in the Eastern Pacific and Asia.

When local conservation efforts started here in the early 1990s, locals say a maximum of 30 turtles emerged from the surf overnight during the peak of the six-month nesting season. Now, at Grande Riviere and in the eastern community of Matura, where another major leatherback colony has grown, locals say more than 700 of the turtles appear overnight at the very height of the season, in May and June.

Flourishing turtle tourism is providing good livelihoods for people in formerly dead-end farming towns, with the Trinidad-based group Turtle Village Trust saying it brings in some $8.2 million annually. The inflow of visitors, both domestic and foreign, to Trinidad’s northeast coast jumped from 6,500 in 2000 to over 60,000 in 2012. Officials with the U.S.-based Sea Turtle Conservancy say Trinidad is now likely the world’s leading tourist destination for people to see leatherbacks.

Hopes are high that tourism boom can help the creatures survive a slew of pressures. In a 2009 global study on the economics of marine turtle tourism, researchers from the environmental group World Wildlife Fund found turtle tourism earned nearly three times as much money as the sale of turtle meat, leather and eggs.

While Trinidad supports some 80 percent of total leatherback nesting in the Caribbean, with a population of some 15,000 females laying eggs every two years, the turtles are also flourishing in other spots around the region.

In northern Guyana, leatherbacks have become the most abundant marine turtle species instead of the rarest one as it was in recent decades. In neighboring Suriname, the creatures’ numbers have jumped tenfold, according to a 2007 assessment by the U.S. National Oceanic and Atmospheric Administration.

Earlier this year, Puerto Rico protected a swath of beach along the island’s northeast coast that hosts over 400 nesting leatherbacks per year. In 2012, Florida wildlife officials surveyed some 250 miles of beaches and counted some 515 leatherback nests.

Meanwhile, the Eastern Pacific leatherback population has collapsed to some 1,700 females, according to Aimee Leslie, marine turtle manager with the World Wildlife Fund.

The number of Atlantic leatherback has likely grown due to a variety of factors such as nesting beach protections, modifications of fishing gear in some places and increased public awareness, according to Jeanette Wyneken, a sea turtle expert at Florida Atlantic University. Leatherbacks may have also encountered growing stocks of the food they depend upon, mostly jellyfish and gelatinous sea creatures called salps.

Len Peters, a founding member of the Grande Riviere Nature Tour Guide Association, which patrols and manages the Trinidadian village’s nesting beach, said local conservation hasn’t come easy. When he started out as a 23-year-old volunteer in the early 1990s, protecting turtles was rough, sometimes intimidating work. His group would physically drag people off the beach if they were bothering leatherbacks.

“That kind of approach wasn’t really helping. People were becoming very aggressive toward us, called us the turtle police,” Peters said. “Now, the villagers here feel proud knowing that people come from all over the world to see the turtles. On a whole, the community has really embraced the opportunities these turtles have brought to them.”

But for local fishermen, the six-month turtle nesting season from March through August is a hardship to endure.

Ervan James, a veteran fishermen from Grande Riviere, recognizes turtle tourism has been a boon for his village, but he and other fishermen are calling for the government to compensate them for not casting wide gill nets during the turtles’ nesting season. Perhaps anticipating being paid not to fish, the number of fishing boats at Grande Riviere has expanded from three a few years ago to about 20 now.

Since sea turtles must surface at regular intervals to breathe, they drown when entangled in nets. Roughly 3,000 leatherbacks are snared off Trinidad’s nesting beaches each season, with about 1,000 of them drowning after getting caught in the net for an hour or getting their flippers hacked off by frustrated fishermen trying to untangle their damaged nets.

“This needs very urgent attention because too many turtles have been losing their lives in nets. For a night, five or six turtles could end up in one of these nets, you understand?” James said, pulling up some of a nylon gill net piled on the beach.

Conservationists have showed fishermen modified equipment, even distributing fish finder instruments, to help balance turtle protection with profitable fishing. But local fishermen continue to use gill nets instead of trolling with hook and line, insisting they work best during the time of year that leatherbacks swim offshore.

A looming and potentially greater threat is climate change. According to one modeling analysis, beach nesting sites for sea turtles in the Caribbean will come under significant danger due to beach erosion associated with sea level rise.

A warmer climate may also create too many females since turtle gender is determined by ambient temperatures in the sand where eggs are incubating. Cooler temperatures favor males, while warmer temperatures result in females.

“However, many turtle beaches already seem biased toward the increased production of females so it’s anyone’s guess whether the climate change scenarios will really change sex ratios,” said Scott Eckert, who has researched the turtles in Trinidad since 1992 as science director for the U.S.-based Wider Sea Caribbean Sea Turtle Conservation Network.

Even without such threats, the dangers are many. Experts have even long estimated that just 1 in 1,000 eggs will result in an adult turtle.

“These leatherbacks are the world’s last living dinosaurs,” said Alexander, the Grand Riviere tour guide, as three young apprentices learned to tag a nesting turtle’s flipper on the town’s beach. “We have to protect them for the next generation.”