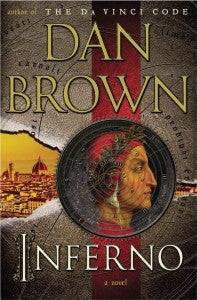 Like any would-be symbologists, readers encountering the cover of Dan Brown’s newest novel “Inferno: A Novel” (Doubleday, New York, 2013, 463 pages) for the first time should examine its elements.

They will notice a depiction of the Italian poet Dante Alighieri with the city of Florence in the background. They will find Latin words corresponding to some of the Seven Deadly Sins. They will also note that Brown’s name is set in a bigger font than the book’s title, something that was not true for Brown’s previous books.

That is important because it implies that Brown is a much bigger attraction for readers than the plot behind “Inferno.”

This was not always the case. For the 2000 novel “Angels & Demons,” he introduced Robert Langdon, the dashing professor of symbology who was summoned by the Vatican to deal with a shadowy conspiracy called the Illuminati.

It was the next Langdon book, 2003’s “The Da Vinci Code,” that made Langdon a sensational and controversial figure, as it featured the symbologist with an eidetic memory dealing with the alleged truth behind the lineage of Jesus Christ.

The third Langdon book, 2009’s “The Lost Symbol,” dealt with the secrets hidden in America’s capital, Washington, DC. By that time “The Da Vinci Code” was an international publishing phenomenon and Ron Howard had helmed two movies with Tom Hanks as Langdon.

In the process, Brown has become a divisive literary presence, with fanatical followers who adore his intricate conspiracies and spirited critics who dislike his uninspiring prose. All this makes a new Dan Brown book an object of note for both his fans and haters.

The book’s title refers to Dante’s famously disturbing poem of the same name, the first part of “The Divine Comedy.” Much like Leonardo Da Vinci was the key to unraveling the plot in “The Da Vinci Code,” clues related to Dante’s work help solve the mystery in this one.

The book immediately establishes the fact-and-fiction premise that Brown employs for the Langdon books: “All artwork, literature, science, and historical references in this novel are real.”

“Inferno” certainly has the catchiest beginning of any Langdon book. Shortly after an unknown man kills himself by jumping into the River Arno, Langdon wakes up in a hospital in Florence, Italy, with a head wound and no memory of  most of the last two days. He finds himself on the run with a doctor named Sienna Brooks, with armed soldiers and a black-clad woman on a motorbike hot on their heels.

As Langdon plunges into Florence’s corners, he discovers he is trapped in a tug-of-war between a mysterious woman with silver hair and a secretive, wealthy organization with secrets to spare.

“Inferno” keeps true to the other Langdon books in that it mixes science with history, and here it is cutting-edge DNA design that is part of the plot. The hidden circles of “Inferno” uncoil and Langdon attempts to find out what has happened in those missing 36 hours. His head swims with strange dreams and half-remembered words. “Seek and find… if I fail, then all is death.”

Brown draws from his bag of arcane tricks with several interesting puzzles for the reader and a chase that goes from city to city as the stakes get higher and the secrets come one after another.

Langdon jumps through the expected literary and historical hoops. Masks and money, deception and devotion: All these come to play in “Inferno,” which boasts a possibly world-ending threat.

“Inferno” has all the elements of a Langdon book, meaning, there will always be a secret passage that leads to freedom, and a historical puzzle that leads to the next clue. The prose may be pedestrian but “Inferno” is, in many ways, Brown’s most accessible novel.

That’s an important distinction because the dense chapters full of exposition made “The Lost Symbol” dull and almost unreadable. For “Inferno,” Brown has simplified the historical elements, though you will still leave the book with more information about Dante and Florence than you may want. Encyclopedic details still abound.

Instead of philosophical arguments, he has loaded “Inferno” with viciously head-turning twists and a whopper of a red herring. In effect, Brown has written the most conventional Langdon thriller yet, so conventional that it practically cries out for a movie; you can almost hear the Hans Zimmer score in the background.

That said, “Inferno” is a furious page-turner, leading the reader through city streets and action sequences. It is much better than the clunky “The Lost Symbol,” and probably as good as “The Da Vinci Code,” though it lacks that book’s hot-button urgency.

It still falls short of Brown’s best book, the superior “Angels & Demons,” but “Inferno” is an entertaining book that balances the modern and the Middle Age elements in an adventure that works just well enough to deserve the attention it’s getting.