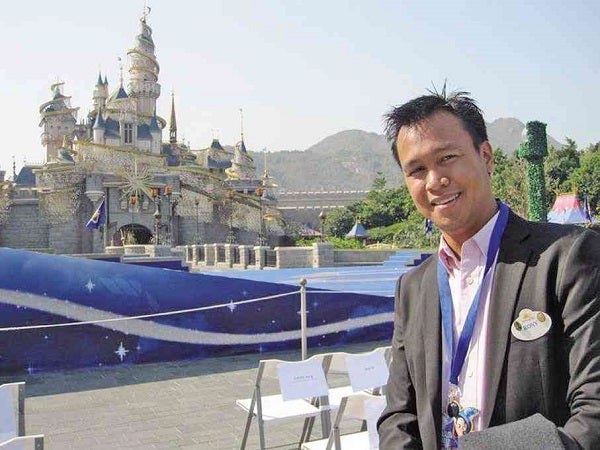 How Filipino talent continues to bring magic to HK Disneyland

In 2005, I was one of hundreds of Filipinos auditioning for a job at Hong Kong Disneyland.

I didn’t have to dance or sing, but the nerves and nausea were still there. You see, my audition for musical director was to run the audition, as Disney executives observed. It involved sight reading, teaching songs and working with the singers.

Among them was Ralion Alonso, theater actor and TV personality. I remember nervously whispering to him and other friends that day: “Hey guys, this is my audition too!”

Luckily, I didn’t have to wait too long before I found out that I had gotten in. And so did Ral. We were all excited, but truth is, nobody back then really knew what to expect from the job. We just knew we were gonna have fun.

Who knew that fun would be just the tip of the castle? The job would change our lives.

The Grand Opening team, as we called the group that opened Hong Kong Disneyland, had many talented Filipinos from many different dance groups, theater companies, and orchestras.

Vocalists came from all around too, including companies like Repertory Philippines, Atlantis Productions and Trumpets. I had worked with many of them in my time in the Manila theater scene, and I was thrilled to see them everyday at work.

On board in 2005 were two of Manila’s finest leading men of the theater, Noel Rayos and Roy Rolloda. I had worked with belters Jinky Llamanzares and Tex Ordonez in the Manila production of “Dreamgirls.” Thespians Pheona Baranda and Shiela Valderrama were also part of that opening team. They kicked things off and soon, others would follow.

Over the next seven years, other familiar faces from Manila’s theater scene would lend their voices to the entertainment world of HK Disneyland. Leading ladies Cris Villonco and Maita Ponce and theater heartthrob Felix Rivera have all essayed roles on the “Golden Mickeys” stage. Kakki Teodoro of “Batibot” fame sang and danced in the “High School Musical” show.

Theater-pop artists like Anna Fegi joined the cast of the “Festival of the Lion King,” and Raki Vega was in the “Golden Mickeys,” too. Their performances, along with those of the other Filipinos in the shows and parades all over the theme park, have earned much praise from Disney executives, guests from all over the world, and fellow Filipinos.

Their success is quite a tribute really to the Filipino dance groups, theater companies and orchestras that had prepared them all so well.

But recognition is only part of what draws hundreds of performers every year to Disneyland auditions. Walt Disney said, “My business is making people, especially children, happy.” And that’s it. That’s the key.

When your job is not only doing something you love to do, but making incredible memories for kids, young and old, to take back home, to look back on, to share—that’s the real fun. You put your marquee name aside for a while and become a Disneyland cast member, the heart of which is much more than just performing. It’s changing other people’s lives.

And that, in a word, is magical.

The author is on his seventh year as music director of Hong Kong Disneyland.