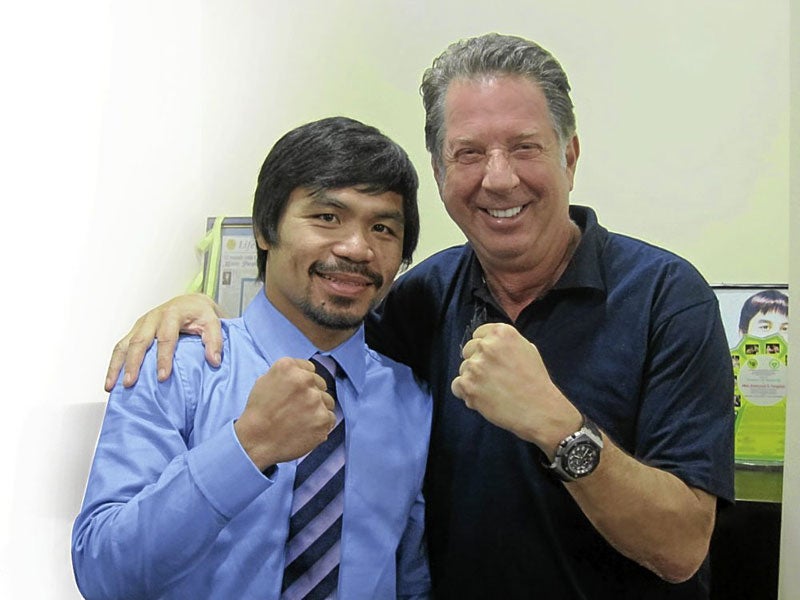 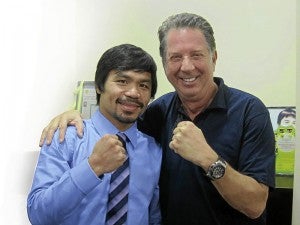 An organizer of the Pacquiao-Marquez match is fighting an opponent larger than life—world hunger.

In his lifetime, philanthropist Yank Barry hopes to feed a billion people. So far, his foundation has given free meals to 515 million worldwide in the past two decades.

“That excludes $200 million in medical supplies, education, scholarships, fielding doctors in Japan to help resolve high levels of radioactivity and metals in bodies,” he said. “My commitment to the world is to have a Day Without Hunger on Dec. 13, 2012, where we can simultaneously feed every hungry person.”

Who is Yank Barry? Why isn’t he listed among Forbes magazine’s wealthiest?

At 62, he has garnered 112 humanitarian awards for his work with the Global Village Champions Foundation (GVCF), which he founded with three-time world heavyweight boxing champ Muhammad Ali.

Barry visited Manila last week to promote GVCF and finalize negotiations with  Pacquiao as the new spokesman for his cause.

GVCF was born out of the success of his soy company VitaPro. Aside from Ali,  his other advocates include fellow Canadian Celine Dion and Michael Jordan. GVCF has partnered with Red Cross and Cooperative Assistance and Relief Everywhere.

“GVCF is the undisputed world leader in private humanitarian aid. Why private? We are not a charity. We have NGO status  in 42 countries. We have zero expense. Nobody is allowed to take a salary.”

He pointed out that with the weakening of Ali’s health, the foundation needs a new champion. “Muhammad can’t travel any longer. He’s 69 but he’s got incredible inner strength. He never charged or accepted a dime,” maintained Barry. “Manny Pacquiao is getting the torch to be the new ambassador.”

Barry is also one of the organizers of the Pacquiao-Marquez fight in November,  and will return for the press conference on Sept. 3. He is dangling an incentive for people to join his crusade, the Fight Against Hunger Draw.

“If you become a Global Village member for $10 or P490, every week, Manny will draw a pair of airline tickets, VIP seats to the fight, seats to the weigh-in, $1,000 cash in spending money, suites at Circus Circus hotel and limousine service to and from the fight. All of the money that’s raised will stay in the country where it’s raised. If the Philippines raises more money than anyone, they are going to feed more children and help more people,” he said.

Barry underscored that it is not a lottery. “There is no gaming or chance involved. The $10 that supports the cause is not a donation. You are becoming a Global Villager.  In appreciation, we are giving you prizes that you can win.”

Barry’s interest in humanitarian causes began in the music industry. As the lead singer of The Kingsmen, he sang “Louie, Louie,” a rock ‘n’ roll hit composed by Richard Berry. 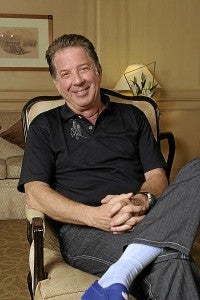 He also produced hits for Tom Jones  and Engelbert Humperdinck. The pressures of the music business drove him to substance abuse.

“It was a way of life in the industry. It gave you the capability to work 60-80 hours straight, until you’re not functioning anymore.  I buried a lot of friends—Jimi Hendrix, Janis Joplin,” he recalls.

He developed the campaign, “Cocaine: The Big Lie,” where a commercial featured two eggs sizzling on the pavement. “That’s what happens to your brain on cocaine,” he said.

In 1985,  his friend, composer Quincy Jones, was working on “We Are The World,” a song and campaign to provide food relief in Ethiopia. The song was composed with Lionel Richie and the late Michael Jackson. Barry’s involvement was on the philanthropic side.

“It was disaster, all done wrong,” he recalled. “None of us knew what we were doing—buying the wrong type of food, buying perishables. Thank God, I had the chance to fix that.”

After his stint with the music industry, he started playing golf and befriended the champions. He then ventured into sports management and managed such clients as Lee Trevino, Paul Lazinger and Ali. In a sports tournament in South Africa, Barry learned about texturized vegetable protein.

Barry began distributing it in North America and subsequently bought the South African business. He named his new venture VitaPro, which he claims is the largest finished soy product in the world, available in 51 countries and used by the world’s largest NGO’s. The company has offices in Montreal, the Bahamas where Barry resides, and Monaco.

After VitaPro’s first successful year in 1991, Barry felt his company needed a spokesman. He realized his best friend, Ali, had been a recluse because of Parkinson’s Disease. “The public had not seen him in so many years, yet he’s the most recognizable person in the world.”

Ali’s endorsement boosted the company to stratospheric heights, bringing in hundreds of millions in sales.

In their country visits, Ali and Barry encountered depressed areas. “We started feeding kids. It was not consciously done. I was making huge profits, then I said, ‘Let us ship an extra 30 tons.’ That’s when we started doing things with Red Cross, Red Crescent, Rotary, C.A.R.E., Unicef.  We fed millions of kids with no records. It was VitaPro taking some of its money and doing some goodwill very quietly.”

Asked on VitaPro’s earnings, Barry replied, “My company is terribly private in a bunch of countries. I’m a resident of the Bahamas. I don’t pay tax. I’m not American. Let’s say we do over a billion dollars in business. How much I earn is up to me. I give it to kids. I made a deal with God that whatever I save in tax, I give to kids.” 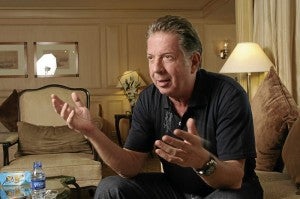 He claims among his assets are various businesses such as his chain of aesthetic centers in Bangkok, five InterContinental hotels worldwide, brokerage firms, and the world’s largest collection of Degas paintings, which is touring the world.

He admitted that their program was initially done in a “helter-skelter” manner. “Feed here or feed there. Now we’re involved in programs. I would rather take smaller groups. It’s better to help 50 children in 365 days than feed 50,000 children for two days. We focus on groups that we could follow. We could see the success and the work makes a difference.”

Despite his noble activities, Barry sought to clarify the negative press on him. He clarified that news reports on his “shady past” were “embellished.”

The most-publicized were his trials in the US. For many years, VitaPro was the sole supplier for meat replacement in schools and prisons in Texas. When George W. Bush became governor, the state canceled its contract with VitaPro. “I sued them. It became fairly nasty. I met with Bush several times.”

In 2001, at the onset of Bush’s presidency, Barry was convicted of bribery, fraud, money laundering and conspiracy. He was charged with giving a $20,000 bribe to the former Texas prison chief for trading in a $33.7-million deal in 1996 to sell his soy-based VitaPro meat substitutes to the prison system.

Barry’s wife Yvette is coming out with a book this year that will reveal his ordeal, which nearly brought down his business. He added that plans are afoot for a Hollywood movie.

Barry is putting his past behind him, including VitaPro, which has been sold for a 10-digit figure. He’s putting his energy into GVCF and the Pacquiao-Marquez match.

“People in general like to give, but it’s so  hard to get that charity dollar because there are so many causes and there is so little money for the people to give. How do you get the public involved without expecting any donation and begging?  Create contests. You become the flavor of the month.”