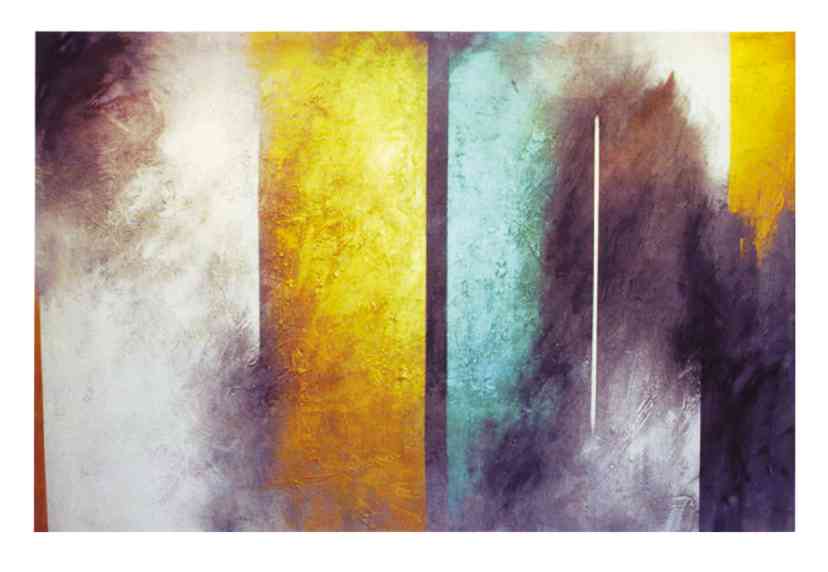 Rico Loscano’s ongoing 11th solo exhibition at the Astra Gallery is right on track, as organic as the passing seasons, shifting in mood and temper, but ever sustaining the artist’s commitment to nature and the elements.

For the past several shows, Lascano himself proceeded from a more methodical style of painting than Steir. The artist has proven that in his works, meaning not only insinuates, but emanates, from both his artistic attitude and technical approach to color, space and form.

Recall that in Lascano’s previous shows the image and theme of water played a central role. In his allusions to bodies of water—ponds, rivers, streams, vapors—meaning “condenses” into palpable existence. There is no disconnect between the meaning communicated to the viewer and the physical evidence apparent on the canvas.

In this recent series of new works, titled “Portals of Transcendence,” Lascano journeys to the very edge of meaning, where the viewer, in his own visual voyage, stands at the threshold of a deeper space, an afterlife, beyond which the image ascends into spiritual states or passages, peering into the unknown. Lascano’s works are richly allusive, referring to Christian, Buddhist and Hindu spirituality.

A sweeping span of canvas, 4ft x 6ft, heralds the lifting of a stage proscenium. “August Light” is a reference to St. Augustine’s famous passage in his “Confessions”: “If to any man the tumult of the flesh grew silent, silent the images of earth and sea and air.” Lascano’s works are by turns an affirmation of absence, with their spare and solemn division of space, and a negation of presence in the resonance of the void.

Another striking work is “Nirvana,” a term which may seem familiar enough to the reading public. It is still worth noting, though, that “the word Nirvana means ‘to extinguish,’ such as extinguishing the flame of a candle. This ‘extinguishment’ is not understood by Buddhists to mean annihilation, however. Rather, it is thought of as passing into another kind of existence.”   (Barbara O’Brien)

A sumptuous spiritual trove is the mysticism inherent in Hinduism. Thus, Lascano paints “Pranayana,” referring to the Sanskrit word that means “focusing on the breath,” which the artist configures as the energy of inhalation and exhalation with wispy, feathery brushstrokes. Visual contemplation transports the viewer into a deep meditative state.

Impressively, “Portals of Transcendence” is, to my mind, the best so far in Lascano’s annual prolific offerings. The artist manifests a deeper, more mature discernment not only of the technical aspects of artmaking but also of the meanings evoked and engendered by his spatial expeditions.

From the nebulous and the ephemeral, Lascano summons qualities of radiance and luminosity, throwing off poetic sparks.