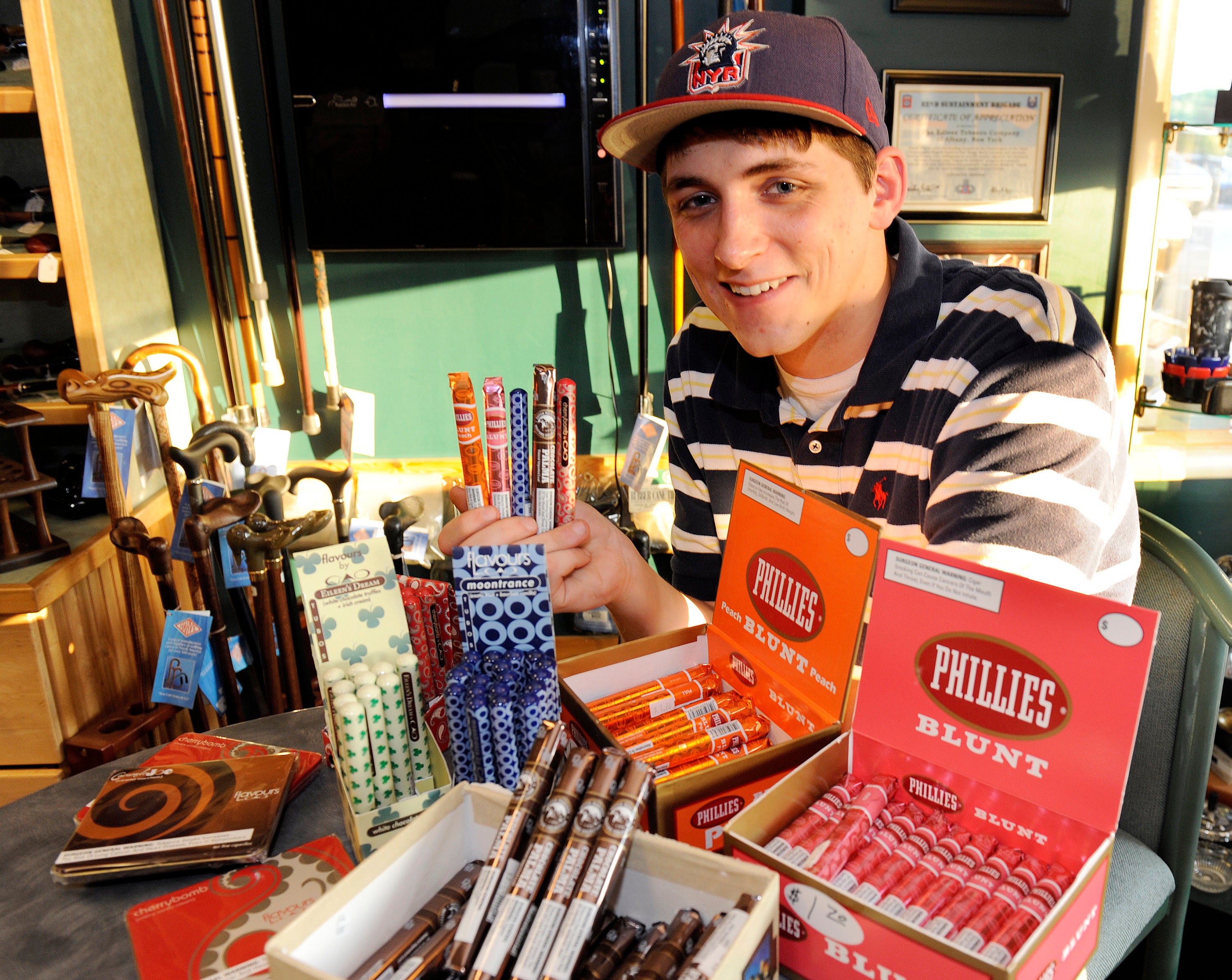 Cigar enthusiast Brendan Glennon poses with a display of candy-flavored cigars at a custom tobacco shop in Albany, N.Y., Friday, May 31, 2013. The American Cancer Society is pushing to make New York the first state to enact a comprehensive restriction on the sale of candy-and fruit-flavored cigarillos, chewing tobacco and tobacco used in water pipes. AP photo

ALBANY, New York — They come in brightly colored, shiny packages in fun flavors like chocolate, blueberry, gummy bear, wine and pink berry. But the American Cancer Society says the little cigars and packages of loose tobacco are aimed at kids and are just as deadly as cigarettes.

The American Cancer Society is pushing to make New York the first U.S. state to enact a comprehensive restriction on the sale of candy- and fruit-flavored cigarillos, chewing tobacco and tobacco used in water pipes. Its proposal would restrict the sale of all fruit- and candy-flavored tobacco products to tobacco shops, banning those products from convenience stories.

Maine bans the sale of larger “premium” flavored cigars and other states including Maryland have proposed laws, according to the University of Maryland Law School. New York City and Providence, Rhode Island, also have restricted the sale of flavored tobacco.

“If New York acts, it would be the first state in the nation, and turbocharge efforts nationally,” said Blair Horner, vice president of advocacy at the American Cancer Society and Cancer Action Network of New York and New Jersey.

The little cigars, chewing tobacco and loose tobacco for use in water pipes are sold individually for as little as 99 cents or in packs and avoid stiff cigarette taxes aimed at dissuading young people from smoking.

“I couldn’t believe this when I saw it,” Horner said. “Lawmakers may not even know about them … this ease of access of cheap, tasty, and deadly tobacco.”

New York law prohibits the sale of tobacco products to anyone under age 18. But anti-smoking advocates say restricting sales to adults-only smoke shops would stymie illegal sales and hinder youths purchasing cigarettes through an adult who buys them at a corner store.

Not everyone agrees with the proposed crackdown on sweet smokes.

“This is an adult product, like you have flavored liquors,” said Audrey Silk, founder of NYC CLASH, a national smokers’ rights group based in New York City. “The flavoring is an excuse to exploit the emotional driven ‘for the children'” attitude. “Adults should be allowed to smoke flavored tobacco. There are already laws that exist that restrict sales to minors.”

Driving flavored cigars and other products out of convenience stories will simply drive sales to unregulated sources, such as the Internet, the mail, or Indian tribes, said Calvin, President. New York Association of Convenience Stores.

A tobacco industry spokeswoman had no immediate comment Friday. Tobacco companies have said they oppose smoking by those under age 18. The companies have mounted extensive efforts to curb youth smoking and some of the billions the companies paid in a nationwide court settlement have been directed at keeping minors from starting to smoke.

In 2009, the U.S. Food and Drug Administration banned candy-, fruit- and clove-flavored cigarettes. Federal health authorities and regulators say those products appeal especially to young people and are thought to attract new smokers. The FDA says 17-year-old smokers are three times as likely to use flavored cigarettes as smokers over the age of 25.

The agency says almost 90 percent of adult American smokers picked up the habit as teenagers, and it estimates the 2009 ban helps prevent an average of more than 3,600 young people each day from starting to smoke.

The ban on manufacturing, importing, marketing and distributing flavored cigarettes didn’t include menthol cigarettes or some flavored tobacco products such as cigars. The FDA is studying those products.