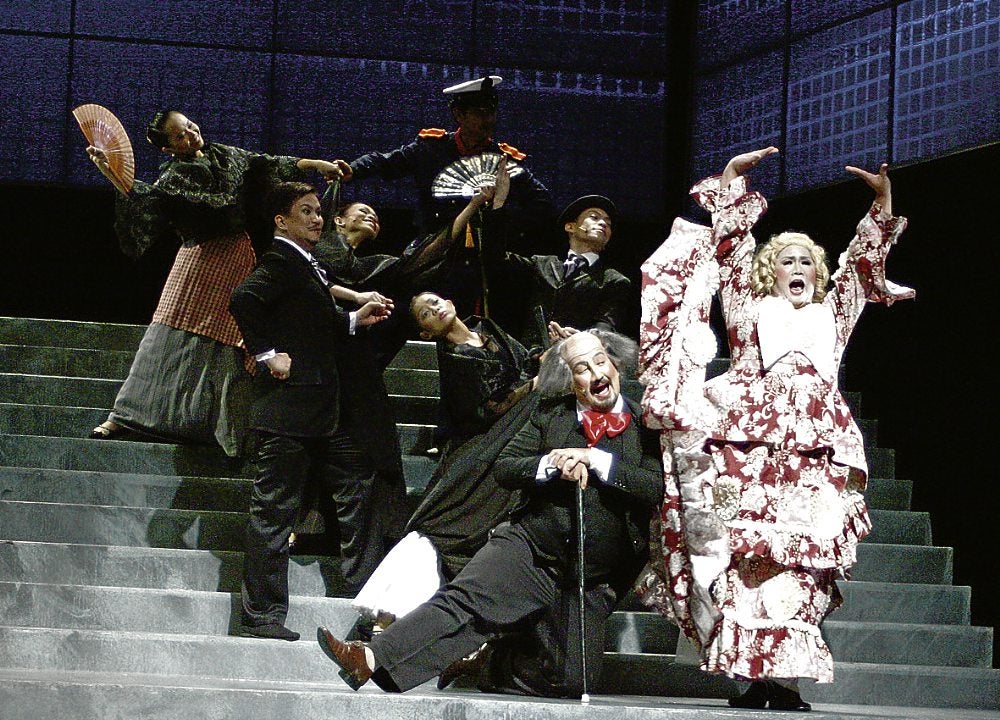 Love, loss and the ‘Noli’ 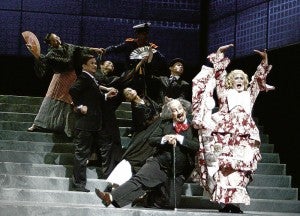 The theater company, with 25 years of unparalleled repertoire, first staged “Noli” in 1994, under the direction of Nonon Padilla.

Based on the 1887 novel of Rizal, the libretto is written by National Artist for Literature Bienvenido Lumbera, with music by Ryan Cayabyab.

Audie Gemora, one of the finest artists in Philippine theater and who played Ibarra in the original production, directs this version.

The novel, with its medley of intriguing characters from the various strata of a colonial society and its intricately woven subplots, seems to translate with difficulty on stage. As he has done with “Banaag at Sikat” (a 2010 TP production based on Lope K. Santos novel), Lumbera wisely dwells on select scenes and re-imagines them to introduce characters, disclose motivations, and delineate relationships.

The period musical highlights the love relationship between Crisostomo Ibarra and Maria Clara, doomed by the devious machinations of Padre Salvi, the domineering interference of Padre Damaso, and the shocking truth about Maria Clara’s birth. Against the backdrop of a love story is a Philippine society waning under the shadows of the Spanish colonizers.

Certain scenes implicit in the novel are foregrounded in the play, such scenes as Padre Damaso’s secret affair with Pia Alba, the mother of Maria Clara, and his loss of her letters which become instruments of incriminating evidence in the hands of the finder; and Padre Salvi’s cruel revelation to Maria Clara in her chamber. These are literalized and drawnout on stage through enactments, song monologues and interactions. 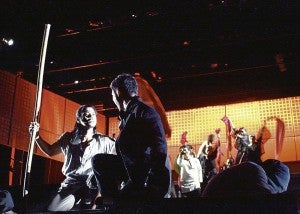 The simplicity of the set design—a wide and oversized stairway with tiers for actor positioning and scene-staging—has its charm and drawback. The audience, undistracted by other competing spectacle, devotes their attention to the characters (a beauteous pair, Maria Clara is played by Cris Villonco and Ibarra by Gian Magdangal) and the eloquence of their voices.

“Noli” presupposes that majority of the audience is familiar with the novel’s basic plot, characters, and manifold settings. A lone divan may signify Maria Clara’s bedroom; or a bangka the lake episode foreshadowing Ibarra’s escape.

But the economy of the set defuses the play’s visual theatricality (the epic possibility of such drama); and the locality and atmosphere of each scene appear indistinguishable.

Consider, for instance, the opening scene—a party. A clutter of characters is seen talking and gesticulating moments before the entrance of Ibarra. The locale is not plainly verbalized, but every student of Rizal knows by heart that this is the interior of Kapitan Tiago’s house.

In the novel, the gathering depicts Binondo’s unique three-gremio structure, the gender segregation of the period, and the multi-cultural richness and contradictions of a community that once formed the commercial capital of colonial Philippines—these are but barely evoked in the play. Binondo, as well as San Diego, is a remarkable character in its own splendid right.

There is minimal “action” in the play-except for the wheel-of-fortune and picnic scenes.

Ibarra, with his perpetual overcoat (shades of Rizal), is a visual standout. Maria Clara, with her flowing tresses and in a delicate saya is lovely to behold.

The rest of the characters—whether they be Sinang or Victoria, Albino or Leon—seems to diminish in the background because of their less impressive earth-brown costumes (what class do they belong to?).

Events thus are primarily narrated or revealed through song monologues and exchanges. Some of the more memorable ones include Kapitan Tiago’s world of saints, and the boat scene of Ibarra and Elias (intense performance by Jerald Napoles).

“Noli” is decidedly an emotional drama, and this perhaps is its foremost asset.

Exquisite is the voice of Villonco as she pours out the pain and confusion of a girl torn between her desire to protect her mother’s repute and her love for Ibarra. The depth of her suffering (sadly marred by our Victorian construct of Maria Clara as frail, limpid and submissive) arouses in the audience a compassion for her ordeal and justifies her being called a “saint.” There could only be one term to describe such rendition: beautiful sorrow.

Over a century ago, Rizal’s novel was a poignant story of love and loss. It still is.