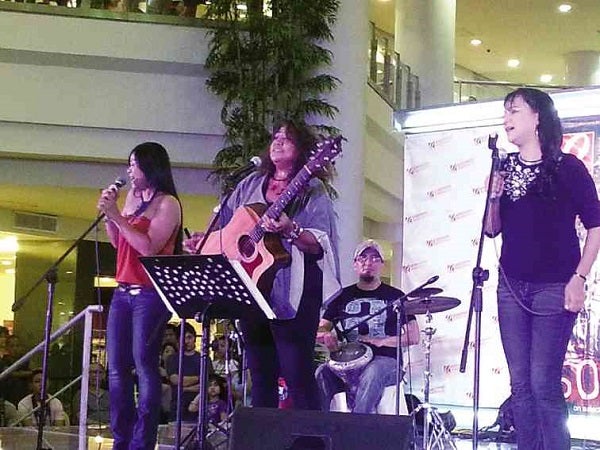 Epiphany in a Manila mall, euphoria in a Makati club

Robinsons Place Manila (bounded by Padre Faura, Adriatico and Pedro Gil Streets) has no clubs with live gigs, but a few Sundays ago it featured a rare performance of three female singer-songwriters who have banded together for a side project called Tres Marias.

Composed of Lolita Carbon (formerly of the premier Pinoy folk group Asin), Bayang Barrios (ex-member of Joey Ayala at Ang Bagong Lumad) and Cooky Chua (lead singer of Color It Red), Tres Marias reportedly invited executives of the new record label Curve to watch one of its gigs at ’70s Bistro in Quezon City; the guys liked what they saw and signed up the trio in an album deal soon after.

Recording for the album is in progress, with a cover of Florante’s “Sana” said to be one of the tracks.

At the Robinsons activity center near a row of restaurants, a sizeable crowd gathered and occupied all the seats provided for the Tres Marias engagement an hour before showtime.

The sun was about to set, perfect for happy-hour drinks, but we thought it was too early to indulge; we decided instead to have a healthy smoothie at Jamba Juice while waiting for the gig to start.

We bumped into Cooky and Bayang walking around the mall, probably looking for a place to eat. By this time, not too long ago, Cooky would have been taking sips of Tanduay Rhum and, more recently, Emperador Brandy, to calm her nerves. But we guessed she has gotten used to being straight now before she goes onstage, or perhaps she was just in no mood to take alcohol at that hour.

In any case, the show began with Bayang—accompanied by her husband, guitarist Mike Villegas, and percussionist Budeth Casinto—performing “Biyaya,” the title track of her fourth solo album released in 2008. The song’s upbeat ethnic rhythms and exultant Bisaya-Tagalog lyrics put the crowd at ease and warmed up the cold surroundings.

As Cooky joined her in the second number, a cover of Asin’s “Gising Na, Kaibigan” (which Bayang recorded in her latest CD, “Malaya”), it became apparent that this gig would be a showcase of insightful Filipino songs—music that pricks the senses and nourishes the soul.

Cooky’s turn to sing solo on Sampaguita’s “Tao” (in our belief, the greatest Pinoy rock song of all time) almost tempted us to dash off to a nearby Japanese restaurant for a quick beer in can, but then our mind also told us that, hey, do you really need anything else aside from your eyes and ears to savor this moment?

While the folk classics “Himig ng Pag-ibig” hummed with romanticism and “Ang Buhay Ko” narrated an artist’s life of struggle, it was “Usok”—a reggae nugget which Lolita recorded in 1981 as a solo act with “The Boys” backing her up—which got everyone to really loosen up and, in our case, dance.

When the Tres Marias joined forces in “Sana,” it was obvious that the trio have yet to nail down the song tightly, as Lolita fumbled with the lyrics while Bayang and Cooky chuckled.

But no matter. For the past hour or so, they nudged us to believe that classic Filipino folk and rock have not been forgotten and remain an inspiration to the masses. We saw it in the audience’s rapt attention throughout the show.

Cheers to the Tres Marias!

Last week we took some balikbayan friends to Strumm’s, the club on Jupiter Street in Makati that has given many pop, rock and jazz bands a place to play regularly.

It must be pointed out that Strumm’s is one club that has successfully operated since it opened in 1992, and credit goes to its loyal crowd and, of course, the commitment of its owners composed of Mari Lagdameo, Louie Guerrero, Rudy Bautista, Eddie Santos, among others. (The late Louie Prieto and EJ Litton were once co-owners, too.)

Strumm’s is likewise one of the few places in the city that encourages artistic freedom notably among jazz artists, who have only a few venues to perform in, especially in the wake of the closure of Vineyard, Birds of the Same Feather and Birdland, and hotel outlets like Calesa Bar in the 1980s.

The band’s take on Bill Withers’ “Lovely Day” retained the original’s R&B flavor, but had an edgier, teasing tone, and was driven by an irregular time signature.

A wonderful surprise was a cover of Chicago’s “Call on Me”—which soothed our tired nerves while we devoured tuna sashimi (P260) and mixed pizza (P250) washed down with San Mig Light beer (P80).

We never thought “God Bless the Child” could sound refreshing in a Latin/samba groove; the finger-tapping, cool-jazz tempo of Fourplay’s “Fortune Teller” had the performers and audience connecting on the same wavelength; most of all, the enduring importance of fusion via Jeff Lorber’s “What It Is” brought us back to imagine the thrill of a joyride in a Porsche on wide, open roads in some European country.

That’s the euphoria that an exceptionally good Filipino jazz band could induce.