DC Comics superhero is from the Philippines | Lifestyle.INQ ❮ ❯ 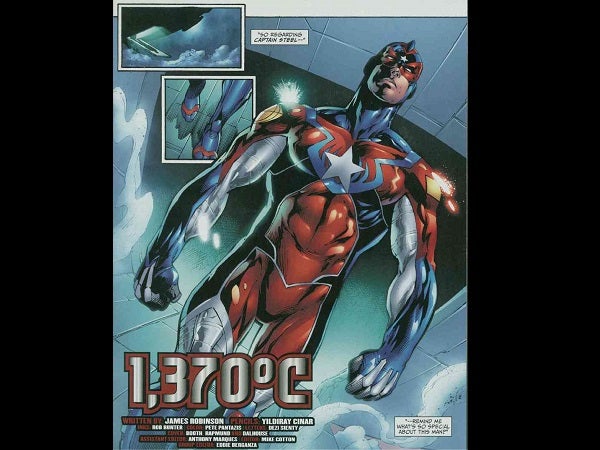 DC Comics superhero is from the Philippines

Believe it or not, the Philippines appears in mainstream American comics fairly often, though the country is usually shown being ravaged by a natural disaster—a tidal wave or a volcano erupting—and is in the process of being rescued by a superhero.

Sometimes, the superheroes can speak a little Filipino while they’re at it—even villains do it occasionally. A Filipino artist will sometimes drop a visual reference or two, such as when Leinil Yu had an alien shape-shifter take on the appearance of a certain former Philippine president in an issue of Marvel Comics’ “Secret Invasion” miniseries.

What is extremely rare is for a superhero appearing in DC Comics, Marvel, Image Comics or Dark Horse Comics as a Filipino character.

The Filipino superhero who has appeared in American comics is Salvador Joel Alonday, the erstwhile Philippine Scout Ranger with energy powers code-named Grail. Created by Filipino-American comics artist Whilce Portacio for his “WetWorks” series in Image Comics, Alonday debuted in “WildC.A.T.S” #2 in 1992. Portacio later gave a supernaturally Filipino feel to his series “Stone” for Avalon Studios.

The earliest appearance by any kind of Filipino character in Marvel Comics is the badly stereotypical, bolo-wielding villain Ginaldo, a Filipino assassin working for the Japanese during World War II who appears in 1941’s “Marvel Mystery Comics” #26, according to Marvel’s Wikia.

Marvel gave the Philippines its own super team when writer Matt Fraction and artist Salvador Larocca introduced the Triumph Division in “The Invincible Iron Man” #2 in 2008. They had a headquarters known as Triumph Hall, and teamed up with Iron Man to battle longtime nemesis the Mandarin. Iron Man’s alter ego, Tony Stark, also hired a Filipino scientist named Timothy “Tim” Cababa for his new company, Stark Resilient.

DC Comics had its first recurring Filipino character in Manuel Lago, an old friend of the Flash (Barry Allen), but he essentially became the duplicating clone villain Mob Rule in Filipino-Canadian writer/artist Francis Manapul and Brian Buccellato’s “The Flash” #4 in 2011.

DC has never had a hero with Filipino roots until now. In “Earth 2” #13, which shipped to comic shops last June 5, the character known as Captain Steel was revealed to have Filipino origins.

That continuity was erased after DC’s “New 52” reboot. The series “Earth 2” featured a parallel world where the invading forces of the planet Apokolips had killed Superman, Wonder Woman and Batman—thus paving the way for a new generation of heroes, called “wonders.”

Thus, “Earth 2” #13 had the World Army’s Commander Khan describing Captain Steel this way: “Although an American citizen, he’s native Filipino—born in the Philippines. His father—natural or adopted, we’re still unclear—wanted the best for his son.”

But Hank Heywood Jr. suffered from a congenital defect causing his bones to grow increasingly brittle. So, his scientist father created a metal substance and replaced his bones, organs and limbs with it, giving him super strength (this was also pretty much the origin and superpower set of the previous Steels, along with a degree of invulnerability).

Additionally, Captain Steel has gained the ability to control anything made of metal. This version of Steel was created by writer James Robinson and drawn by Yildiray Cinar. Captain Steel makes one heck of an initial impression as he pilots an experimental craft known as the Red Torpedo into an Apokolips Fire Pit in Brazil, only to emerge alive but injured and on fire.

In March, Robinson told reporters he was including a Filipino superhero to add diversity to the book. That proved to be Captain Steel. Robinson, however, has since left the title after finishing “Earth 2” #16, which likely ships in September or October.

Who knows what’s in store for DC’s first superhero from the Philippines?

Budjette Tan, cocreator of the comic book series “Trese,” says: “Considering how we Pinoys are so proud of fellow Filipinos whenever they win competitions abroad, even if they’re just 1/4 Pinoy, we already feel like we also won! If the character is handled right, then he can be a hero that Pinoy kids can look up to.”

Tan cites the trickle-down effect of having a young Hispanic hero like the new Blue Beetle or an African-American teen like the current Ultimate Spider-Man: “Kids can easily imagine themselves as those heroes.”

Says Paolo Fabregas, writer/artist of “the Filipino Heroes League”: “If we can look heroic in any aspect in Western media, I’ll take it. There may be more Filipino characters. There are millions of us in the US and our numbers are still growing, so we’re getting difficult to ignore. Is there a need for such characters? Well, I guess that would depend on the author’s intentions. I hope that they give a just depiction of us.”

Tan adds: “If the story calls for it, it would be great to see more Filipino characters from the big four. It would be inspiring to see a Pinoy character in the comics we read on a monthly basis.”