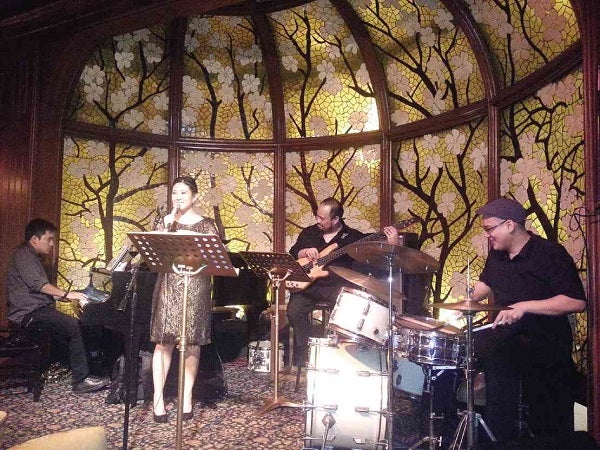 For the past several years, some hotels in the city have been featuring music acts that don’t belong to the typical “variety pop” mold.

In the few times that we’ve seen the band play, we took note of its double lineup of singers, guitarists and drummers.

Why so many members? “We just wanted to make sure that when some of them can’t make it to a gig, there will always be others who can fill in the gaps,” Locsin said. In fact, he himself couldn’t play on the night we visited, and was just hanging out before leaving to attend to a personal matter.

Joining our table were Mandarin’s F&B director Peter Psyk, Martinis manager JP Lizot, and director of communications Charisse Chuidian, who, it turned out, was watching the Blue Rats for the first time.

Psyk and Lizot talked a lot as the band played its second set; the guys were telling us that they’ve been on the lookout for more good bands. It was quite an effort to keep up with the conversation while listening to music that expressed sadness, joy, frustration and thrill through emotionally charged vocals and screaming guitars.

But the sound that the Blue Rats performed did not confine itself to the raw, Delta blues style favoured by most Pinoy bands that have adapted this traditional American roots music genre. And yet, whether the Blue Rats, by virtue of its multiple lineup of musicians, would rather explore Chicago blues and its big, fat aural elements (rolling bass, twin guitar attack, weaving harmonica), plus ample doses of R&B, the band nonetheless stuck close to the core of it all: music that rocks because it’s honest and witty.

Aside from the band’s covers of familiar classics (“The Thrill Is Gone,” “Bright Lights, Big City,” “One Way Out,” “Chain of Fools”) and contemporary hits (“Hard to Handle”), what got us grooving were its versions of Janis Joplin’s “Piece of My Heart,” Irma Thomas’ “(You Can Have My Husband But Please) Don’t Mess with My Man,” Bonnie Raitt’s “Let’s Give Them Something To Talk About,” and the coup de grace, the Allman Brothers Band’s “Whipping Post.”

Lapuz excellently did justice to her vocal parts, although Torre could use a little more soul in her solo spots. Puyat’s guitar ad libs combined technical proficiency and spontaneous feel. Sanchez seemed to be elevating on a higher plane while coaxing notes from his axe but Epperson couldn’t fly on his harp-blowing, perhaps due to faulty sound mixing.

In any case, running around in circles looking for a nice place to hear the blues should no longer be a problem for expats and locals alike, because there are two resident bands at Martinis to indulge in: the Manila Blues Experience and the Blue Rats.

And by the way, two items in the bar chow menu, Buffalo Wings and Samosa, go well with Chilean red wine.

For the past few months we’ve been wanting to catch Margaux Salcedo (yes, the Inquirer Lifestyle food columnist), who has a regular singing gig at the Tap Room of the Manila Hotel. But we were always bothered by a nagging thought: Can she really sing?

It took a short but intriguing recommendation from Inquirer Opinion columnist Neal Cruz to finally push us to go and see her show. Downpour, flashfloods and stalled traffic notwithstanding, we made it to the Tap Room for the last 30 minutes of Salcedo’s final set.

It turned out that her pianist, Romy Posadas, couldn’t leave his house due to the bad weather.

However, since the show must go on, Salcedo was backed by Archie Lacorte (of the Brass Munkeys) who stood in for Posadas on piano, Noel Asistores (bass) and Lawrence Nolan (drums).

There was something unique in Salcedo’s singing of standards—her take on “What a Wonderful World” had a slight vibrato that bore traces of a classical bent. This was confirmed further on her version of “Over the Rainbow,” which she sang without veering far from the original “Wizard of Oz” film soundtrack.

In between these numbers, Salcedo called a friend, Charo Logarta, and later, her dad, Ephraim Salcedo, to jam with her. The latter’s casual, playful rendition of “Fly Me to the Moon” had his daughter making faces and trying to stifle a laugh.

In that short span, we surmised Salcedo is a music dabbler who has the basic knowledge and fun attitude that would please a chill-out audience.

“She’s doing it as a hobby,” whispered Ginny Banaag, Manila Hotel senior vice-president who’s responsible for bringing back the jazz gigs in the hallowed grounds where the likes of Benny Goodman and other legends once played.

We were persuaded to try the Manila Hotel Pizza, whose crunchy dough tasted real good; the Schublig likewise was memorable for its juicy meat, which went well with the Japanese-made Asahi Beer.

Joining our table after her set, Salcedo seriously explained her classical leanings: “My lola, Sally Cuadra Salcedo, was a lyric soprano and a voice teacher.”

At the same time she giggled while recalling her past jobs as GMA 7 newscaster, Erap spokesperson, among others. She said she learned something after being downed by dengue near Mt. Carmel Church in Quezon City: “Never wear shorts while jogging there. Magagalit ang Diyos.”