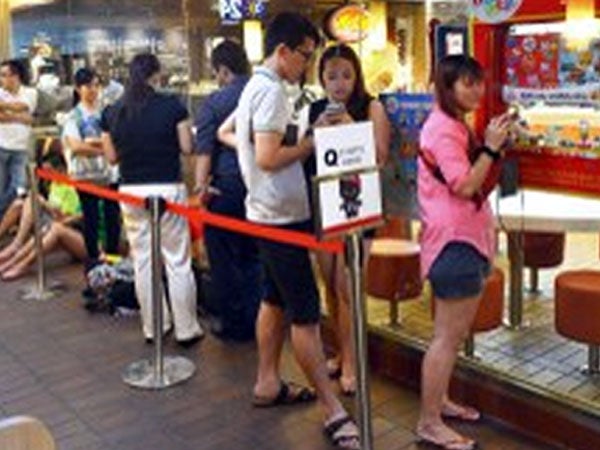 his photograph made available by The Straits Times newspaper on June 27, 2013 shows people waiting in a queue to purchase a Hello Kitty toy in a skeleton outfit at a Mcdonalds restaurant in Singapore. Tempers flared and police had to be called in on June 27 as anxious Singaporeans rushed to McDonald's outlets to buy Hello Kitty plush toys being sold by the fastfood chain as a promotion. AFP PHOTO / STRAITS TIMES

SINGAPORE — Tempers flared and police had to be called in Thursday as anxious Singaporeans rushed to McDonald’s outlets to buy Hello Kitty plush toys being sold by the fastfood chain as a promotion.

Hundreds had begun queueing from Wednesday night to get their hands on a kitten in a skeleton outfit, depicting a character from the German fairy tale “The Singing Bone”.

It was the last of a series of six limited-edition Hello Kitty characters dressed in different outfits from popular fairy tales which were being sold by McDonald’s this month.

In some outlets, chaos broke out amid rampant queue jumping as supplies of the toys ran out soon after the stores opened for business on Thursday.

One video uploaded on YouTube showed police officers mediating between two customers in front of a McDonald’s counter.

Another showed an irate man asking an agitated crowd “Is he Singaporean? Is he educated?” apparently in reference to someone who had gotten a queue ticket ahead of others.

Some customers took to Facebook to register their anger after they went home empty-handed, while others immediately put the toys — sold for Sg$4.60 ($3.62) with set meals — up for sale online at far higher prices.

Some Singaporeans are obsessed with completing the entire collection.

Others voiced their annoyance at compatriots who had let their Hello Kitty mania run out of control.

Singapore last went into a Hello Kitty frenzy in 2000, when McDonald’s sold a series of the toys in wedding outfits to usher in the new millenium.

Hello Kitty, which started in 1974 in Japan as a moon-faced cartoon cat on a coin purse, has developed into a global cultural phenomenon.

Sanrio, the Tokyo-based company behind the Hello Kitty industry, says it now has around 50,000 different products on sale in 109 nations and territories.

Kitty mania is also well established in Hong Kong where both men and women line up for hours outside McDonald’s outlets during promotional schemes.

In 2008, Japan appointed the character as its goodwill tourism ambassador to China and Hong Kong.