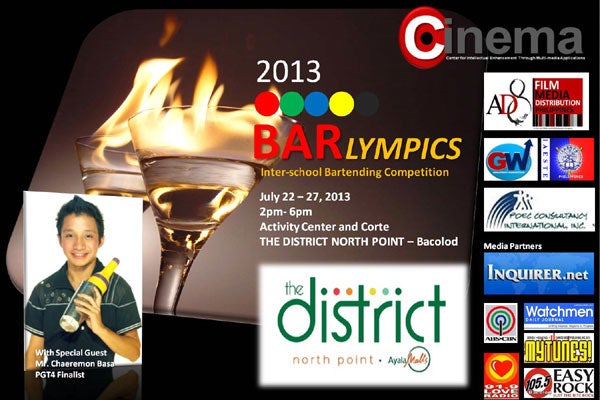 MANILA, Philippines — The District North Point will host the 2013 Barlympics.

The inter-school bartending competition will start on July 22 until the 27th.

It will open at 2 p.m. at the Activity Center and presented by the AD8 Film Media Distribution-CINEMA (Center for Intellectual Enhancement through Multi-media Application), with Greatway Marketing-Bacolod in cooperation with POEC Consultancy International and IAESTE (International Association of Exchange Students for Technical Experience).

Bacolod’s biggest event in bartending at the metro’s newest mall destination, The District North Point, gathers all the best Hospitality Management Colleges and Universities featuring their best students as they compete for the grand prize — an International Internship Scholarship by POEC and IAESTE Philippines in Vietnam.

The event will also feature performances by the Bacolod Flare-tending Club with Pilipinas Got Talent Season 4 Finalist and Bacolod’s Pride — Chaeremon Basa.

This seven-day competition is a project of CINEMA Skills Development Program of AD8 Film Media Distribution, which aims to work hand in hand with the academe in providing alternative media of learning and skills development.

Bacolod’s series of skills development events will be launched starting with the Barlympics, followed by the Campus Runway (A student fashion designing workshop and competition) from August 3 to September 17, the 2013 Negros Youth Entrep Congress  (an  inter-school entrepreneurial congress) on September 21-26  and the finale — the 2013 Bacolod Cosplay Expo from September 30 to October 12 — all at the District North Point. (advt)